While Barrick Gold Corporation – world gold industry leader with a portfolio of 27 operating mines and 10 development projects across five continents – is expecting its international production to drop by up to 6.5% in 2009, the company’s Africa region is on track for an increase of between 30% and 46% in output this year, compared to 2008.

These figures were confirmed by Barrick Africa regional vice president Gareth Taylor in an interview with Mining Review Africa.

The biggest single reason for this rise in output is the fact that the US$400 million (R3.2 billion) Buzwagi mine poured its first gold in early May. “It is expected to produce 200 000 oz in 2009,” Taylor revealed.

A view of the open pit at North Mara

Situated in north-west Tanzania, 120 km south of Mwanza, Buzwagi will be the second largest mining operation in Tanzania, and the largest single open pit in the country. Proven and probable gold reserves are 3.3 million ounces as at year-end 2008. This gives an estimated life of mine of 10 years-plus.

The mine is still ramping up, and was due to reach full production by the end of September. “Estimates indicate that in its first full five years of production, it is expected to contribute 250 000 oz pa at lower cash costs than our current average,” he added. “Total cash cost this year is expected to work out at between US$445 and US$495/oz, compared to US$560/oz last year.”

Barrick – which is traded on the Toronto and New York stock exchanges and has large land positions on some of the most prolific mineral trends – is in a strong financial position. It generated US$2.2 billion (R15.5 billion) of operating cash flow in 2008; had US$1.4 billion (R11 billion) in cash; and a US$1.5 billion (R12 billion) undrawn line of credit as at 31 December 2008.

The company poured 7.7 million ounces in 2008 – nearly 50% more than the next largest gold producer – and ended the year with the largest reserves of 138.5 million ounces – more than 60% higher than its nearest competitor.

BULYANHULU AND NORTH MARA IMPROVE
Turning to Barrick’s other African projects, the Bulyanhulu mine – in north-west Tanzania, about 55 km south of Lake Victoria – produced 200 000 ounces of gold in 2008 at total cash costs of $620/oz. “This year it is heading for a much improved performance, producing between 250 000 and 290 000 ounces of gold at cash costs of US$485 to US$525/oz – an increase in output of between 25% and 45% at significantly lower cost per oz,” said Taylor. 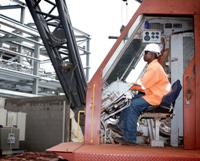 “The rise in output is due mainly to improved grade and improved efficiencies from having a trained workforce. Costs have dropped because consumable prices have come down from the highs in 2008, but the biggest single reason is that cash cost is inversely related to production. Higher output over the same fixed costs results in lower cash cost per ounce,” he explained.

Bulyanhulu had 12 Moz of proven and probable reserves as of 31 December 2008. Life of mine will be dependent on varying production levels – the mine certainly has a long life of well over 10 years ahead.

“The biggest single factor in improved production involved sorting out the security situation, which has allowed the mine to operate uninterrupted on a 24-hour-a-day basis,” he revealed. “Reduction in cash cost is again inversely related to increased production, and grade also plays a role.”

Proven and probable mineral reserves at North Mara as of 31 December 2008 are estimated at 3 Moz.

Finally, the Tulawaka mine – a 70/30 joint venture between Barrick and Northern Mining Exploration Limited, located about 1 000 km from Dar es Salaam – is clearly nearing the end of the road. In 2008, Barrick’s share of production was 148 000 oz of gold at total cash costs of US$212/oz.

“Clearly in terms of the above figures, Tulawaka would be producing its final gold in 2010 in terms of current resources. We are, however, continuing to explore for additional reserves, so no closure date has been announced,” Taylor added. 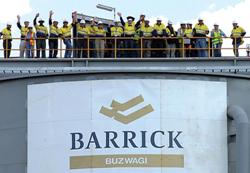 In terms of further exploration, Barrick is spending between US$150 (R1.2 billion) and US$160 million (nearly R1.3 billion) on international exploration this year. Most of it is weighted towards near mine resource additions and reserve conversion, and the majority is being spent in the United States, South America and Australia Pacific.

“Our Africa region – which hosts a total of 18.4 million ounces of proven and probable reserves – also has a mine development budget for near mine exploration, and is busy working mainly towards boosting reserves and life of mine – particularly at Bulyanhulu,” said Taylor.

Barrick is on record as saying that reserves are the cornerstone of its business and – whether by exploration or acquisition, – reserve replacement remains a critical component of sustainable success.

Its vision is to be the world’s best gold company by finding, acquiring, developing and producing quality reserves in a safe, profitable and socially responsible manner. Much of the company’s success is attributed to its practice of consistent investment in exploration and in acquisitions of properties with early stage potential.

It has amassed an extensive portfolio of operating mines and exploration properties in what it believes to be some of the best and most prospective regions in the world. Much of that exploration potential lies near existing infrastructure, where the likelihood of reserve replacement is enhanced and the cost of proving up ounces is reduced.