Base Resources has delivered a financially outstanding performance over the last three years, thanks to an optimisation project implemented at its Kwale operation.

This has seen the mine in Kenya improve its production and recovery deliverables – quite significantly.

Now, the company is looking to build its financial strength further, by investigating the potential to extend Kwale’s mine life and introducing a second producing asset into the stable by 2021, MD Tim Carstens told delegates at the Africa Down Under conference in Perth, Australia in August.

Base Resources’ revenue and EBITDA (earnings before interest, tax, depreciation and amortisation) has climbed steadily over the last three years, which in addition to the company’s optimisation project at Kwale can also be attributed to an improvement in mineral sands prices. 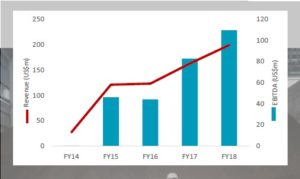 “We have been in Kenya for the last eight years since acquiring Kwale and believe we are a shining example of what can be achieved in the country, representing about 65% of its entire mining industry,” Carstens highlights.

“We have also positioned ourselves as a unique operator within the mineral sands space – operating as a mid-cap, pure play mineral sands company of which there are relatively few in the world, while consistently producing at a higher average price across our three product lines – ilmenite, rutile and zircon,” he continues.

The successful evolution and potential at Kwale

The conversion of Kwale’s mining process from dozer track to hydro mining (part of the company’s $29.8 million optimisation project) over the last 18 months, in combination with upgrading the wet concentrator plant by more than doubling its spiral volume, has seen the operation deliver on its production targets while compensating for depreciating grades as the current Central Dune resource nears depletion.

“We completed the optimisation project on time and within budget and consider this a significant achievement considering it was quite disruptive to the existing operation,” Carstens notes.

Now, as the company works towards transitioning from its Central Dune to the South Dune by the end of the year, it is prepared to continue delivering similar production levels and similar grades.

And while Kwale’s current reserves equates to a lifespan running to 2022, or the middle of 2024 when taking into account extensions at the South Dune, Base Resources is well underway with an exploration programme to increase this further.

“A major drilling programme is in process and is focused on the North Dune and we are working to deliver results from this within the next six months.”

These efforts are testimony to the company’s intention to remain an active miner in Kenya, as it continues to build on its relationship with the government and new mining cabinet secretary John Munyes.

The acquisition of the Madagascar-based Toliara Sands project, completed in January 2018, positions the company for significant growth.

“On the back of our strong financial base the timing was right to bring a second asset into the portfolio – and we consider Toliara to be the best undeveloped mineral sands asset in the world.”

The company will acquire the remaining 15% interest, with a further $17 million payable on achievement of key milestones as the project advances to mine development.

Situated in the south-west corner of the country, Toliara Sands comprises a large, high grade resource containing 857 Mt, of which 612 Mt sits within the measured and indicated categories.

This is sufficient to support a +40-year lifespan at similar production levels to Kwale, although there is also significant potential to expand the resource further.

Consequently, the project is expected to sit within the first quartile revenue-to-cash-cost ratio (in comparison to its peers).

For now, with primary permits are already in place and the land acquisition process is underway.

The primary objective is complete a pre-feasibility study which is being undertaken by Lycopodium and Mineral Technologies and complete an on-site drill programme to further define the resource.

Planning on all front infrastructure is also underway – which considers a 55 km dedicated haul road, a river causeway and a dedicated jetty and bulk product storage at a port situated in close proximity to the town of Toliara.