Riversdale Mining is moving ahead with its massive Benga project which will eventually process 20 million tonnes per annum (mtpa) of run-of-mine coal, and deliver eight mtpa of badly needed coking coal and four Mtpa of thermal coal

In additional to conventional rail transport the project plans to use a unique barging system. The barges will transport the product more than 500 km down the Zambezi River to the natural bay of Chindi on the east coast for export, mainly to China and India.

This is the word from Riversdale’s chief operating officer: Africa, Andries Engelbrecht, who tells Mining Review Africa that the Benga project is 65% held by Riversdale and 35% by Indian mining giant Tata Steel.

“Riversdale is committed to investment in worthwhile operations, and from an investment point of view, and in terms of off-take agreements, there’s an enormous amount of activity, but not much that I can speak to you about,” he adds.

“This activity does not involve South Africa or Mozambique – it’s all the big players in the world market that are involved. There is talk around equity, but the biggest single driver for the would-be investor is off-take. Coking coal is a pretty rare commodity, and if you have a competitive advantage, which we do have in Mozambique, people will stand in queues to try and clinch off-take agreements,” he says.

In April 2009, Riversdale received approval from the government of Mozambique for the Benga coal project mining contract. This contract establishes the particular terms which govern the development and implementation of the project, and covers all aspects of the proposed development including exploration, feasibility, development, operations, fiscal regime, rehabilitation and final mine closure requirements. Environmental approval was granted in January this year.

“We are the largest tenement holder in Mozambique with a combined tenement size of 250,000 hectares, an extensive area capable of supporting long life operations. The Benga project is our initial and key project, and has a mine life of between 30 and 35 years, based on the current knowledge we have of the orebody,” he says.

“The project will be implemented in three phases. Phase one will have a throughput of 5.3 mtpa run of mine, which will yield about two mtpa of coking coal. We are hoping to get the first coal on the ship from phase one in August/ September 2011,” he adds.

“Phase two will ramp up to 10.6 mtpa, yielding some four mtpa of coking coal, and production is scheduled to start in 2013. Work on phase three is due to start in the second half of 2014. The exact date will be dependent on river barging, as well as additional rail/port capacity. It will lift production to 20 mtpa run of mine, delivering some eight mtpa of coking coal from 2016.”

“Riversdale’s capital outlay for the Benga project is estimated at US$$270 million,” he reveals. “This for phase one only, and excludes our portion of the port upgrade, as well as working capital.

“As far as the resource/reserve situation is concerned, data collected from recent drilling activities shows an estimated coal resource of 4.0 billion tonnes, of which just over a billion tonnes is in the measured and indicated category,” Engelbrecht says.

Furthermore, there are positive prospects for near-side exploration leading to greater resources and reserves at Benga, and hence extended life of mine. “Our priority is to establish the mine and then move into the second and third phases, but we have already identified areas which could add quite a few million tonnes to our resource/ reserve levels,” he says.

“Our short-term goals for the initial part of 2010 include rail and port tariff agreements, and the Beira port refurbishment. First priority was the Senna rail project, and that has been completed.

“The next step was to come to agreement with the rail operator (CCFB), which falls under Mozambique Railways (CFM), on rates per tonne, and that is very close to being settled,” he continues.

“As far as overall capacity is concerned, we are working on six mtpa, and we have an agreement with Vale and CFM as to who gets what allocation,” he says.

“Regarding the port of Beira, Riversdale, Vale and CFM have reached agreement on who will pay what portion of the upgrade. We have also reached agreement in principle on dollar per tonne port charges,” he adds. 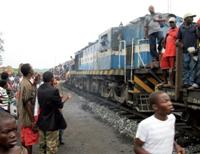 The first train enters
Moatize on the new line

“The designs for the upgrade have been completed and approved, and we understand that construction will start within the next couple of months. They are talking about a 13 to 15-month construction period, which means that it certainly should be complete by mid 2011, which fits in with the schedule I quoted of first Benga coal on the water by August next year,” Engelbrecht says.

“As mentioned, our plan is to go to 10.6 million tonnes by 2013,” Engelbrecht reiterates, “and the siding that we are building will be able us to handle that volume quite easily. Also the Mozambican government is looking at upgrading the Nacala line, but most important is the barging option,” he emphasises.

The barging studies are quite well advanced, and from a technical point of view there really are no issues. The Zambezi River compares very well with some of the bigger rivers in the world.

A barging operation would transport coal 540 km down the Zambezi River from the Benga mine at Tete to Chindi, between Nacala and Beira on the East Coast. Then the coal has to be taken 15 km out to sea and trans-loaded into a 70 or 80,000 tonne trans-shipment facility anchored to the seabed, and ships will come alongside to load up.

“It’s very difficult to set a tonnage that will be transported by barge, but the Zambezi operation could easily meet our demands,” Engelbrecht assures. ‘Bear in mind that there is the rail side as well, and there is Nacala, which is a deep-water port up north with huge potential to be a RBCT-type operation,” he points out.

“We are quite happy that we will easily be able to handle the required tonnages by rail together with the barging method. We have completed the first phase of the environmental impact assessment, and now we are into the nuts and bolts,” Engelbrecht says.

“It is important to note that barging will never replace rail. Our resources are of such a nature and size that both rail and barging will be required for the life of our projects,” Engelbrecht explains.

“We would want the barging initiative operating in 2013 at the latest, to tie in with our Benga phase two ramp-up to 10.6 mtpa. The indication is that the first phase of the barging operation will cost some US$80 million.”

Engelbrecht says that right next to Benga is an operation named the Zambeze project. “This project, which is fully owned by Riversdale, is much larger than Benga. In fact it has the potential to become one of the largest open cast operations in the world,” Engelbrecht says.

In October 2009 Riversdale announced the initial resource statement for Zambeze, and it is estimated to be 1.70 billion tonnes, categorised as JORC indicated resources. ‘The scout drilling to date has proven that a vast area is involved. We still have at least 90% of the Zambeze deposit to explore, and what makes it even more encouraging is the fact that it is a continuation of the Benga seam,” Engelbrecht emphasises.

The barging area, from where
barges will leave Benga for
Chindi

“We have a department in Sydney that is doing a prefeasibility study on Zambeze, and we hope to be in a position to have all the numbers and to be able to make a final decision to mine at Zambeze in the next 12 months. This would mean that first production at Zambeze could be scheduled for July 2014.” Riversdale is also planning to export thermal coal from Benga to feed power plants in Southern Africa and beyond.

“We will be in a position to export thermal coal by the last quarter of 2011,” Engelbrecht says. “We are talking various African countries – these include Tanzania, Zambia, the DRC, Zimbabwe, Uganda, Mozambique and Namibia. Our primary export destinations will be the Chinese and Indian markets.”

Good progress is being made in discussions with some of the main power station construction companies to build a coal-fired power plant adjacent to the Benga mine at Tete, and the Mozambican government has already granted Riversdale environmental approval for the project. The power plant, estimated to cost up to US$1.3 billion, is expected to generate an initial 500 MW, which will be expanded to 2,000 MW in due course.

Riversdale is in advanced talks with a large industrial customer in South Africa, and has also been granted permission to transmit into the national grid up to 225 MW of the power for the moment, with the rest being used to run the mine and to supply Mozambique.

Riversdale is looking at concluding commissioning and construction by late 2013 or early 2014, which would fit in with the company’s planning at Benga.

“It is becoming increasingly recognised that in the next ten years Riversdale will certainly become one of the bigger role players in the hard coking coal market, and more importantly we will be able to do so very competitively, firstly through volumes and secondly through the freight rate advantage in the major markets such as China and India,” he says.

Looking at the future of coking and thermal coal, all the major analysts agree that there will be a shortage in the light of future development in China, and more specifically in India and Brazil in the longer term. “They just do not have the supplies, but we do,” he concludes.