As an early adopter of global environmental standards, diamond giant De Beers Group has long been raising the bar in sustainable mining practices.

For at least the last decade, it has also been leading the way in fostering biological diversity – or biodiversity – on its extensive properties.

According to Dr Patti Wickens, senior environmental manager at De Beers Group, the biodiversity focus is firmly embedded in the company’s commitment to ‘Protecting the Natural World’ – part of its Building Forever promise.

“It is quite unusual for a mining company to have large tracts of land that are designated for conservation, but we consider it vital that we contribute in this way, to we ensure our overall impact on the environment is a positive one,” says Wickens.

For every hectare of land used for mining by De Beers Group, 6 ha are dedicated to the conservation of nature.

De Beers Group owns significant property in South Africa that it dedicates to conservation, including large areas near Kimberley in the Northern Cape and near the Group’s Venetia mine in Limpopo Province.

Together with conservation parks at both the major diamond mines managed by Debswana – the Group’s joint venture with the Botswana government – this amounts to some 200 000 ha that are the subject of specialised attention aimed at preserving and fostering the diversity of plants and animals in the region.

The Group’s commitment to environmental sustainability starts with the systems and processes required to monitor, understand and mitigate impacts.

De Beers Group was one of the first mining companies to embrace the ISO 14001 international standard that specifies requirements for an effective environmental management system.

“De Beers Marine was the first company in the Group to put this ISO system into place and have it certified, back in 1998, and all our sites have for decades been ISO-certified,” Wickens says.

“These strict standards are applied not only on our mining sites but on all our downstream operations as well.”

She highlights the importance of effective mine closure planning, and the process of integrating this with mine planning to enable concurrent rehabilitation.

“Our mission to protect the natural world takes into account all the environmental impacts of diamond mining, and commits us to invest in conservation more broadly,” she says.

“It ties in closely with the promise to consumers of our Forevermark diamond brand, which ensures that the diamonds are responsibly sourced. Our millennial customers are particularly aware of, and concerned about, the environmental footprint of the products they buy.” 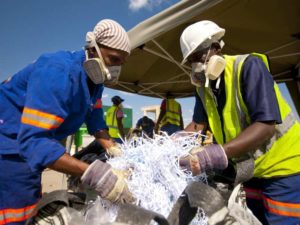 De Beers Group made a commitment almost 10 years ago to have no net loss of significant biodiversity; now, Anglo American – De Beers Group’s major shareholder – has committed to have a net positive impact on biodiversity.

“This means understanding, in detail, the levels of biodiversity in each of the areas in which we operate – and planning the necessary biodiversity actions where new projects are envisaged,” she says.

This involves following the mitigation hierarchy: firstly, avoiding any impact where possible; then steadily minimising the impact through various mitigation strategies. If there is still a negative balance, then there would be a need to offset the impact through work in conservation areas or other initiatives.

“What is key to our sustainable approach to mining is that we internalise all our costs of closure,” she says.

“Incorporating all the externalities also makes good business sense, as we can properly evaluate a project with the whole picture in mind – and a clear assessment of the various business risks.”

Wickens highlights how the focus on biodiversity also presents considerable opportunities for the business to make a broader contribution to the environment. \

When a rare species is identified, for instance, researchers can be mobilised to find out more – and to set in motion a constructive initiative.

De Beers Group collaborates with a range of partners, including universities and conservation NGOs, to conduct research and to host an annual research conference on biodiversity-related issues ranging from birds and mammals to archaeology.

“This popular event provides a valuable opportunity to showcase the conservation research that is being conducted on our properties, as well as any other research that is sponsored by De Beers Group and our partners,” she says.

In terms of ongoing interventions, there is a larger research project underway related to climate change and carbon capture strategies, involving five different universities from Australia and Canada, with a focus on the capacity of ultramafic rock to store carbon.

“The potential is for us to offset a carbon neutral mine within a decade,” she says. “We are exploring the ability of kimberlite tailings to absorb carbon, and what we can do to optimise and scale up this process. We are working with academic institutions to conduct laboratory tests on our tailings material, which will lead to on-mine pilots.”

Another important component of De Beers Group’s conservation research is to build capacity among young conservationists and scientists; the company’s sites are therefore made available for wildlife college students to get experiential learning or for post-graduate students to conduct specific research projects.

With its conservation initiatives focusing on both the environmental challenges of today, and on the scientific insights of tomorrow, De Beers Group is seeking to Build Forever right now.

In July this year The De Beers Group announced it has begun transporting 200 elephants across 1 500 km from its Venetia Limpopo Nature Reserve in South Africa to Mozambique.

The operation, one of the largest elephant translocations ever recorded in South Africa, is part of a major conservation initiative to protect the welfare of wildlife in South Africa and help restore Mozambique’s elephant population.

The first phase of the project saw approximately 60 elephants transported in July and August from the Reserve to Zinave National Park in central Mozambique.

The remaining elephants will be moved to conservation areas that hold sufficient elephant carrying capacity within Mozambique from next year.

De Beers Group is partnering with Peace Parks Foundation, a leading not-for-profit organisation focused on the preservation of large functional cross-border ecosystems, to carry out the initiative.

Peace Parks Foundation will assist De Beers Group with the translocation, ensuring the elephants’ social groups aren’t disturbed and that they flourish in their new habitat through ongoing monitoring of their well-being and enhanced protection efforts.

As part of its investment in the elephant translocation initiative, De Beers Group is also providing Peace Parks Foundation with US$500 000 over five years towards anti-poaching support measures, which will include the hiring and training of new park rangers, and the opening of new access roads to increase patrol coverage.