Site construction at the Bisha gold/copper/zinc project in Eritrea has begun. South Africa’s IDC is the lead banker for the initial US$250 million project, with production intended to begin next year.

The Bisha project in Eritrea is being developed by the Bisha Mining Share Company which is jointly owned by Vancouver based Nevsun Resources (NSU on TSX and NYSE AMEX) and the Eritrean National Mining Corporation (Enamco). Bisha features a layered gold then copper and finally zinc dominant orebody that textbook geology describes but almost never occurs perfectly in the real world.

The top layer of the Bisha orebody is a gold enriched oxide cap extending from surface down to about 35 metres, which will be mined during the first two years. Below this, extending from 35 metres to 65 metres is a copper enriched (supergene) massive sulphide orebody containing gold and silver, which will be mined for the subsequent three years of production. The third layer, extending from 65 metres to 450 metres below surface and open at depth, is a primary massive sulphide orebody containing high grade zinc as well as copper with appreciable gold and silver credits. This third layer of the orebody will be extracted from Bisha’s sixth year of mining life onward. The expansion cost in the two subsequent phases is expected to be US$115 million after the initial mine development cost of US$250 million (estimated in June 2008).

“The textbooks state how a volcanogenic massive sulphide orebody can be covered by silt and compressed, followed by erosion and oxidation. The chemistry is well understood, and it is how it has turned out at Bisha,” Nevsun vice chairman John Clarke says. Clarke was until recently the CEO of Nevsun and is also formerly an executive director of Ashanti Goldfields before its merger with AngloGold.

During the first quarter of 2009 ground preparation was underway at Bisha, which is located some three to four hours drive due west by road from Eritrea’s capital Asmara. Clarke told Mining Review Africa at the recent PDAC in Toronto that the IDC, which was appointed the lead banker for the project and has committed US$89 million to it, is doing so as part of its charter to help enable the export of South African goods and services and assist in developing business sectors elsewhere in Africa.

A great deal of the project’s construction work and supply of services will be done by companies based in South Africa, with Senet having been awarded the EPCM contract in mid 2007. Senet mobilised to site in August last year and has been undertaking site clearing, construction of the long term facilities to accommodate over 400 people, and heavy earth moving. The project’s detailed design work was completed at the end of 2008 and many of the orders have already been placed.

The mills for the Bisha project were ordered in February 2008. As the critical path item, this set the timeline for the rest of the project, which should see construction completed by the end of this year, commissioning taking place in the first quarter of 2010 and production underway in the second quarter of next year.

Clarke says that as the Bisha feasibility numbers were done conservatively in 2006, before the commodities spike, the viability of the project was not affected by the downturn. The 20 million tonnes of Bisha reserves were calculated based on US$400/oz gold, copper at US$1.05/lb and zinc at US$0.5/lb. In fact, as a cut-off grade of 2.0 g/t was used for the gold, a review of the project can increase the oxide gold reserve by including ore previously treated as waste in modelling. This ore could be treated by the mine’s planned CIL plant, or stockpiled for heap leach treatment. 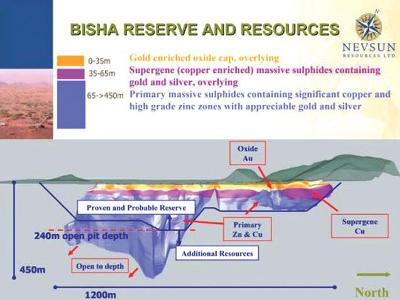 Each of these three layers in its own right is a very good project, but combining the three provides a world class project by almost any definition. The ore processing will require different plants for each of the three phases, but will make use of common infrastructure and milling operations. Taking into account the life of the operation, for the first ten years of its plan the average stripping ratio will be 4:1 to 5:1. The life of mine operating cost is expected to be US$33.3 per tonne of ore milled.

In the feasibility study the mill capacity was retained at two million tonnes a year for the copper phase of the project, which will see its flotation and concentration plant under construction during the second year of the mine life. This phase, which will be funded by the operation’s cash flow, will produce a 30% plus copper concentrate. This phase’s main years of production, three, four and five, will see an average annual production of 267,000 dry tonnes of 30% copper. The recovery rate for the copper is expected to be 92%. The mill capacity in the feasibility study was based on the harder oxide ores. As a result, there will be an inbuilt capability for future expansions as the installed mills should be capable of milling up to three million tonnes of the softer copper supergene ores.

Year six will be a year of transition from the supergene orebody to the primary sulphide zinc containing orebody, with the zinc cells and tanks being built in year five of the project. This third phase, from years six to ten, will produce 75,000 tonnes of 25% copper concentrate a year and just over 220,000 tonnes of 55% zinc concentrate annually at the feasibility study milling rate of two million tonnes per year. As the primary ores are even softer than the oxide and supergene ores, the actual installed mill capacities should reach three and a half million tonnes, again providing for potential future expansions.

The Bisha project has effectively been a decade in evolution as Nevsun entered Eritrea in 1998, and the discovery took place in 2002 as a result of early stage exploration. It was a genuine greenfields discovery; there is no artisanal work on that site as the contained gold particles are too fine.

Nevsun went to Eritrea looking for gold and recognised a gold bearing gossan oxide opportunity at surface at Bisha. It had not expected to find such rich copper and zinc deposits immediately below that. The gold cap does remain the key as it can finance the mine.

Bisha Mining will still drill other parts of the concession and has already successfully drilled targets to the north-west of the main Bisha reserve and to the south-west. Both of these are potentially 10 million tonne targets. Nevsun was formerly mainly associated with West Africa and not Eritrea.

The company sold the last of its West African projects last year to focus its resources on Bisha and to obtain some cash to develop that project. In 2008 Nevsun sold its Mali properties, including its Tabakoto mine and Segala property, to Avion Resources for US$20 million. The company also previously held the Kubi property in Ghana. Nevsun defined resources at Kubi that became an open pit operation mined by AngloGold Ashanti from which Nevsun derived a royalty cash flow. That open pit was mined between 1999 and 2006. In 2007 Nevsun sold the Kubi property to PMI Gold Corporation.

While the Bisha project is clearly blessed in having a great orebody, the company feels it is also very fortunate in its location in Eritrea. Clarke is full of praise for the people of Eritrea that he has worked with. “Eritrea fought very hard for its independence and for the right to exist and the people are very self reliant. They are proud and capable.”

The government of Eritrea is as per its mining law entitled to a free carried interest, but it has also taken a further 30% interest to be purchased at fair value by the Eritrean National Mining Corporation (Enamco). Enamco, which was established in 2006 by the government, paid US$25 million as a down payment on the purchase price for the project whose mining licence was granted at the start of 2008. In 2010, when Bisha makes its first gold shipment the government will pay for its 30% contributing equity purchase at the project’s net present value at the time.

The Bisha project will be supplied by its own diesel or fuel oil generators which will have a capacity about 16 MW. The project is accessible by tar road from the port of Massawa via Asmara for all but the last 50 km after which an all weather road reaches the mine. The quality of the roads reflects the commitment by Eritrea to continued infrastructure development and maintenance. The government has also built an airstrip at Bisha. Ground water is available to supply processing water. “In fact the mine is located between two significant river systems that it can tap into,” Clarke says.

The Bisha mine will be the owner operator of the mining fleet and it is speaking to various supplies regarding what will be a fleet with haul trucks in the 100 tonne capacity range. Bisha represents the start of modern large scale mining in Eritrea, and the project, while fortunate in terms of its geology and a supportive government that is rational in its management of the country’s new mining sector, may also be fortunate in its timing of the cycle. It is a project being built as many other projects stall. Its gold production may coincide with strong gold prices, with its copper and then zinc output to coincide with upturns in demand for those commodities.