Ridge Mining changed its name from Cluff Mining in May 2005, following its decision to focus on its platinum assets. Prior to this Algy Cluff, who headed Cluff Mining, had invited Terence Wilkinson, the former chief operating officer of Lonmin, to join the Cluff Mining board. Wilkinson, who is now CEO of Ridge Mining, introduced Martin Sharpe, co-founder of Sperrylite which owned platinum rights in South Africa, into the partnership. Of the four projects that came out of that agreement, the number has been reduced to two, these being Blue Ridge and Sheba’s Ridge, while a third, Fountain’s Ridge, has since been added.

BLUE RIDGE – FEASIBILITY ALMOST DONE
The more advanced of these projects is Blue Ridge, which is an underground mineable platinum project whose feasibility study is under revision. A great deal of drilling (some 92 boreholes drilled with 155 deflections) had been done in 2003, but the change in the rand environment required an optimisation of the original feasibility work. This has been done over the past 18 months. Blue Ridge has the potential to be a UG2 reef platinum mine from surface to 800 metres underground, at a rand price of R6.50 to the dollar.

Part of the work has been to improve the concentrate offtake agreement, and look at cost efficiencies to make the project viable under a strong rand. The original feasibility study had a mill feed grade for the project of 2.8 g/t and this has now increased to around 3.5 g/t by optimisation of the mine design featuring an ‘efficient cut’ option. That essentially means leaving the top 30 cm of the reef in the hangingwall. The current mineral resource, before optimisation, is 45 million tonnes at a 3PGE + gold grade of 3.1 g/t for 4.5 million contained ounces. The reef is 125 cm wide and the bottom 31 cm has a grade of 4.64 g/t, while the middle section of 67 cm has a grade of 3.12 g/t. The uppermost section of 27 cm has a grade of 1.81 g/t, and together the three have a grade of 3.23 g/t of 4E. The project has the advantage that it is blessed with a stable hangingwall, unlike the majority of UG2 reefs.

Laboratory test work has been undertaken and a four month trial mining exercise was also undertaken, ending in August. This has proven that the hangingwall holds up well as expected, while the footwall shows a clear break ensuring no dilution.

The project has other advantages, in that it can be advanced from the surface with the reef extending to surface, and it has western limb platinum palladium type ratios of 2:1 instead of 1:1 more commonly found on the eastern limb.

The ‘efficient cut’ study has improved the economics of the project, while proposing annual production of 114,000 ounces, compared with the original 136,000 ounces. However, in doing so, by providing an option to simplify the process route, it reduces the capital cost significantly. 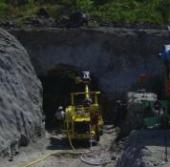 Start of the mechanised decline at
Blue Ridge

“Further Ridge Mining has an experienced team, with a number of key former Lonmin people involved, including its former chief metallurgist, as well as mining and plant managers with years of experience in platinum mining,” Ridge Mining’s commercial director, Francis Johnstone says.

Ridge Mining has been conservative and the project has been tested to the nth degree, including the trial mining and having Mintek undertake bulk sample testing.

The project is in the process of negotiating an empowerment deal with the Imbani Platinum, featuring Briss Mathabathe and Joel Mokgohlwa. Ridge Mining has signed a Memorandum of Understanding with Imbani.

Ridge Mining is also looking to acquire an adjacent piece of ground that belonged to the Southern Era’s Millennium project and now belongs to Lonmin after its takeover of that company.

“While not essential it would be nice to have,” Johnstone says, “as it would add some 10%-20% to the project’s reserves and increase its life accordingly.”

This would also make up for the 15% to 20% of reserves that have to be conceded to make the project robust and viable in the R6.50 or stronger rand environment.

Ridge Mining plans to provide development capital for the project and already has the necessary technical expertise to develop the project itself.

The project would take about 22 months to build after a goahead is given. Completion of the feasibility work on Blue Ridge is scheduled for the end of October 2005, and management will make a decision at the end of this year on going ahead with the project. If the decision is positive, development could begin as early as 2006.

In other words the project represents a large low grade nickel and PGE resource with copper credits. It would be mined as an open pit following an orebody that is 4 km long and 100 metres wide, with a core that has a width of 20 metres. The feasibility work so far envisages a large scale, low cost open pit mine with a life of 18 years. It would treat 18 million tonnes of ore to produce 600,000 tonnes of concentrate a year. The projected annual production would be 23,900 tonnes of nickel, for revenues of about US$250 million, a year. This makes it about half the size of the Ambatovy project in Madagascar. The Sheba’s Ridge pre-feasibility study also projects 12,000 tonnes of copper and 380,000 ounces of PGEs produced a year.

“Considering the scale of the project we would build our own dedicated smelter,” Johnstone says.

This smelter would produce white matte and have the capacity to treat third party concentrates.

Johnstone also says, “We would be looking to bring in a partner for this project, whose capital cost including the smelter would be approximately US$700 million. This project’s size could attract a major global nickel producer.”

Sheba’s Ridge is already a joint venture involving Anglo Platinum as Ridge’s partner, and Ridge can through its options dilute Anglo’s existing 35% share to 12.5%.

FOUNTAIN RIDGE – CONSOLIDATION POTENTIAL
Ridge Mining has a third project, Fountain Ridge, this located on the western limb. Ridge owns 51% of this. A local empowerment company, Mmakau Mining, and communities own the remainder. This 3,238 hectare property, which is down dip and on strike of Anglo Platinum’s 2,650 hectare Elandsfontein property, has a mineral resource down to 600 metres of 98 million tonnes at 4.34 g/t of 4E (13.7 million ounces of contained 4E). The platinumpalladium ratio at the Fountain Ridge property is 3.2:1.

The Blue Ridge project has the
advantage that it is blessed with a
stable hangingwall.

The joint venture’s exploration programme on Fountain Ridge began in June 2004. A high resolution aeromagnetic survey showed the structural integrity of the platinum reefs over the bulk of the property, and aeromagnetics and aerial photography were used to identify drill sites. An 18 hole drilling programme commenced in March 2005.

However, after the rush of land of a few years back and with the Bushveld properties now all held, consolidation is likely to be the next phase. Fountain Ridge definitely makes sense as a consolidation play. “We may look to be part of a larger project,” Johnstone says. “It would be a vertical shaft project if it stood alone and we prefer from a costeffectiveness viewpoint to be able to mine from the surface.”

With what it has, Ridge Mining is not actively looking for new property. Rather, the company, which has spent some US$40 to 50 million to date on its properties on the Bushveld Complex, is looking to establish a production base and cash flow. This would start with Blue Ridge. AIM-listed Ridge Mining is also looking at the possibility of a listing in South Africa, on the main board of the Johannesburg Stock Exchange. MRA

Michelin sets out the challenges of 100% sustainable tires