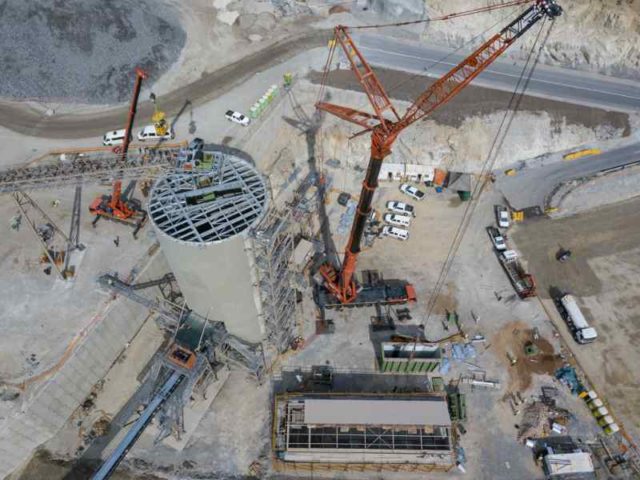 A visit to Northam Platinum’s Booysendal operation reveals an already large-scale operation which is well underway with a massive R5.6 billion expansion programme.

The scope of work required to deliver on this project is extensive and incorporates the construction of a new UG2 module together with additional new Merensky module, supporting infrastructure and most impressively, the delivery of a unique materials handling system never before seen in the South African mining sector.

Having visited the site in June 2018, LAURA CORNISH returned in December to see the significant progress that has been made and to learn about the exciting new developments that are now on the horizon.

Overseeing the delivery of the entire Booysendal expansion is international engineering firm DRA Global, which under the guidance of project manager Eddie Badenhorst and Northam Booysendal general manager Willie Theron, is working hard to ensure the project remains on time and on budget.

The significant progress made in the space of six months (between June and December 2018) indicates that the determination and focus on achieving this is unquestionable and achievable.

“Our monthly progress continues as planned and I am confident that the entire Booysendal mine will be operating at a steady 470 000 ozpa by FY2022/23 – with upside to get to 500 000 ozpa when the combination of all our mining modules are operational,” Theron notes.

For those few who may be unfamiliar with the details of the Booysendal expansion, in summary, it incorporates the introduction of a new mining complex referred to as the Booysendal South project.

(The original operating footprint includes a North UG2 mine which has also subsequently been expanded at depth, together with an adjacent North Merensky mine, established in 2016).

Situated just 4 km south of the North mine (as the crow flies), the Booysendal South project includes:

The South RopeCon – a thing of beauty and financial smarts

All Booysendal South ore will be processed at the South concentrator which Northam Platinum acquired from Aquarius Platinum in 2015.

The UG2 and Merensky mines are located about 5 km from the plant (as the crow flies) and required an innovative approach to deliver a cost effective transportation system between the two points.

The RopeCon system was elected as the best solution for Booysendal South’s material transfer needs.

It comprises a series of towers, strategically positioned between the mine and plant, connected by ropes and conveyor belt which will run the entire distance above ground.

“Not only is the system extremely cost effective when comparing it to traditional truck transportation, it equally minimises our impact on the environment – an essential aspect of the project considering the operation lies amidst valleys and beautiful natural vegetation,” Theron notes.

“From the loading station situated near the Everest plant, the conveyor belt will travel across 12 towers which can accommodate a maximum 1 150 tph tonnage rate.

The tallest tower stretches 59 m in height and the longest span between two towers is a substantial 878 m.

“The RopeCon system is a unique system and a first of its kind in southern Africa, currently noted as the longest RopeCon in the world,” Badenhorst notes.

“It has a small footprint, is 10 times more cost effective than a conventional system that has to deliver the same tonnage requirements and overcomes our mountainous typography challenges,” Theron highlights

A 4 200 t silo, 36 m in height and already built, will feed the loading station at the mine and discharge the material at the process plant drive station.

120 000 t of material was stockpiled in preparation for the commissioning run – which required a 24 hour continuous run of the RopeCon without interruption.

This stockpile forms part of a much larger 500 000 t UG2 stockpile which will be used to slowly feed the South concentrator as it ramps back up to its 250 000 tpm designed processing capacity.

“This is scheduled to start early in 2020 following full re-commissioning in H1, 2019,” Badenhorst confirms.

Having already intersected reef in June, together with the BS1 and BS2 4 barrel decline cluster split established, Badenhorst outlines the work that has been achieved over the last six month period.

“The drive station at the South mine has now been completed and we are preparing to execute the next step which entails upgrading the remaining upfront conveyors from the ROM silo to the transfer point – which must be completed by February 2019.”

The loading station is also complete and the feed conveyor to the RopeCon silo was due to be commissioned by December 2018 in order to feed the RopeCon in this period and into January 2019.

The remainder of the conveyors, from underground to the crusher, will then be ready to feed ore by February 2019.

Construction of the BCM 1 boxcut is tracking for completion in June 2019 and will contribute a further 60 000 tpm of ROM production.

“It will move into production in 2021 only as it requires its own materials handling transfer system which we will deliver through a new project phase – development of a North RopeCon which will stretch 2.7 km in distance and comprise seven towers connecting the Merensky mine to the South complex crusher which will feed that material into the silo and onto the South RopeCon.”

For now, construction of the North RopeCon is scheduled to start in January, immediately after receiving the necessary environmental permits.

“Although significantly smaller in size – with a design capacity of 400 tph – it should take about two years to complete – primarily because of the more challenging typography which undulates extensively across the distance.”

The installation of a second RopeCon is testimony that both DRA and Northam Booysendal believe it represents significant value in terms of their transportation requirements and is a showcase of the impressive technology that it presents – through sub-contractor and Germany-based transportation specialist Doppelmayr.

“This project will represent one of the most significant developments achieved in the PGM sector in decades and although not yet complete already demonstrates many milestone achievements and industry firsts. It constitutes a flagship project for DRA, one that we have been involved with since its establishment and our very first involvement in the delivery of the North concentrator plant back in 2010.

“We are proud to be associated with Northam Booysendal and to contribute to its phenomenal success in the mid-term future as it reaches it 500 000 ozpa production goal within the next five years,” Badenhorst concludes.