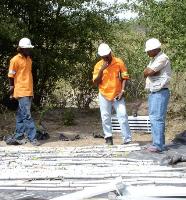 Discovery Minerals, which is developing the Boseto copper project in north-western Botswana, has upgraded the capacity for the project from two million tonnes per annum (mtpa) to three million mtpa. This is due to recently defined additional open cut resources and underground mining at the Zeta prospect at Boseto now included in the overall project scope.

The company has also awarded the fixed price engineering procurement and construction (EPC) contract for the concentrator and associated infrastructure to Sedgman at maximum price of about US$85M for the 3.0 mtpa concentrator.

The delivery of the project’s bankable feasibility study has been revised to July 2010, but Discovery says that the overall project schedule will be maintained with first production targeted for December 2011.

In developing an optimum open cut mining schedule, through work carried out during the latter stages of the bankable feasibility study, the company also considered the potential for underground mining in conjunction with open cut mining. Evaluation of possible underground mining has progressed rapidly in recent months following announcement of a positive underground scoping study based on limited underground resources at Zeta. This was followed by the establishment of a much larger potential underground resource at Zeta with significant mineralisation continuing to at least 650 m depth below surface.

This has led Discovery to conclude that underground mining should be a key element in its decision to appropriately size, from the outset, the overall project processing capacity, rather than having Boseto as an open cut only project. The first production from the underground mine could commence in early 2014.

The total JORC mineral resource for the Boseto copper project at a cut off of 0.6% copper is currently 102.8 million tonnes at 1.4% copper and 17.3 g/t of silver containing 1.4 million tonnes of copper and 57 million ounces of silver.