Toronto based exploration company Volta Resources, which is focused on West Africa, with properties in Burkina Faso, Mali and Ghana, is fast tracking its flagship Kiaka gold project in Burkina Faso toward a development decision. Volta carried out a 22,000 metre drilling campaign on this project to produce a maiden NI 43-101 resource statement by the end of June 2010.

Recent drilling has confirmed wide gold mineralisation at Kiaka, including higher grade intercepts. The company acquired this advanced gold exploration project from Randgold Resources last year, and this year Volta’s target is to commence a pre-feasibility study for Kiaka. The sale of the project by Randgold to Volta has also resulted in the former investing in Volta, with Randgold holding just short of a 20% stake in the explorer.

Overall Volta Resources is exploring 11 projects, comprising 24 individual properties covering 3,940 km2. The projects are generally located on the margins of mature to emerging gold belts, and the focus in 2010 is predominantly on the properties in Burkina Faso.

In addition to the Kiaka project, a drilling campaign was underway on the Gaoua copper-gold project, in the south of the country. In 2009, Volta announced a maiden NI 43-101 inferred resource at Gaoua of 725 million pounds of copper and just over a million ounces of gold. Volta has continued to outline new geophysical, geochemical and structural targets that indicate upside potential within this 692 km2 property.

Drilling campaigns are also scheduled for the Kampti gold project, the Nassara gold prospect and the Titao gold project, all within Burkina Faso.

In 2009 Volta made a new gold discovery at the Nassara gold prospect located in the south-western corner of the Danyoro permit, part of the Gaoua group of concessions. The discovery included a trench intersection of 20.5 metres at 3.56 g/t gold. The prospect was initially identified during soil geochemical surveys, where extensive gold in-soil anomalism over more than four kilometres was found to be coincident with a distinctive northwest striking airborne magnetic lineament. 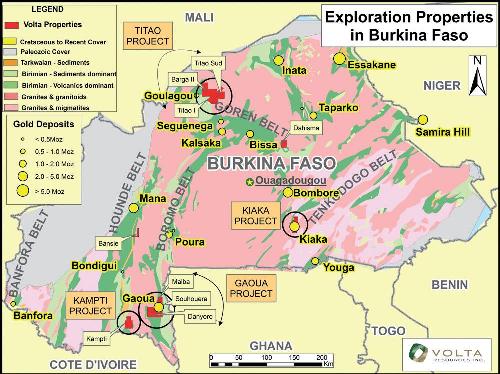 Location of Volta’s projects in Burkina Faso in context of other projects in that country.

The Titao gold project area occurs within an individual segment of the north-north-east trending Hounde greenstone belt. The properties on this tenement host numerous gold occurrences, many of which have been worked by artisanal miners. This year Volta is carrying out a geochemical auger drilling campaign on this project.

In Ghana, Volta suspended work on the Bui gold project pending resolution of an impasse created when the Ghanaian environmental protection agency declined to renew the required environmental permits for exploration. This is because the agency deems that any potential mining might have an impact on the structural integrity of the Bui dam being constructed more than 25 kilometres from the closest Bui properties.

Volta Resources came into existence as the result of a merger of Birim Goldfields and Goldcrest Resources.