Blackthorn Resources will be the first company producing zinc in Burkina Faso next year when its Perkoa mine is due to come on stream, and it is in the early stages of exploring an exciting gold prospect in the same area.

Burkina Faso has a small but growing mining industry. There are five conventionally mined gold mines in operation, and no other mines of any kind in production as yet. The government is supportive and is encouraging mining development and direct foreign investment. “We have a very positive working relationship with the government, and find their internal departments to be readily accessible and helpful, and with a high standard of administration and integrity,” Blackthorn managing director Scott Lowe says.

The Perkoa zinc mine is located in the Sanguie province of Burkina Faso, 120 km west of the capital, Ouagadougou. The project is 35 km by road from the country’s third largest town, Koudougou, which is linked to neighbouring states of Cote D’Ivoire, Ghana and Togo by tarred roads, and by rail to Abidjan, the capital of Cote D’Ivoire. 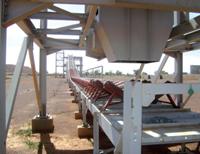 Construction of the conveyor
system at Perkoa

“When Perkoa was placed on hold in mid-2008, we implemented a rigorous care and maintenance programme to make sure that all the plant and equipment were kept in good working order,” Lowe tells Mining Review Africa.

“Meanwhile the government has done an excellent job. The road accessing the mine site is in good shape, and it has assisted with construction and upgrading of the Seboen dam, which will be an important source of water for our project.

“The mining lease at Perkoa is 6.24 km2, but it is surrounded by approximately 595 km2 of leases for which we hold exploration rights. The orebody has a JORC compliant ore reserve of 6.3 million tonnes at 13.9% zinc containing 873,400 tonnes of zinc concentrate,” he adds.

The zinc concentrate thickeners
being built at Perkoa

“As far as production and life of mine are concerned, we will produce 720,000 tonnes a year run-of-mine for about 9.5 years, and we will convert that into an annual 170,000 dry tonnes of saleable zinc concentrate with 53% zinc content,” Lowe estimates.

A total of US$80 million has been spent on the Perkoa project to date. “A further US$72 million, a figure validated by independent mining consultants SRK in late 2009, will be required to complete it,” Lowe says.

The current business case for completing development at Perkoa is the planned joint venture with Glencore International AG, one of the world’s largest suppliers of a wide range of commodities and raw materials.

“We signed the heads of agreement in January this year, and we had initially planned to have the deal signed off and ready for shareholder voting by the end of March,” says Lowe, “but it has taken longer than we expected. Glencore has been doing a very thorough due diligence which is welcome, and we have made considerable progress. The due diligence is nearing completion and we have drafted most, but not quite all, of the joint venture documents that are necessary to put it in place for the shareholders to vote on,” he adds.

“The proposed joint venture is not only the right financial solution, but the right technical and commercial solution as well,” Lowe declares.

He goes on to say that as soon as the deal is done it will take about one to two months to remobilise the construction crews and get back to full construction rate. “We will then expect to commission and start production within a year. There is a distinct possibility that we will be commissioning before the latter half of 2011,” Lowe says. “We have allowed a number of months to ramp up to the 60,000 tonne per month target.”

The production cost as validated by SRK is US$1,500 per payable metal tonne. That includes treatment charges, the 15% allowance for smelter losses, ocean freight, and land transport.

Lowe says, “While there are those who are pessimistic, the list of analysts and economists who predict a strengthening of the zinc price is growing. Barclays, for example, is predicting that the price will increase to US$3,000/t in 2011 and US$3,500/t in 2012. And Credit Suisse and Royal Bank of Scotland joined the growing list of analysts who are more optimistic about where zinc is headed,” he points out.

He adds that in many cases optimism for the zinc price is driven by a reduction in supply. “The fact that very large mines like Brunswick and Century are due to close in the next few years will bring global supply under pressure,” Lowe says.

Another positive aspect of the joint venture with Glencore is that no off-take contracts have to be pursued and secured. “In terms of our agreement, Glencore will take all available concentrates that are not committed to other parties,” he explains. 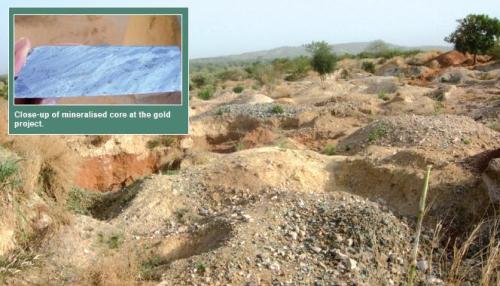 Lowe says the current deposit is open at depth, and Blackthorn believes it could extend the life of mine. “Also, this is a VMS deposit, and these deposits are known throughout the world for having satellite deposits. We haven’t discovered one yet, but there’s always a possibility that this could happen,” he suggests. “Added to that, we have more than 500 km2 of exploration area surrounding Perkoa in which we can and will conduct nearside and regional exploration.

“We are also exploring for gold on that ground right now. We know gold is there. Artisanal workers have mined there for many years, and we have done basic preliminary exploration – soil geo-chemistry, geo-physics, trenching, RAB and RC drilling, and recently we moved into diamond core drilling. We recently announced the results of the first hole, and it delivered an assay result of 2.0 g/t over 14 m, and that includes 1.0 metre at just under 18 g/t,” he confirms.

“Clearly that first diamond core hole has some very encouraging gold grades, and if we continue to identify gold across the property with similar grades, that certainly puts us in a good position for estimating a JORC compliant resource,” Lowe reasons.

“The beauty of this project is that we are very conveniently located within a few kilometres of our zinc mine. If we discover enough gold to make it commercial, then we’ll have a head’s start because we are already on the ground with services.

“These are grounds for being positive and optimistic about our exploration prospects. We haven’t shown there’s a fire yet, but there’s plenty of smoke in the air,” he concludes.