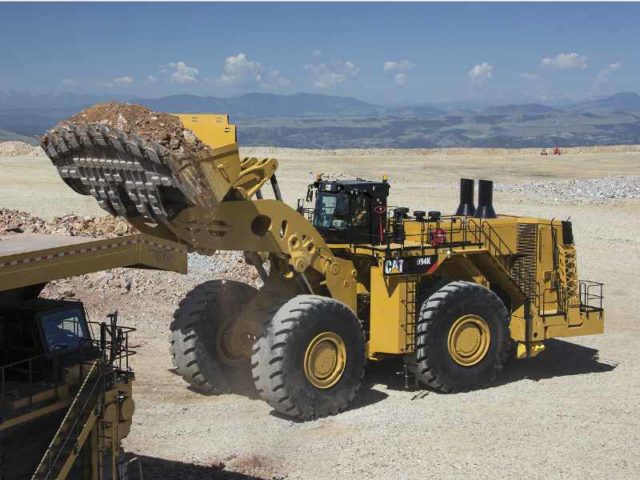 The new Cat 994K wheel loader fills a vital space in the Cat mining load and haul fleet line-up, delivering a 29% increase in payload over its forerunner, the respected 994H.

“Our customers have spoken and now we can offer them Caterpillar’s largest wheel loader, which can be equipped with a high lift linkage that matches it with mining trucks as big as the Cat 794AC,” says Stefan Coetzee, mining product manager at Barloworld Equipment Southern Africa.

Since Caterpillar’s first wheel loader rolled off the line at its facility in Aurora, Illinois, in 1963, Cat wheel loaders have grown into market leaders. Introduced in 1990, the Cat 994 has been the top customer choice in its size class for more than 25 years.

The new 994K builds on this proud tradition, providing Barloworld Equipment mining customers with a machine that is efficiently pass-matched to the 785, 789,793 and 794 mining trucks to provide full payloads in minimum loading times.

“We have sold our first unit to Mota Engil and this machine will be commissioned at a mine in Mozambique in September 2018,” says Coetzee.

“As well as a higher payload, the new Cat 994K wheel loader offers better productivity and lower cost per tonne with the same built-in durability and second life capability as its predecessors. It is the answer to calls from miners across southern Africa for a bigger Cat loader.”

In real world testing by customers, operators commented that loads times were significantly reduced due to torque and digging power, and this after only a few hours’ operation.

“The end result is that we’ve made a loader that is a good digger. Not all wheel loaders are good diggers, but this one is,” says Randy Aneloski, marketing specialist for large wheel loaders at Caterpillar, at the global unveiling of the Cat 994K.

The 994K also offers options to expand its application range and versatility. The new high ambient package is available to equip the loader for operation in temperatures as high as 50°C, and the standard cooling package offers improved cooling compared to the previous model. An optional fuel tank holds enough fuel to operate the loader for 24 hours without refuelling.

Safety is also enhanced by the 994K’s ground-level service centre. The increased size of the machine has improved all round serviceability, with unprecedented access inside the machine to replace pumps or valves.

The 994K is designed to reduce service time. Engine oil change intervals are 500 hours minimum, and all routine service points are conveniently located on the left side of the loader.

The 994K design is aligned with Cat MineStar System capabilities. The Detect object detection system and proximity awareness system are easily installed on the loader.

The Cat 3516E engine produces net power of 1 297 kW (1 739 hp) and is proven in previous 994 loaders as well as large mining trucks. The engine works through a Cat planetary powershift transmission specifically designed for mining applications.

An integral Impeller Clutch Torque Converter and Rimpull Control System allow the operator to precisely adjust power at the wheels to specific loading conditions by modulating rimpull from 100 to 25%, reducing potential for tyre slippage without diminishing hydraulic capacity.

The 994K systems work together to save fuel through advanced technologies. Utilising On Demand Throttle, operators maintain normal operation with the left pedal and implements while the 994K manages the engine speed.

“Improvements in the Cat 994K were developed as a direct response to ‘voice of customer’ research and the new model has undergone extensive field testing,” says Stefan Coetzee. “It comes to us highly recommended by mine owners and contract miners around the world and we expect this machine to take the productivity of our southern African mining customers to new levels.”