Addis Ababa, Ethiopia — 29 June 2012 – Ethiopia has signed two deals worth US$3.2 billion with Chinese and Turkish companies to construct a railway to link the land-locked Horn of Africa nation to Djibouti’s Tadjourah port in order to export potash.

Reuters reports that Ethiopia, which has seen high economic growth over the past five years, hopes to exploit growing business ties with China, India and Turkey to boost its expanding economy. Under a five-year development plan launched in 2010, the government aims to pursue power projects and boost infrastructure, including building several new railways.

Ethiopian Railways Corporation (ERC) head Getachew Betru said Turkish firm Yapi Merkezi will build a US$1.7 billion railway line in the northeast – part of a project that stretches to Djibouti’s third port of Tadjourah, which is under construction.

Tadjourah, on the Red Sea, is the closest outlet for Ethiopia’s Afar region, where a number of foreign firms, including Canada’s Allana Potash Corp, are developing potash mines. Allana said in February it would work with Djibouti authorities to integrate required potash storage and handling facilities into the new port plans.

The new deal follows a US$1.5 billion agreement signed last weekend between ERC and China Communications Construction Company to build a different section of the railway line to Tadjourah port.

Yapi Merkazi is expected to complete its portion of the line in 42 months, the foreign ministry said on its website.

This will link up with the section being built by the Chinese firm, as well as other portions, to give Ethiopia an alternative port access from the current route to Djibouti’s main outlet, providing an outlet for potash development,

Ethiopia aims to construct 5,000km of railway lines by 2020 and says companies from BRIC nations have shown an interest in several projects. 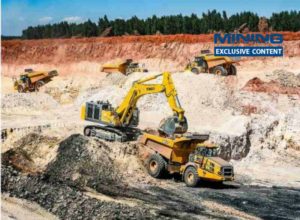