Hong Kong, China — 03 September 2012 – The rail-building unit of China Communications Construction Company (1800) plans to focus more on building rail lines in Africa after failing to profit from US$28 billion of projects in its
home market.

Bloomberg News reports that company chairman Zhou Jichang said in an interview here that it would only bid for domestic rail projects that it could make money on, instead of placing low offers to win market share. The Beijing-based builder, China’s second-biggest by market value, has traditionally focused on ports and roads.

“Our expansion into the domestic rail business was a bit blind,” Zhou said. “We aimed at market share over profitability, but now we’ve learned our lesson.”

The company has already won about US$6 billion of rail contracts this year in Ethiopia, Tanzania and Kenya through its overseas push, and talks about a line for mines in the region are under way, Zhou added. The builder is also considering investments in mining companies and acquisitions in Europe to reduce its reliance on China’s slowing construction market.

“We have to be well prepared,” Zhou said. “It would be too late to seek a new source of revenue if the market started shrinking.” He declined to elaborate further on the potential deals.

The builder, which also operates China’s largest fleet of dredgers, has reported a 14% drop in first-half earnings because of the domestic slowdown. China Railway Group Limited (390) and China Railway Construction Corporation, the nation’s two biggest rail builders, have both reported lower profits.

China’s fixed asset investment in transportation, storage and postal facilities dropped 2% in the first half from a year earlier, according to the nation’s statistics bureau. 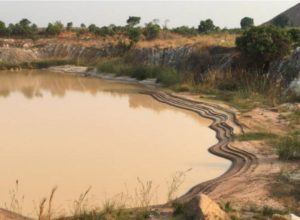