Despite challenging international chrome market conditions over the past year London based and AIM listed chrome production company Chromex Mining is doubling its South African production and launching a new operation in Zimbabwe.

Confirming this in an interview with Mining Review Africa deputy editor Lionel Williams, Chromex CEO Russell Lamming explains that the company has two projects in the Bushveld Complex in South Africa. These are the Stellite project on the Western Limb, and the Mecklenburg property on the Eastern Limb. “The two projects have combined resources of approximately 41million tonnes of chromite,” he says.

“With market conditions beginning to improve, and a solid orebody containing circa 31.9 million tonnes of chromite, we felt that the time was right to recommence and expand our mining operations by channelling our focus into building a cost-efficient, producing chrome mine at Stellite,” Lamming says. “We initially started production in July 2008 and commissioned our spirals plant in June 2009, but mining operations were suspended for the most part of 2009.”

Now Chromex has secured US$5 million funding for a dense media separation (DMS) circuit and ancillary plant improvements at Stellite. “We expect the DMS circuit to be completed in the fourth quarter of this year, and from 2011 it will double chrome processing capacity from 20,000 to 40,000 tonnes per month (tpm) of run-of-mine ore, and improve recovery margins and economic efficiencies at the plant.”

The funding has been secured in the form of a prepayment from Suzhou Kaiyuan Chemical Company Limited, a Chinese steel manufacturing company. “After the initial six month construction period, all lumpy chrome product will be sold to Suzhou for two years. During this period a percentage of each lumpy chrome consignment will be used to offset the pre-payment,” he adds. “Pricing will be market driven and negotiated on a monthly basis.”

The construction of the DMS circuit has already started with cold commissioning planned for October 2010. Other capital projects, which include the construction of a tailings thickener and spirals upgrade, are also underway. “The thickener will significantly reduce the Stellite processing plant’s make-up water requirements, and the spirals upgrade, which includes two additional scavenger spiral banks, is also being installed to optimise chrome recoveries,” Lamming explains. 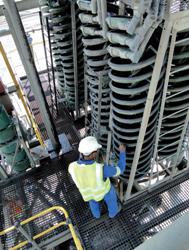 Turning to the Mecklenburg property, which has a 9.6 million tonne underground resource and 5.7 million tonne reserve, the project has been on hold while regulatory issues between Samancor and the Department of Mineral Resources relating to the project are being sorted out. “We have decided to proceed with this project and update the feasibility study. I have attempted to resolve the whole ownership issue without having to go through the courts, but based on expert legal advice we are 100% confident in our rights and we will now start developing the Mecklenburg mine in accordance with the new order mining right granted in mid-2008,” Lamming emphasises.

The bankable feasibility study for the project was completed in 2007 and will have to be updated. “The update will include a substantial proportion of the earlier study, plus adjusted capex and opex numbers, as well as latest developments in actual mining methods,” he says.

“Chromex intends to mine this resource over 10 years with a target production rate of 60,000 tpm of underground run of mine ore. It’s a very high grade resource which lends itself to a nice wide mining cut, and we are looking forward to getting stuck into it. It’s a great resource which has been proven up, the metallurgical test work is very positive and, we should produce very good chrome out of there.”

Looking ahead, Chromex continues the search for opportunities in South Africa but has nothing formalised at this stage. “We’ve always said that we need to grow our resource base, and we are now focusing on nearterm production through mergers and acquisitions. We are very focused on that objective, in fact new appointee Graham Stacey’s role is new business in Southern Africa,” Lamming explains.

The Chromex drive into Zimbabwe involves two acquisitions. “In the more advanced of the two, in April this year we concluded the acquisition of Waylox Mining – a wholly owned subsidiary of TransAfrika Resources Limited – for a total consideration of US$1.15 million. Waylox has a 683 ha land position in the prospective Darwandale area of Zimbabwe,” Lamming says.

“Because it’s an alluvial resource we are able to get a mine up and running a lot faster, as we are looking at taking the top metre off the soil horizon and running that through a spirals plant. From a mining perspective it’s a fairly simple operation,” Lamming points out. 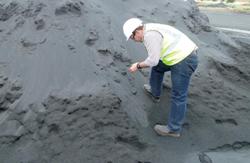 Production out of Zimbabwe will be relatively small to begin with. “It’s more to do with the nature of resource, because it involves low recoveries which results in large volumes of feed material.

We are initially looking at a couple of thousand tonnes a month, but the key thing is that we will be producing a 48% to 50% chrome concentrate, which is very high relative to our South African operations, which are 42% to 44% concentrate. “We would like to start actual development in the fourth quarter of this year, and to begin production by the second quarter of next year. That remains our focus at the moment,” he reveals.

“As far as cost is concerned, capex is low compared to our South African projects. It really is too early for me to give you an accurate figure at this early stage before our feasibility is complete, but I would put the initial capex to start up at roughly US$1 million,” Lamming estimates.

“We are in the process of converting the resource from an unclassified status to SAMREC-compliant, but based on current modelling the latest estimate is 1.9 million tonnes at a grade of just under 14%.

“Our other potential Zimbabwean acquisition involves obtaining 49% of Falvect Mining (Private) Limited – a company owned and operating in Zimbabwe – but we haven’t concluded that yet,” Lamming says.

“Negotiation on this project is still ongoing, and we are discussing the investment with the principal to sort out a few matters – there’s nothing major that’s delaying it. We just haven’t focused on it enough,” he explains.

“As far as the time frame is concerned, I would like to get it settled within the next couple of months. I hope to have it tied up before the end of the year. Now that we have a permanent representative and proper presence in Zimbabwe, it should make things much easier,” Lamming suggests.

“Looking ahead in general terms, chrome is a relatively volatile commodity. We have seen some consistent recoveries over the past six months, and despite some smaller downturns, we see margins improving towards the end of the year through better pricing, and we are comfortable with where the market is going,” he predicts.

Rehabilitation underway at mined
our areas of Stellite.

“But what we are getting even more comfortable with is our operational capacity. We are increasing margins through improved yields, better productivity and we have procured a very experienced management team. We don’t have the ability to control the macro issues such as chrome price or Rand strength but we can control things at the operations level – that is our focus,” he insists.

As far as exploring possibilities further afield in Southern Africa is concerned, Lamming points out that 74% of the world’s chrome resources are hosted in South Africa and Zimbabwe. “And we have our hands full at the moment in these two countries, which we know well,” he adds.

“Nevertheless, if something comes our way, we will certainly have a good look at it. I do have discussions from time to time with other parties, but to be honest we are not actively looking at other jurisdictions at the moment.

“With chrome production set to double at our South African operation, our acquisitions in Zimbabwe, a strong cash flow and a strengthening of our team following the recent appointment of two chrome specialists, we are well placed to take advantage of the increasing demand for chrome,” Lamming says.

“We are in this business for the long term,” he insists. “We see ourselves as a profitable chrome producer and we have a business model that is underpinned by a robust stainless steel market going forward in China. We need to try and match our production profile to the growth in that area.”