Republic of the Congo – Cominco Resources has completed the definitive feasibility study (DFS) for its Hinda project which it says contains the world’s largest and thickest undeveloped phosphate ore reserves.

The privately owned company is moving ahead with the Republic of Congo-based project’s development adding that the DFS indicates it has capacity to repay its US$601 million development cost within 26 months. 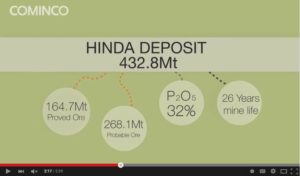 The DFS further demonstrates that the Hinda project is technically and commercially robust and has the capacity which should generate an after-tax, ungeared 38% IRR and NPV10% of US$1.85 billion.

The project is located in the coastal province of Kouilou and is favorably situated 37 km from the port city of Pointe-Noire, the capital of Republic of Congo. Pointe-Noire is a major deep-water container port on the Atlantic coast of central Africa.

Colin Ikin, Chairman of Cominco Resources says, “The Republic of Congo is a stable and safe place to work and invest, with a developed commercial sector, following the long-term success of the country’s oil and gas industry. Pointe-Noire is one of the most attractive coastal cities in Africa I have ever seen.”

The project’s development more specifically entails an open cut mining operation, including in-pit crushing of an average 20 Mtpa of ore. The deposit has a low overburden to ore ratio and can be open pit mined, by free-digging, with no requirement for ripping or blasting. The ore will be delivered to a beneficiation plant that will upgrade the apatite to produce 4.1 Mtpa of saleable phosphate rock concentrate (phosrock) grading 32% potassium phosphate (P2O5).

A slurry pipeline will transport this product 42 km to the export facility at Pointe Indienne immediately north of Pointe-Noire. Product dewatering, drying, storage and ship loading facilities will be built at Pointe Indienne. The project includes all of the infrastructure required to support development including power and gas transmission, accommodation and other buildings, access roads and mobile equipment.

Anglogold Ashanti sells US mine for $820M to cut debt