The underlying import drivers for India are of such strength that India will become the largest seaborne thermal coal market in the world in 2015.

This is according to commodities pricing expert and forecast company CRU Group’s managing consultant Alex Tonks who says that electricity shortages in India are one of the biggest constraints on the country, and electrification is a key objective of the new Modi government. 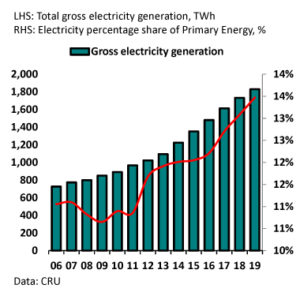 The aggressive targets that the government has set in this area mean that Indian electricity generation is expected to grow at one of the strongest rates of any country in the world – indeed, analysis in CRU’s latest Thermal Coal Market Outlook shows a staggering growth rate for electricity production of 46.8% between 2014 and 2019.

Demand growth potential in India remains huge due to a combination of a growing population, wealth and electricity share within primary energy, as well as unmet demand. The majority of this growth will come from coal-fired plants, which will contribute around 80% of all new generation, despite delays in the construction of the Ultra Mega Power Plant projects.

CRU assesses that coal will continue to play a dominant role in India’s energy mix, despite the nuclear, hydro and renewable pushes taking place. This is because of coal’s ability to keep up with the surging demand needs of the country which has seen it gain market share to date, and will see it hold on to that share moving forwards.

On the domestic front, a number of years of less-than-spectacular production growth has failed to keep up with power consumption growth, and, in turn, this has caused a significant increase in and reliance on imported thermal coal.

While the Modi government has stepped up plans to increase domestic coal production and power generation – the reallocation of domestic coal blocks, interaction with labour unions and the approval of forest clearances are all signs the government is willing to push ahead with domestic output growth.

CRU maintains the view that, unless there are seismic changes in Indian policy and red and green tape, we are not as optimistic as the government’s domestic coal production targets. In conjunction with research conducted by CRU’s Mumbai office, we estimate Indian domestic coal output to be 599 Mt in 2015, with a CAGR of 4.8% between 2013 and 2019.

Illegal strike at Husab mine end, no resolution reached