“About 65% of our 2006 exploration budget will be spent in southern and central Africa,” McKechnie says.

Angola tops that list, accounting for just over 20% of De Beers’ 2006 budget. De Beers re-entered Angola during about the middle of 2005, after an absence of three to four years. It now has a joint venture there with Endiama. This joint venture has 3,000 km2 of concession areas in the Lucapa area in the north-eastern part of Angola where De Beers has already done magnetic and geophysical work that has identified some 60 kimberlitic targets for follow up exploration. It also plans to work on identifying new targets. De Beers is bringing in its own drilling rigs that it is purchasing for this work, and overall it will have about five drills in Angola. It expects to begin drilling in the first quarter of 2006. The main focus is a search for long life primary deposits, but McKechnie does not eliminate alluvial deposits if they prove to be suitable for a De Beers mining project.

The Democratic Republic of Congo is also an extremely high priority for De Beers, and it is exploring some 40,000 km2 of territory in joint venture with a dozen or so unlisted junior companies. The company started its activities in the DRC towards the end of 2004 and it has established an office in Kinshasa. This is still early stage exploration and the company is looking for new targets. It is also looking at the options of a joint venture with state-owned diamond company Miba. De Beers’ exploration in the DRC will account for some 16% of its exploration budget for the coming year.

“We have worked in the DRC before so know our way around, and hope to get into areas where we have not worked before as well as some places that we have worked in previously,” McKechnie says, “but we plan to use new technologies to see if these can garner opportunities.”

De Beers’ Zeppelin airship will be
used for diamond exploration in
Botswana for the next two years.

The other high priority country in Africa in the upcoming year for De Beers is Botswana, where it will also spend some US$20 million in 2006. The company is spending US$8 million in 2005 on theAK6 kimberlite pipe evaluation programme, which forms part of its joint venture with African Diamonds. The AK6 pipe is an estimated 10 hectares with an average grade of 25 carats per 100 tonnes and an estimated value of US$138/ct. With that project to pass beyond the exploration stage into the prefeasibility stage De Beers’ Botswana exploration focus will be freed up in 2006 for other activities. De Beers also has joint ventures with Firestone Diamonds in Botswana.

De Beers also plans to use new airborne geophysical technology in Botswana which McKechnie says will provide De Beers with the most sensitive and effective system of its type in the world. This new method will increase the clarity with which it sees through the Kalahari Desert sand that ranges from five to over 100 metres in depth. To this end it is working with Bell Geospace, which is supplying its 3D full tensor gradient (FTG) gravimetric technology.

The FTG acquisition system takes ultra sensitive real-time measurements of small gravity changes (gradients) caused by density differences in all directions. Gradient data can be directly related to geological structures such as kimberlites. This technology, which was first developed for the US navy’s Trident submarine program, has been used in the oil industry since 1998 and since 2002 it has been introduced into the mining and exploration sector. 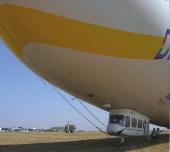 The airship preparing to take off.

De Beers has hired an airship from the Zeppelin Company for two years in which it has mounted the technology. The airship will provide low vibration so that the signal to noise ratio is better for the airborne gravity gradiometry than would be the case using other types of aircraft. The presence of the airship alone represents a first for southern Africa, as the Zeppelin airship is one of only three or four in the world, and the only one exploring for minerals. The project, which is costing some 10 million over 18 months, will spend the first months testing its systems, and for the first year to year and a half the focus will be on areas in the vicinity of Orapa and Jwaneng.

The airship has been flown to Botswana, where it will undertake 80,000 line kilometres covering some 10,000 km2 a year. It is believed that the system will provide a five to ten times increase in resolution compared with any other technology previously used, and the aim is to fly the Zeppelin 25 days a month for some eight hours at a stretch. The Zeppelin will probably fly at night in summer, as for each 3ºC increase in temperature it has to reduce its payload by 70 kg. Since it starts with a payload of 2,000 kg at about 25ºC some 300 metres above sea level this is pertinent. In addition, for each 100 metres above sea level it must operate it loses 70 kg of payload. This gives it a payload of typically 700 kg in the conditions in Botswana; it will thus be limited to carrying two pilots, the FTG equipment and the equipment operator.

The airship preparing to
take off.

The Zeppelin, which is some 75 metres long with three propeller engines, will travel at about 75 km/ hour during the exploration, and this represents optimal resolution coverage. It will also fly some 80 metres above the ground and with the gravity gradient signal inversely proportional to the distance from ground cubed the flat Botswana countryside represents an ideal application.

This technology will give De Beers a distinct advantage in its search for new diamondiferous kimberlites buried beneath the Kalahari sands since even deposits buried as deep as 250 metres below the sand will be clearly visible from the Zeppelin using the gravity gradiometer system. If such a deposit is buried to any great extent it is unlikely it would be discovered by any other method.

“Over the short to medium term it will give us a significant competitive advantage,” managing director of the Diamond Trading Company and soon to be CEO of De Beers, Gareth Penny, says.

Other countries in Africa where De Beers is currently exploring are the Central Africa Republic, where it has a 60:40 joint venture with government. Work there is early stage. The company is also doing early stage exploration in Zimbabwe. De Beers is also still undertaking exploration in South Africa, where McKechnie says there is still unfinished business. South Africa has been and remains good diamond country. It should be noted that the US$100 million exploration budget is targeted at kimberlites, and the marine exploration in Namibia, undertaken by Namdeb on Namdeb’s offshore concessions is not included here.MRA