Johannesburg, South Africa — 02 May 2012 – The deadline to complete Coal of Africa’s (CoAL’s) US$75 million acquisition of Rio Tinto’s South African coal assets has been extended to the end of May, allowing for the outstanding Section 11 approval from the Department of Mineral Resources (DMR).

CoAL CEO John Wallington has told Miningmx that the transaction, originally due for finalisation by Monday, was almost complete. “It’s only a few administrative functions that remain to be dealt with,” he said.

The acquisition of Rio Tinto’s Chapudi assets would transform CoAL into a substantial holder of consolidated mining and prospecting rights for coking coal in the Soutpansberg region.

The Chapudi assets are adjacent to CoAL’s existing Makhado project, where the group has already drawn up a draft feasibility study report and plans coal production of up to 5Mtpa. It is currently working on the regulatory aspects for the first stage of Makhado’s development.

Wallington said that when Makhado’s feasibility study commenced two years ago, the conclusion of the Chapudi transaction had not been sufficiently advanced to include these assets in the overall mine design plan. This has now changed, and a detailed review to evaluate the options arising from the Chapudi transactions was due to be completed by the middle of the year.

“Chapudi will give us much more optionality and flexibility going forward,” Wallington said. “The future mines can have increased scale and an extended life of mine,” he pointed out, adding that alternative sequencing was also now a possibility.

The company previously announced a black economic empowerment transaction with Rothe Investments over 26% of the Chapudi assets.

Meanwhile, CoAL continues to talk to Exxaro over the 30% option that the group acquired in 2009 to take part in Makhado. “We made a full presentation to Exxaro’s board and we’re now meeting weekly to take it forward,” Wallington said. CoAL remains keen for Exxaro to exercise the option in full, saying it would not only give the project substantial BEE credentials, but also a partner that understands the dynamics of mining coking coal. Exxaro has been given until 15 June to make a decision.

In another commercial issue related to Makhado, CoAL said bulk sample tests conducted by ArcelorMittal SA (Amsa) had confirmed the suitability of the project’s coal for future use at the steelmaker’s Vanderbijl and Newcastle plants.

Amsa previously provisionally agreed to buy between 2.5 and 5Mtpa of coking coal from CoAL’s Limpopo operations. It was now conducting similar tests on product from Vele and would, once completed, start discussions over a permanent commercial arrangement. 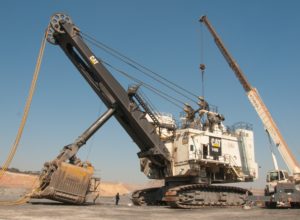