Africo Resources was ready to break ground on its development stage Kalukundi copper cobalt project in the DRC as far back as early 2007 but a legal dispute that has now been resolved delayed the project.

This was later followed by the mining review in the DRC which led to an amended agreement and an additional payment by Africo to the DRC government. The project has been slowed again, by current market conditions, which has seen Africo significantly scale back activities on the Kalukundi project. It has done so until global economic conditions improve to support better financing terms for the project. At the end of 2008 the company laid off its expatriate development team.

However, the Kalukundi property, located in Katanga province and 75% owned by Africo Resources, with Gecamines owning the remaining 25%, remains a very promising and valuable asset.

Kalukundi with the transcontinental Snel power line in the background which crosses the property.

Africo Resources, which was founded in 2004, and listed on the Toronto Stock Exchange in December 2006 completed a feasibility study on Kalukundi in 2006 based on a copper price of US$1.25/lb and a cobalt price of US$12/lb. This gave it a resource of 27 million tonnes in addition to the project’s proven reserve of 7.8 million tonnes.

The project is at the stage where it is ready to seek funding for its development and will redo its feasibility study to update the capital and operating costs. The company undertook a US$1.3 million, 57 hole, 4,300 metre drilling programme on the Kalukundi site completed in February 2009. The new information is expected to positively influence its resources and reserves.

In March 2009, Africo Resources signed a memorandum of understanding with state owned electricity provider Snel, which will see Africo finance studies focused on reinforcing Snel’s network to guarantee the availability of power to the project. This allows Africo the option to negotiate with Snel regarding the diversion of high voltage power lines to enable mining of the area that the lines currently overhang.

The power lines crossing the property are those representing the backbone of the Southern African power pool grid that extends from the DRC down to South Africa. These power lines currently sterilise some 1.4 million tonnes of economic reserves, not included in the project’s existing proven reserve estimate. They also overlie parts of two other fragments which show strong evidence of mineralisation.

Overall, Kalukundi is prime real estate in terms of its location in the middle of the DRC’s most prospective Katanga copperbelt province, situated as it is in the Kolwezi district, which makes it a geologist’s dream. It is 32 kilometres west of the Tenke Fungurume deposit controlled by Freeport McMoRan and 65 km by road from the mining centre of Kolwezi. Water facilities exist on site and the project shares road facilities with Tenke and First Quantum’s operations.

The electrified SNCC Kolwezi – Likasi railway passes two kilometres south of the property’s southern boundary. There is a siding at Kisanfu and a power transformer which supplies power to the rail line. 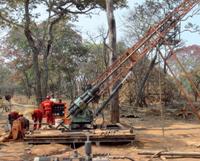 As it stands, the Kalukundi deposit has been defined through the evaluation of four fragments of mines series rocks. The reserve, which constitutes oxide materials, has a grade of 2.37% copper and 0.69% cobalt. The depth of oxides varies from fragment to fragment and ranges between 40 metres down to depth exceeding 130 m. Below the oxide material is a zone with mixed oxide-sulphides over a vertical depth of about 40 m within which some supergene enrichment may have occurred.

The feasibility study on the project began in May 2004 with resource drilling and was finalised in May 2006 with the consolidation of all of the research data into a comprehensive document.

The mining of Kalukundi would involve conventional open pit selective exploitation using a mining contractor. Africo Resources expects to operate a multiple four pit, multiple cut back method which will require timely pre-stripping and blending of ore to maintain continuity of feed.

The mining based on the original feasibility study was modelled using a waste to ore stripping ratio of 4:1. Africo Resources CEO and president Tony Harwood predicts less than 3.5:1 stripping ratio in the early years of mining. The planned life of mine based on that feasibility study is ten years, with a payback period of four to five years depending on metal prices and input costs. The project has targeted the lowest cost quartile in terms of operating costs.

Harwood says that anticipated capital expenditure to build the Kalukundi project will exceed the US$210 million described in the original feasibility study, however, the company is well capitalised having raised some Cd$100 million in a placement in June, 2008. It would look to raise an additional capital to fund the development of the project when markets and metal prices look more certain.

“We would elicit support from African based financial and development institutions and our partners. If possible we would look to source as much of the finance as possible as debt funding.”

After the finalisation of financing the project, which would use solvent extraction electrowinning (SXEW) to produce both cathode copper and cobalt metal, would be as little as 18 months away from production. South African metallurgical plant designer and builder MDM completed the study on the process plant, which in all likelihood will be modular to allow for ease of expansion of the project.

Outcrops at the Kalukundi site
in the Katanga copperbelt
of the DRC.

Plans are advanced in terms of moving a village of some 250 families from the mining site. And the company has been active in implementing social programmes, including a market garden project, hygiene and sanitation campaigns, anti-malaria and HIV/AIDS awareness campaigns, and the establishment of a fresh water depot and a school for the nearby Kisankala village. In addition to the Kalukundi project Africo has rights in terms of a purchase agreement to the adjacent Mashitu property.

It also owns the rights to three large scale prospecting licenses for gold in north-eastern Zambia, which cover the main parts of the Mporokoso sedimentary basin. The licenses cover a strike length of some 280 km, over an area of some 5,850 km² in the south-eastern margin of the main Mporokoso basin, as well as sub-basins containing prospective Mporokoso group rocks.

The Mporokoso basin has very similar geology to the gold rich Witwatersrand basin in South Africa and the Tarkwa basin in Ghana, both major gold producers. Previous work included eight reverse circulation boreholes and six diamond core drill holes which have intersected gold mineralisation. Further studies are under way to define the best areas of the basin in which to focus the search for economic concentrations of gold mineralisation.

Africo Resources, with one asset poised to be a low cost producer in one of the world’s prime copper jurisdictions, is looking for other opportunities that may come about as a result of the global downturn, including assets that are in pre-production in the region.