A contract in Madagascar for Boart Longyear’s Environmental Drilling Division’s Minisonic drill rig provided an opportunity to test this rig outside its home base of the USA for the first time. The excellent coring samples it yielded were critical in enabling customer Rio Tinto to take a positive decision on pursuing a project in Madagascar’s Mandena mineral deposit.

The Minisonic’s job was to conduct sonic sampling that would validate drilling results already obtained from 1,500 vibra-core holes to estimate reserves in Mandena, near the village of Fort Dauphin on the southeast corner of the island.

Vibra-core drilling is a conventional and simple way to advance rods through unconsolidated material but, even with 1,500 holes drilled, Rio Tinto questioned the reliability of this sampling method and felt that uncertainty still existed as to the true deposit characteristics.

The principle of sonic drilling used by the Minisonic drill rig comes from a high-speed vibration within the drill head. Since the head is attached directly to the drill rod, the vibration is passed down through the drill bit, which causes the rock it encounters to displace and fracture.

In total, 30 definition holes were drilled to depths between 15 and 30 metres at an average rate of 35 metres per 12 hour shift.

Phase two of the contract involved extracting a 15 tonne bulk sample in order to obtain a representative cross section for metallurgical testing. There were concerns that a sticky clay layer at the base of the deposit could complicate dredging operations and present too much of a challenge to spiral classifiers during extraction. Although a pit had been dug previously for a bulk sample, insufficient data was recovered and the rig had the capability to obtain the necessary samples at a much higher productivity rate (56 metres per shift) and dump the material directly into drums for processing.

Though it was the first time the Minisonic had been used outside the USA, the Environmental Drilling Division was satisfied that the technology has proven its capability in extracting undisturbed samples in ilmenite sand and Rio Tinto was able to positively identify a potentially lucrative project site. 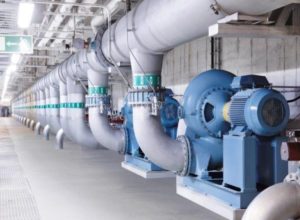