Drilling 20,000 metres for gold in Ghana

Toronto based junior, Midlands Minerals, initiated a 20,000 metre drilling programme on its Sian/Praso property in Ghana this year. One of the goals is to upgrade at least 30% of the existing resource at Sian to a measured and indicated category. Another is to expand the size of the resource by drilling on the contiguous Kwahu Praso property to the north and south of the Sian deposit. 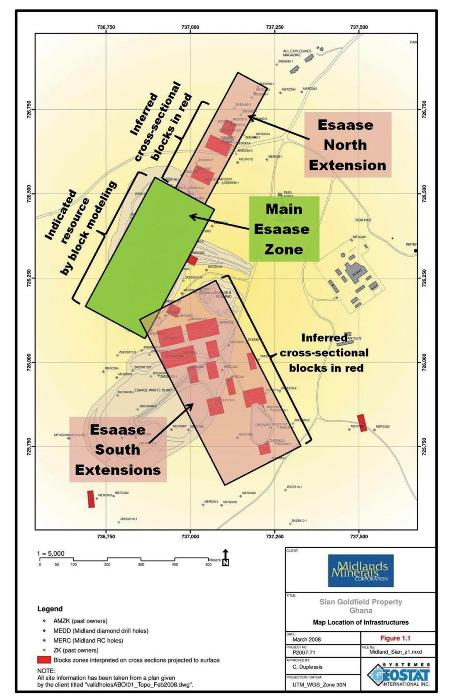 The Sian property contains Esaase and Ampeha, two previously producing open pit mines. Midlands’s contiguous Kwahu Praso project, which was once part of Sian, contains extensions of the Esaase and Ampeha trends. Sian and Praso are just 30 kilometres north-east of Newmont’s more than 8.7 million ounce Akyem gold deposit. Midlands has a contract with Minerex Drilling Contractors, which is providing reverse circulation and diamond drilling services. Of the 20,000 metres of infill drilling planned, up to 18,000 metres will be reverse circulation and about 2,000 metres diamond core drilling. Infill drilling is planned in the Sian open pit (Esaase pit), the northern and southern extensions, and on the Mpeyo East and West zones. The Mpeyo zones are about 60 to 100 metres apart and were drill intersected in the previous drilling program conducted between April and June 2008.

This year’s drilling campaign began at the end of January 2010, and by early March more than 3,000 metres had been drilled. Infill soil assays have defined drill targets on Praso North and South and these will be drilled in the second quarter of 2010 as part of the current 20,000 metre program.