Australian company Avonlea Minerals has turned its primary focus to exploration in Namibia and to that end has acquired some 12,000 km2 of exploration licences in that country.

The company’s most advanced project is on its 1,000 km2 Okatumba licence in northern Namibia, where it has identified significant iron ore potential at four prospect areas; Hammerhead, Bronzy, Nail and Thresher. Avonlea began an initial 1,000 metre drilling programme in February 2010, after a surface channel exploration program culminated in a conceptual non- JORC compliant 1.0 to 1.9 billion tonne magnetite rich target (20% to +30% Fe). This included the higher grade Thresher prospect with a conceptual target of 150 plus million tonnes.

Avonlea’s agenda for the first half of this year is to consolidate the iron ore interests in north-western Namibia and it has lodged new applications for exclusive prospecting licences. It is also aligning various of its exclusive prospecting licences to commodity specific Namibian subsidiaries. Those already registered are Himba Iron Exploration, which has an iron ore focus, Tumba Base Metals, which focuses on base metals, and Eris Mining which is focused on rare earths and metals. 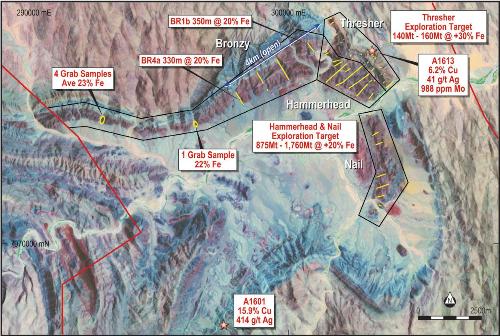 After its initial drilling campaign at Okatumba the plan is to undertake a further drilling programme to delineate an inferred JORC compliant iron ore resource, and secure a strategic cornerstone investor and joint venture partners. The company plans to monitor and help with progressing the government feasibility initiative for port and rail facilities to the planned Cape Fria port in northern Namibia and the associated Angra-Fria rail line. At the same time Avonlea will commence engineering and desktop studies regarding the iron ore potential of its properties.

Avonlea will also initiate regional exploration on its other granted exclusive prospecting licences.

The company says it turned its attention to Namibia because it sees the country as richly endowed with natural resources including uranium and diamond deposits, but importantly significant polymetallic deposits. It views Namibia in the top five nations worldwide in terms of zinc, copper and lead reserves, but this potential remains largely underexplored. Avonlea also sees Namibia as one of Africa’s most developed and stable countries with a significant mining culture and effective mining legislation.