Enditrade is a 100% owned subsidiary of Endiama, while Chavda & Associates is a procurement, logistics and support company with long experience in the mining sector. Chavda & Associates, headed by Mahaveer Chavda, also has an extensive and impressive track record in dealing with Angola’s infrastructural challenges.

Endiama is a shareholder in all of Angola’s diamond mines, and the rationale behind the partnership deal between Chavda and Enditrade is to ensure lower costs at these mines through efficient management of the logistics chain.

Gomes says that this deal, which has Endiama’s full support, was made possible thanks to the strategic vision of Endiama’s board.

The deal comes as Angola experiences a growth in diamond mining. Gomes says that new and long standing mining operations will be affected in different ways. For existing operations, which have managed their own logistics and services, it will accelerate the centralisation of these services. For new companies, a condition is that they operate through Enditrade, and in doing so the economies of scale of a central procurement and logistics operation will lower operational costs.

“Instead of isolated individual procurement policies we are looking to use synergies to reduce costs,” Gomes says. “The partnership between ourselves and Chavda is to ensure we obtain the best quality products on the market at the best prices, with the shortest lead times. In this way we can optimise the services we provide to the mining operations in Angola.

“We chose Chavda & Associates because it has been dealing with Angola’s mining sector for some time, and it has the expertise to ensure we achieve our goals. The relationship between the two companies is good and the process of building trust is important in business relationships,” Gomes says.

An additional factor in favour of the deal was that Chavda & Associates as a South African BEE group makes it a very eligible trading partner. 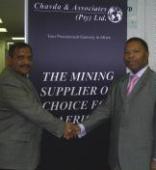 “Of course while we want to give mining companies in Angola the opportunity to make savings, we also want to ensure that Enditrade and Chavda are profitable. This venture represents a good challenge for us,” says Gomes.

Commenting on the partnership, Mahaveer Chavda says, “Chavda is in it for the long haul and the new deal will bring benefits to South African business.”

In 2004 Chavda & Associates procured more than R38 million (US$6 million) worth of goods and services, as well as indirect exports for Angola. With the new deal encompassing more than 40 diamond mining operations Gomes says that the amount of this trade will grow substantially. Enditrade will tender for the orders from all the mines in Angola, and the new joint venture is now focused on consolidating business relationships with a host of quality suppliers in South Africa.

Chavda says that systems are in place to deal with the increasing volumes of trade, and the company is moving to larger premises and hiring on additional Portuguese speaking employees.

Gomes believes that the increase in volume of deliveries to the mines in Angola will see infrastructure in the country develop and improve. At this point most of the volume of material and products supplied to the mines are delivered by road and Enditrade has a fleet of 60 trucks, made up of cargo and liquids transport vehicles.

He says that Enditrade’s first objective will be to serve the mining market in Angola and then any presence it may seek in other markets will come from this base. Chavda Travels offers an opportunity here as it can facilitate Angolan delegations from other industry sectors.MRA