The government of Eritrea as well as the foreign mining companies involved and moving into the country are agreed that the country is moving towards a mining boom and is on the verge of becoming a new entrant on the international mining map.

“I agree with the growing predictions that Eritrea is moving towards a mining boom. It will not be long before we see this happening in our country,” Alem Kibreab, director general in the Department of Mines in the Eritrean Ministry of Energy and Mines, says.

“I firmly believe that Eritrea is going to be one of the new entrants on the mining map of the world,” he tells Mining Review Africa’s contributing editor Lionel Williams in an exclusive interview.

“One of the main reasons a growing number of foreign companies are attracted to Eritrea is because it sits on a patch of the Arabian Nubian Shield, the geological feature that stretches from Saudi Arabia and Yemen in the east to Sudan and Egypt in the west,” he explains. “We are a small country, but over 60% of our land mass is covered by Nubian Shield rocks which are home to several rich gold and base metal mines in the region.

“And this is not simply wishful thinking. The current exploration situation verifies it. In a country which has barely been explored we already have some four to five worthwhile discoveries. And looking ahead, the same geology that hosted these discoveries extends along strike for hundreds of kilometres,” Kibreab adds. 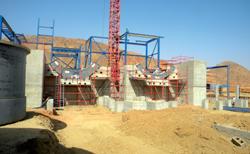 Front view of the SAG and ball mill
foundations at Bisha.

“I am on record as saying that reserves identified in Eritrea so far are only the tip of the iceberg, and I stand by that viewpoint. Unfortunately I cannot back this statement up with figures at this early stage, but it won’t be long. Various feasibility studies are underway by a number of the companies who have exploration licences, and when we have those results I will be able to give you an accurate assessment of the total reserves of gold, copper and zinc hosted in this country,” he states.

Foreign miners agree with Kibreab on the potential, but the Eritrean government insists that the mining sector must be developed slowly and carefully to prevent what he calls ‘the resources curse,’ where oil and minerals have spawned corruption and violence elsewhere in Africa.

Cliff Davis, CEO of Nevsun Resources, the Canadian based gold and base metal developer which is set to become the first major producer in Eritrea, says a mining boom is certainly possible in the country, particularly given the strong support from the government. “The ministry has always been very supportive of the industry, and the State of Eritrea has demonstrated over and over again that it honours its commitments. They are long-term thinkers and are interested in developing their resources for the generations in the future,” he adds. 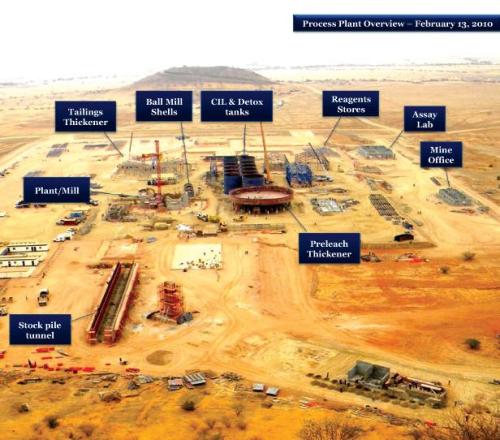 “In the next ten years other nations in the region will look at Eritrea’s mining boom and they will want in. They will relax their laws and it will become a regional boom,” says London Africa’s Eritrea manager Timothy Strong. “If you look at the geography, Eritrea is a relatively small nation compared to African giants Sudan and Egypt, but it has many more foreign mining companies than the others combined,” he points out.

Probably the most important contributing factor is the fact that Eritrea’s mining law is up-to-date, attractive and competitive, and provides considerable benefits and incentives to investors. The law sets the government’s stake in any mining project at 10% with an option to buy a further 30%. This is a small claim compared to other countries in the area like Egypt which mandates a 50% stake or Sudan at 60%. Industry experts say that it is these relatively liberal mining terms that have led 16 companies to obtain licences to explore in Eritrea.

Tucker Barrie, an economic geologist and an expert on the Arabian Nubian Shield, says neighbouring countries have already taken note that foreign companies are now prospecting nearby. “It is not going to wash with any foreign company if Khartoum keeps asking for 60% of gold mining projects. That’s why even though it is 50 times the size of Eritrea, there is only one foreign company mining there,” he says.

Analysts say an impending mining boom in Eritrea will challenge its oil-rich neighbours to make it easier for foreign companies to prospect across a massive geological structure in the region which is rich in base metals and gold. There are a number of other factors which combine to make Eritrea an attractive destination, and which make life a lot easier for the companies involved in this country.

“There is barely any vegetation cover obscuring the host rock, which makes exploration easy and cheaper; there is a fairly well developed infrastructure – the port is only a few hours’ drive from most of the deposits; there is a strong government commitment to develop the mining sector; and this commitment is enhanced by the full support of the regional and local administrations, the army and the communities where the companies operate,” Kibreab elaborates.

The Bisha Detox and CIL tanks

Big mining companies such as Anglo American secured exploration licences after independence, but they quit Eritrea when a two-year border war broke out with Ethiopia in 1998, and they have not returned. “After 2000 we remained with the juniors, and frankly I don’t regret it, because they are the ones who go aggressively for discovery,” Kibreab says.

Most of the 16 companies that have been awarded exploration or mining licences by the government of Eritrea are from overseas. Fourteen are from Canada, Australia, China, India and Bermuda, with the remaining two held by shareholders in Eritrea, Libya and the United Arab Emirates.

Currently the most advanced mining project of the ‘big three’ in Eritrea, Canadian-based Nevsun Resources Limited’s Bisha high grade gold, copper, silver and zinc project, is scheduled for hot commissioning in late 2010 and full production in the first quarter of 2011, making it the first modern day mine in the country.

“Over the 10-year life of mine, which is costing about US$260 million, we expect to produce 1.06 million ounces of gold, 9.4 million ounces of silver, 734 million pounds of copper and a billion pounds of zinc. Other than some exploration within our existing licence we don’t really have any further exploration plans at this stage,” he adds. “We are totally focused on getting the project into production and positive cash flow, but in the long term it is possible we will look at other opportunities after we are in full production.”

Second in line for production in Eritrea is Australianbased Chalice Gold Mines Limited’s Koka deposit at the emerging Zara gold and base metal project, which could be in production by the second quarter of 2012.

Chalice CEO Doug Jones tells Mining Review Africa that, assuming the current feasibility study proves positive, it would be presented to the Eritrean authorities and the six to 12-month permitting process would start. “This means construction could start by early 2011, so first gold pour could happen by the second quarter of 2012,” he estimates.

“We are already busy with near-side exploration with a view to expanding our reserves/resources and extending life of mine. We are also planning to explore with a view to establishing other separate gold mines in other parts of the Zara project. We have a large land holding and there is definite potential for further discoveries that could either be stand-alone mines or satellites to our current Koka project,” he explains.

“Looking to the future, we could have several gold mines producing 150,000 to 250,000 ounces a year, as well as a possible base metal deposit under development,” Jones predicts, “but it is early days and we would need to see a lot of exploration success to achieve this.”

Third of the ‘big three’ is Sunridge Gold Corporation, a junior exploration and development company focused on the Asmara project.

The Asmara project covers 925 km2 in central Eritrea, located immediately to the north, south and west of the capital city of Asmara. The infrastructure is excellent with roads, power, water and airports servicing the project area.

A positive preliminary economic assessment study released in June last year shows that the Asmara project includes four deposits with total indicated 43-101- resources of: 1.28 billion pounds of copper, 2.5 billion pounds of zinc, 955,000 ounces of gold, and 31.2 million ounces of silver. It is considered to have many as yet undrilled targets that warrant further exploration work, and Sunridge plans to drill many of these targets in the near future.

To sum up, mineral occurrences in Eritrea include copper, zinc and lead sulphides in the Asmara region; primary gold deposits west of Asmara; iron deposits east and south of Asmara; and a nickel-chromite deposit in the northwest near the Sudanese border. The companies involved are engaged mainly in the exploration of gold, base metals, iron and potash, with gold and base metals being the first to be mined.

“Eritrea’s deposits are not likely to be larger than those in countries like South Africa or the Democratic Republic of Congo, but there is no doubt that income from royalties, taxes and new jobs could ease the government’s fiscal problems and spread more wealth among its five million people, many of whom are living on the margins of survival. An accelerating mining boom over the next five years could provide substantial support to other sectors,” Kibreab says, “and could provide a future lifeline for the country’s impoverished economy.”