The Chamber of Mines has voiced its strong opposition to Eskom’s R22 billion Regulatory Clearing Account (RCA) application to the National Electricity Regulator of SA (Nersa) in respect of 2013/14.

This application is over and above the 8% tariff increase Eskom was granted for that year as part of the third multi-year price determination. The Chamber of Mines represents more than 90% of South Africa’s mining industry by sales value.

Chamber of Mines CEO Roger Baxter notes that: “The mining industry supports Eskom’s intent to resolve South Africa’s long-term energy crisis. We also made clear that we have no objection to the recovery of unforeseen costs arising from circumstances that Eskom cannot control.”

But, Eskom’s R11.7 billion lower-than-planned-for-revenue was caused, by its own admission, by Eskom’s own failure to manage its projects and operations efficiently.

Another approximately R8 billion in recovery is due to unbudgeted for spending on generating diesel power to make up for normal supply shortfalls. Again, this arose as a result of poor performance of generation plants amounting to some 75% availability and late commissioning of new power stations.

Further, the lower sales resulted in very large part from Eskom’s own inability to supply sufficient electricity to a number of large customers. A number of manganese and ferrochrome smelters were forced to operate below their design capacities because of lack of power.

Baxter adds: “The Chamber does not support the recovery of costs and lost revenues that could have been avoided by the utility’s better management.

“The RCA would also penalise these customers for Eskom’s own failure to supply sufficient electricity and at the same time reward Eskom for its operational failures. On the whole it appears that Eskom’s customers are expected to bear an excessive share of the revenue risk.”

The Chamber adds that this application needs to be seen in the context of weak commodity prices and cost increases far outstripping inflation. 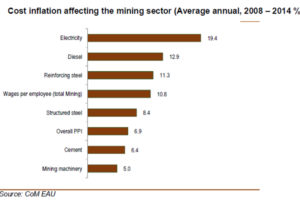 Electricity costs have been increasing at a greater rate than those of other cost components (see graph), while electricity’s contribution to total costs has increased significantly.

For example, in the gold sector electricity represented an average 20% of total cash costs compared with 8% in 2008.

Since 2010 there has been a significant decline in mining revenues and profitability. Employees and investors have borne the brunt of this downturn.

Many companies have had to restructure operations, with consequent job losses. The companies, along with the Department of Mineral Resources and unions are considering measures that will help curb the need for retrenchments implemented to cut costs.

Indications are that the current cost increases and recoveries being sought by Eskom will almost certainly undermine this effort, and will result in more operational closures and job losses.

Given that many operations are currently operating at a loss or at a very marginal profit, the Chamber estimates that Eskom’s proposed electricity tariff increase of 16.6% would jeopardise an additional 20 000 of the 119 000 jobs remaining in the gold sector, and another 20 000 of the 189 000 jobs in the platinum sector.

Investor concern is already reflected in the fact that the mining industry’s to foreign direct investment (FDI) fell to 14% in 2013, down from 25% in 2010.

In conclusion, Baxter notes: “Since 2008 there has been a 300% increase in the electricity tariff. As a result of intensive energy management and efficiency projects, some Chamber members have managed to contain their overall costs of electricity to 200%. However, there is little remaining scope for further effective energy efficiency exercises.

“A more-stable electricity pricing environment is critical to ensuring some form of investment takes place in the future.”