The Essakane project in Burkina Faso is ramping up to its nameplate capacity of some 315,000 ounces of gold a year and Iamgold advanced the mine’s start-up date.

Processing of ore through the mill was to begin in June, four to six weeks ahead of the previously announced production schedule, and five to six months earlier than the originally projected start-up date of year-end 2010, senior vice president and managing director of Iamgold Africa, Brian Chandler says.

He describes the ramp up process as straightforward. “We are using a standard crushing, milling, carbon-inleach plant; all the mechanical equipment is proven and the metallurgical process is well known. All the large mechanical equipment was in place early this year,” he tells Mining Review Africa.

Iamgold has managed the construction and the operation of the project in-house with other equipment suppliers assisting, while AMC Minpoc has done the detailed engineering,” Chandler says.

The project, with a capital cost of US$440 million includes obtaining the mining equipment, doing the pre-stripping and earthworks, undertaking the mill and plant construction, establishing the mine power house, building roads, infrastructure and the mine camp and the successful resettlement of eight villages, representing 2,981 households. “The budget was tight, but we are doing the project on budget.”

Iamgold bought all its plant new, and the timing of the project beyond the peak period leading up into 2008 had only some mitigating effects on plant and material prices; a lower steel price did benefit the project though.

The company’s interim president & CEO Peter C Jones says, “Since Iamgold acquired the Essakane property in early 2009, we will have successfully completed, on budget, an ambitious and logistically challenging project.

Essakane is a cornerstone of Iamgold’s future growth and is the first greenfield mining operation built by our company since Rosebel in Surinam, acquired through our purchase of Cambior in 2006. The Essakane gold mine is the largest private foreign investment to date in Burkina Faso and we expect that it will provide significant benefits to all stakeholders,” Jones says. Essakane has a resource base of 4.3 million ounces, which will see some 93 million tonnes mined at 1.4 g/t over a life of mine of nine years.

Beyond the Essakane project, Iamgold has interests in five existing gold operations in Africa, which account for almost half of the Company’s production. Some 170,000 attributable ounces a year come from the Gold Fields operated Damang and Tarkwa mines in Ghana, some 65,000 ounces from the Yatela mine in Mali, and some 130,000 ounces from Sadiola in Mali.

Iamgold owns and operates the Mupane mine in Botswana which produced 61,000 ounces in 2009. Overall, Iamgold receives almost one million attributable ounces of gold a year from seven operations in three parts of the world. Iamgold believes in an aggressive approach to exploration and its find of the Sadiola deposit in Mali was responsible for launching the company’s success as a gold producer. Some of the African mines in which the company has an interest are short life operations, while others have substantial life remaining.

Sadiola has about five years life of mine remaining, though feasibility work is being done on a three million ounce deep sulphide body, which could add an additional eight years to the operation’s life. Yatela is a short life mine, but Iamgold has an attributable 20% of the 2009 estimated 125,000 ounces from the Tarkwa mine, operated by Gold Fields in Ghana, which has a 13 year life of mine remaining. The nearby Damang mine in Ghana has a remaining ten year mine life left.

The company was pleased with the performance of its Mupane mine in the recent past when it reduced costs from US$600/oz to under US$400/oz. This was achieved by Iamgold bringing in its own fleet and relinquishing the services of the mining contractor. That mine has a measured and indicated resource of 266,000 ounces of gold.

Iamgold moved rapidly in accelerating the Essakane project, which it took over from Orezone Resources in February 2009. A few years earlier, Gold Fields had been considering developing it into a joint venture with Orezone Resources, but withdrew this proposal in 2007. Gold Fields believes that Essakane is a good project, but not one that fits its own profile as a major gold producer. After Orezone was unable to raise the capital to advance the project during the financial crisis, Iamgold purchased it for US$238 million. 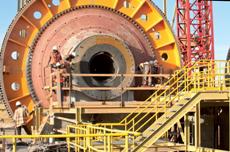 Fuel is expected to amount to between 15% and 25% of the mine’s costs with labour accounting for another 25%. Cyanide consumption is not forecast to be a concern with the rock type at Essakane, and the recovery rate is anticipated at 93%.

The project was feasibility ready when it was purchased, though the detailed engineering had not yet been completed. At current gold prices, current assumptions and operating costs the Essakane project is expected to provide a three-year payback.

Chandler says that the company has done some new infill drilling and new pit exploration in 2010 to ensure a solid start for Essakane, which will mine primarily from a single open pit. The orebody remains open, and Iamgold is also looking at the potential of the Falagountou satellite pit.

Production at Essakane will top out at about 350,000 to 400,000 ounces a year for the first few years, when Chandler says it will operate at higher throughput on soft ore. “After that we will need to modify the mill to keep the production rate steady.”

Because the mine plan calls for predominantly saprolite and transition ore feed in the initial four years of operations followed by almost entirely fresh ore feed for the remaining mine life, Iamgold saw an opportunity to increase mill throughput for those initial four years of operations. Saprolite ore requires only minimal grinding for the residual mineralised quartz veins within the saprolite mass and can be processed at a much higher rate.

Mining will be by done using a conventional drill, blast, load and haul surface operation. Annual mining rates will be 32 million tonnes per year for the first four years after which it decreases to 25 million tonnes a year and stabilises at 15 million tonnes a year thereafter. Grade control samples will be collected using reverse circulation drills and drill rigs will be used for drilling production blast holes. Loading will be accomplished with hydraulic excavators and wheel loaders.

The project’s remoteness was always going to raise logistical challenges, with the options for routing material being via Ghana or Abidjan in the Cote d’Ivoire, the latter being a better route for shipping goods to the francophone country of Burkina Faso. “The operational logistics will see some ten to 12 trucks a day travelling to the mine on an ongoing basis, taking the 350 km road from Ouagadougou to Essakane.” The last 75 km of the road is gavel, and the government of Burkina Faso maintains it.

Power for the operation is being supplied by five Wartsila gensets, on an N+2 contingency basis. These units will provide a total capacity of 27 MW, with one unit as a standby unit, and one to cover maintenance outages. 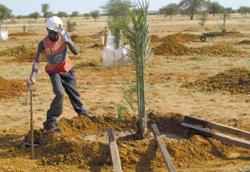 In partnership with community engagement and development specialist RePlan Iamgold relocated eight small villages representing 13,473 Burkinabees. “We had our own community representatives to do the planning and deal with the village elders,” Chandler says. “The process had to be measured to ensure it was done properly, and it also included the construction of a new school building and a new mosque and churches.”

Water in this arid Sahel region is obtained from a river that runs during a short wet season. “We have put up a dam across the river, and have a spillway that captures less than 5% of the water for the mine’s use. We have an 800,000 m3 pond to store water, and pump water from there to the mill site.” Overall the operation’s water consumption is expected to be some 450,000 m3 a year.

Potential risks are that an extended drought in the area could impact on the operation, as could major escalations in fuel prices, taking into account that the project’s mining equipment and power supply are linked to this.

The mine will employ some 1,300 people and it is believed that Essakane will be the biggest single contributor to Burkina Faso’s GDP. The government of Burkina Faso has a 10% free carry and is supportive of the mining sector.

The plan is to build on the establishment of Essakane to achieve a hub for the regional gold production, with other orebodies that could provide feedstock to the plant. An orebody within 30 km having a minimum 150,000 to 200,000 ounces would be able to contribute to the life of the operation, depending on gold grades.

Iamgold remains focused on West Africa and has a corporate office in Dakar, which it uses as its African hub. This is where Chandler is based. The company has ten people working in an operational basis in Dakar and some 15 people involved in exploration in the region.

The global downturn was always going to be a crisis for some juniors in Africa’s mining sector and opportunities for other groups. Iamgold was able to capitalise and gain hold of a very good project. Chandler attributes this to the fact it was able to undertake a fast due diligence, and be responsive. If Iamgold was not already seen as a well-established mid-tier global gold producer, Essakane will comfortably place it in the upper tier of that range. In a regional context it can be seen in the same league as companies like Redback and Randgold both of which also saw their success built in West Africa.