Etruscan Resources, which is undertaking exploration in West Africa on early stage projects in Ghana, Burkina Faso, Mali and Cote d’Ivoire is also continuing exploration at Youga, its operating mine in Burkina Faso. Youga began gold production in March 2008, and with the mine now stabilising Etruscan is paying attention to optimising the operation.

It is also looking to develop satellite deposits to extend the seven year mine life. The Youga mine is located about four kilometres north of the Ghanaian border and 180 kilometres southwest of Ouagadougou, on the 80 kilometre Youga gold belt.

A number of potential satellite deposits have been identified within a three kilometre radius of the existing plant and Etruscan is evaluating these areas for conversion to reportable resources and reserves. In addition, an exploration program at Bitou on the Youga gold belt some 35 km from the mine is intended to find additional reserves and new deposits that will further extend the mine life at Youga.

Etruscan is undertaking reverse circulation drilling on its Bitou permits to determine the resource potential of the main Ouaré Zone, where previous work, including trenching and reverse circulation drilling, identified significant mineralisation with resource potential over a strike length of 575 meters. Additional exploration work by Etruscan expanded this potential strike length to over two kilometres.

Etruscan reported that Youga poured in excess of 6,500 ounces of gold in September and this represents 98% of the design output of 6,700 ounces a month. Mining is currently being carried out from two pits; the A2 Main and the West Pit Zone 1. The West Zone 1 pit is a higher grade, low strip ratio orebody which started production in August and will continue to allow for the steady improvement of gold production over the coming months. 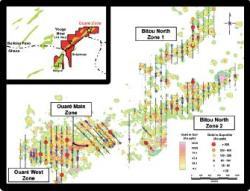 Satellite deposits along the Youga
gold belt will extend the life
of the operation.

The Youga gold project is comprised of open pit mining from five pits with the ore being processed though a conventional CIL/gravity plant having a design capacity of one million tonnes a year. Mineable reserves are 6.6 million tonnes with an average grade of 2.7 grams per tonne containing 580,000 ounces of gold. The project benefits from a yearround water supply from the nearby White Volta river system. Access to grid power via the northern grid of the Volta River Authority in Ghana was forecast for fourth quarter of 2008. A 15 kilometre power line was being built from the town of Zebila in Ghana directly to site. The capacity of the line is designed for a minimum transmission of 10 MW. The current 8 MW diesel generator system will then act as a back-up power plant to ensure constant power to the site.

The Youga facility has been designed for maximum operating availability and in particular, the mill drive system was supplied new with a second new drive train (motor and gearbox) being stocked on site as a spare.

Drilling and blasting is required prior to mining. All of the pits contain hard-rock material, and there are mineral free digging areas. Following blasting, the ore is excavated and transported by conventional mining gear. The primary fleet consists of a 120 tonne excavator and 100 tonne haul trucks. The drilling and blasting is being undertaken under contract with Nitrochimie SNC and the mining under contract with PW Mining International.