Since 2003, the largely Zimbabwe based African Consolidated Resources (ACR) group has built up a strong portfolio of exploration tenements in that country.

Three years ago the exploration group listed on AIM to strengthen its first mover advantage in Zimbabwe. ACR CEO Andrew Cranswick, a fourth generation Zimbabwean, believes that the company holds one of the best exploration portfolios in the country. He suggests that, as a trend, the environment for doing business in Zimbabwe is starting to improve and a number of ACR’s projects can progress to feasibility and mining stages.

"This is reflected by seven full flights a day to Zimbabwe, with people seeing opportunity there.”

Since ACR’s inception it has spent US$25 million on exploration in Zimbabwe and, after Zimplats, is the second largest investor in the country’s mining sector. “The company has kept a low profile until recently and has moved from a land acquisition strategy to one of exploration and progression of projects up the value chain,” Cranswick says. 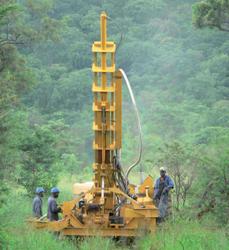 Drilling at the Peerless gold project

ACR’s portfolio includes a number of gold projects one of which, Pickstone-Peerless located in the midlands of Zimbabwe, has a JORC resource of 500,000 ounces of gold at 1.5 g/t. The tailings of this property is being processed in a partnership with TWP. Pickstone was last mined in the 1970s and the project has two parallel trends, giving it a million ounce potential. The two historical mines, Pickstone and Peerless, have historical production of some 500,000 ounces of gold and were mined to a depth of 750 metres. “The tailings project is not a company maker, but it will give us some cash flow,” Cranswick says.

Other gold projects in ACR’s portfolio include the old Giant mine in the country’s midlands with a JORC resource of 300,000 ounces of gold from 4.4 million tonnes at 2.2 g/t. Extension drilling on that deposit has been contracted, and this is expected to increase the resource to 500,000 ounces. The mine had historic production of 560,000 ounces of gold at about 8.0 g/t.

Cranswick is particularly excited about a rock phosphate deposit ACR is drilling at Chishanya, in the east of Zimbabwe located about 300 km from Mozambique’s Maputo port where the plan is to have a resource of approximately 100 million tonnes delineated this year. “Phosphate is the most strategic mineral in the world,” Cranswick says.

The phosphate rock resource, once proven, can open itself to the feasibility of medium term fertiliser production. A second option is to produce phosphoric acid if the economics prove to be sound. An in-country sulphide source exists, and there is potential in-country production of ammonia from coal bed methane.

The Chishanya carbonate complex comprises four carbonate intrusives with a 10 hectare surface expression, and a known resource grading 8% to 12% P2O5. Rock samples, with grades of up to 20% P2O5, were found in neighbouring untested carbonate pipes.

ACR has two nickel projects in Zimbabwe, of which one is the Horseshoe project. It has good metallurgy and a large scale JORC definition is targeted. The other is Perseverance, a proven sulphide rich body with a 30 km strike length and is currently undergoing airborne electromagnetic surveying and drilling.

Looking at the ACR’s copper projects, exploration drilling is required to define resource drilling targets at the company’s Cedric project. On the northern end of the Great Dyke, similar work is required on platinum prospects owned by ACR. This project has high grade platinum potential that outcrops and extends to a depth of 500 metres.

ACR has a good diamond exploration position, with Zimbabwe’s diamond potential increasingly being uncovered. Exploration is ongoing with multiple kimberlites defined. ACR is the legal owner of Marange, a deposit which has been publicised in a context of illegal production of blood diamonds. ACR has won a court order for its rights to this field to be upheld.

However, on the ground it is unable to gain access, illustrating that progress towards implementing rule of law in Zimbabwe still has some way to go. Zimbabwe’s two established legitimate diamond operations are that of Rio Tinto and the privately owned River Ranch deposit. ACR is continuing with litigation and negotiations on the Marange project. However, Cranswick prefers to emphasise some positive trends in the country, including deregulation of gold sales, the US dollarisation of the currency used in Zimbabwe, a trend towards a more robust and independent judiciary, and a much higher level of interest in foreign direct investment being expressed.

The company is keeping its options open with regards to its various projects and has the potential to mine, form joint venture partnerships, take a royalty position, or sell outright. “We want to move our projects up the value chain, but we don’t want to lose sight of our focus as explorers,” he says. ACR will cut down its exploration holdings by 50% as the land is expensive to hold and the company says it does not believe in warehousing unproven ground.

The company will have cash flow from its gold tailings project by the middle of this year, and is undertaking drilling to lead to a pre-feasibility study for the production of 100,000 to 200,000 ounces of gold a year. This will be partly funded by the cash from the tailings project.

ACR is hoping to achieve about five JORC resource declarations by the end of 2010, three on gold projects in Zimbabwe’s central midlands. Another is aimed for the Horseshoe nickel project, and the fifth is the Chishanya phosphate project.

The company had five rigs contracted in February 2010 and was speaking with four competing drilling contractors totalling a potential 25 rig capacity. ACR has over 200 employees in Zimbabwe, of which about 98% are Zimbabweans.