The coming end of a ban on small-scale mining in Ghana will increase the difficulties involved in countering illegal mining, likely seeing the practice remain widespread.

The government’s decision to lift a ban on small-scale mining, announced in May 2018 and to be implemented before the end of the year, will add headwinds to the fight against illegal mining (known in Ghana as galamsey).

It will hamper the efforts of security forces by making the identification of illegal miners much harder.

This will add to the headwinds which we have previously identified to cracking down on the practice, notably inadequate resources for law enforcement and government fears about undermining Chinese investment.

The ongoing prevalence of galamsey could threaten Ghana’s agricultural production, in turn increasing the risk of social unrest and heightening potential for ethnic tens ions between the influx of Chinese workers into Ghana and the local populations.

This risk will become especially prevalent if the impression grows that the government is unwilling to act against Chinese galamseyers as it is reluctant to crack down hard on the citizens of its biggest trade partner and a major foreign investor.

In light of the latest development – which we believe risks increasing the prevalence of galamsey – we have downgraded our short-term political risk index (STPRI) score for social stability slightly from 45 out of 100 to 42.5, bringing the overall STPRI down from 71.7 to 71. 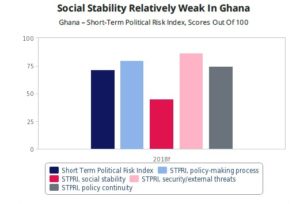 Crackdown on illegal mining to be largely unsuccessful

Galamsey will remain prevalent in the coming quarters, with efforts devoted to countering the practice set to be hampered by several key factors.

Firstly, the government stated in May 2018 that it will lift a ban on artisanal mining – put in place in 2017 – after coming under extensive pressure from legitimate small-scale miners.

We believe this will complicate the identification and prosecution of galamseyers as the distinction between leg al and illegal artisanal miners is often unclear.

Indeed, the ban was instituted in the first place to help the government isolate illegal miners and with it gone, many illegal miners will be able to utilise the ambiguity to resist detection and prosecution.

The end of the ban will also make process of identifying galamseyers much harder for the security forces, as rather than investigating all small-scale miners, the small task force will have to gather much more intelligence before launching any operations against miners, giving galamseyers more time to temporarily shut down operations or flee.

Secondly, the military task force assigned to counter galamsey is too small and poor relations between different branches of the security forces make the sharing of information and the coordination of efforts difficult.

The anti-galamsey task force is only 400 strong, and despite having arrested around 1,200 galamseyers in 2017 and early 2018, local media estimates that there are as many as 200,000 illegal miners operating across Ghana.

The efforts of the task force against galamsey will be further complicated by poor relations and overt hostility between different branches of law enforcement and the security forces.

For example, in May 2018 in the northern city of Tamale, police and military units began running gun battles with each other on the streets.

This suggests that effective, inter-service cooperation is unlikely to materialise in the short term.

Finally, we believe that the government may avoid the arrest or prosecution of the many Chinese galamseyers for fear of undermining Chinese support for government programmes and major economic projects.

Furthermore, the Ghanaian government has helped to broker US$15 billion worth of Chinese investments, likely making it difficult for Ghana to arrest and imprison Chinese citizens without causing difficulties with the Chinese government.

Indeed, there are numerous reports in local media of Chinese miners being released soon after arrest.

Although officially the Ghanaian government has affirmed its commitment to stamp out the practice there is a limit to how far they can pursue Chinese citizens without risking damaging relations with China, potentially undercutting growth prospects. 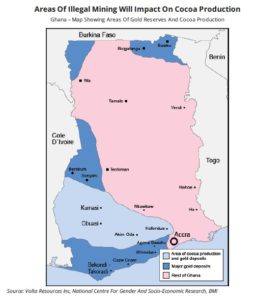 The use of mercury and other dangerous chemicals – including cyanide – by galamseyers is causing pollution of rivers, agricultural land and food supplies, making it likely that agricultural production will be impacted by galamsey in the long term.

Frequently the use of chemicals renders land and surrounding water tables and rivers toxic, damaging agricultural production and fishing.

Consequently, when cocoa prices have been weak and gold prices high, farmers have often been willing to sell or lease land to miners.

Cocoa is one of Ghana's chief exports and a major driver of economic growth, underscoring the risks to the economy if cocoa production is seriously impacted.

Indeed, Ghana’s official cocoa buyer Cocobod has said that pollution of agricultural land by galamseyers is the main threat to Ghana’s cocoa production.

If galamsey persists on its current scale then we anticipate that long-term agricultural production and economic growth would be negatively impacted.

…With fallout for social stability

With the agricultural sector a major driver of employment, the likely failure of the government to crack down on galamsey will increase the risk of social unrest enormously.

The destruction of agricultural land and the actions of illegal miners have already resulted in outbreaks of violence.

In 2016 galamseyers entered a leg al mine and by the end of the clashes, the military had been called in and 175 people had been killed.

Moreover, in numerous reported arrests of galamseyers in recent months, there is a high prevalence of firearms suggesting that there is s cope for tensions to turn violent very easily and quickly.

The ethnic dimension to galamsey could become an especially significant problem.

Indeed, there are already stories in the local media about Chinese female galamseyers using young women to entrap and then blackmail officials, leaving them immune to law enforcement, resulting in protests of Chinese miners in some regions.

Male Chinese galamseyers meanwhile are widely reported to be having children with locals before abandoning them, creating local resentment.

The types of stories – whether true or not – intensify distrust that already exists over the effects of galamsey on agriculture and water supplies.

What’s more, if the government is perceived as being unwilling or unable to crackdown on Chinese galamseyers , then the risk of large-scale violent attacks on Chinese people cannot be ruled out. 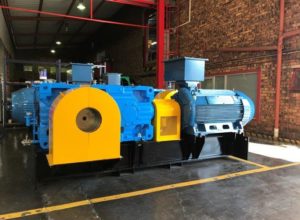