These middle risks are issues such as HIV/AIDS, the lack of transport and communication infrastructure, unclear implementation of legislation, corruption, and social issues such as the presence of artisanal miners. Broadly speaking, while the investment climate in Africa’s mining sector is more favourable than in the past as a result of a better political climate coupled with better mining legislation, the new risks require more management.

“The plus side, however, is that if the management of mining companies do the right things many of these community and socially related risks can be managed,” Cattaneo says. “One can mitigate risks related to changes in regimes by forming good relationships with a variety of stakeholders including the host government, local suppliers and forming joint ventures.”

Cattaneo advises that mining companies maintain control of such relationships and warns against passing the management of these over to agents.

“There also can be upside to forming alliances with other mining companies and taking an industry-based approach, while still ensuring that risk management of key relationships is not outsourced at a company level.”

Cattaneo says that a lot of mining companies do not have a strategy for managing political issues and points out that while having political risk insurance provides a useful safety net, it is not a strategy, whereas taking a broad view of political risks, possessing excellent information, proactively managing relationships, undertaking communications, engagement and training of local workforces as a matter of policy are.

Examples of risks that mining companies should look at include seeing how local government relates to national government, asking whether the regions where the mining projects are situated benefit from these projects. “Companies do have a lot of negotiating power and they must engage with local governments and communities. Failure to do so could create problems,” Cattaneo says.

“The Niger delta in Nigeria is an example of where this whole process has been mismanaged for decades by the oil sector.”

“At the same time it is very important to get away from patronage systems – and here it helps to work on an industry-wide basis as it can be difficult to do this alone. When funding social development it is important to ensure that the communities are fairly represented.”

Another of the areas where risk management focus is required is the management of legacy issues. Increasingly investors and other groups are asking how particular mining and exploration licenses were obtained. “These are the sorts of implications that are not built into a typical feasibility stage project study,” Cattaneo says.

He also says that the anti-mining NGOs will continue to exist and they will be watching countries such as the DRC in particular where the human rights record has been poor. “If the mining industry gets things right in such places then these NGOs will be less critical of the industry, but they are not going away.”

Cattaneo says that 10 to 15 years ago no one would notice how mining companies obtained their mineral rights, for example, but mining companies should not underestimate how the NGOs view the industry. “A solution might be for the industry to form partnerships with credible NGOs and look for common ground.”

There is a race for donor funding and NGOs look for stories and issues which they can leverage to their advantage in this quest. “The mining industry must not stick its head in the sand.”

Litigation is increasingly one of the new risks, with, for example, the USA’s Alien Tort Claims Act that sees companies with US assets being sued, having spiked upwards. Even frivolous law suits can do damage in the form of reputation damage, the waste of management time, and the expense and resources invested in fighting a legal case.

“This trend of litigation against companies means there is more pressure and scrutiny on management to ensure that any actions they take are publicly defensible.”

Here Cattaneo returns to the warning he made earlier. “If international companies rely on local partners that know who is who in their geographical areas and do not look too closely at where consultancy fees are paid this could come back to haunt them. Make sure your partners are representing your interests and don’t rely too much on these partners; rather negotiate with them what they can say and do.” 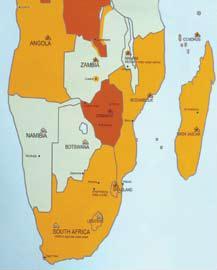 Overall so called safe reserves of minerals are becoming harder to find, in other words those in the developed world with, for example, at current mining rates the US having less than 35 years of copper reserves remaining, Peru only having about 30 years worth, Australia having less than 30 years worth of reserves and Chile already down to 25 years of remaining copper reserves.

The picture is similar in the gold sector where Australia’s gold reserves amount to less than 25 years of mining at current levels remaining, South Africa’s less than 20 years, the USA’s less than 15 years and Canada’s less than 10 years.

On the other hand developments such as the Kimberly Process have improved the risk profile of the diamond sector, though it is an evolution that was always going to feature a choppy implementation process.

The picture that becomes apparent is that the search for new reserves of minerals is taking companies to new regions, among which Africa is one of the most attractive in terms of its geological potential, improving political climate and relative attractiveness compared with Latin America. However, even then many countries in Africa have significant political risk, including Zimbabwe where the political risk is high and Angola, Burkina Faso, DRC, Central African Republic, Côte d’Ivoire and Guinea, where Control Risks describes the political risk as medium.

Companies are also looking to grow their assets through mergers and acquisitions and new partners can come with hidden liabilities and legacy issues.