Confirming this in an exclusive interview with Mining Review Africa, chief executive officer Mark Bristow reveals that – subject to a final feasibility study and conditions permitting – Randgold’s third gold mine in west Africa is scheduled to start production in Côte d’Ivoire in the second half of 2010. “There are definite indications that the Tongon project – 628 km north of Abidjan in the north of the country – will be pouring gold in three years’ time,” he says.

Incorporated in the Channel Islands in 1995, and listed on the London Stock Exchange in 1997, Randgold’s discoveries to date also include the 7.5 million ounce Morila deposit in southern Mali and the 6 million ounce-plus Yalea deposit at Loulo in western Mali.

“In 2006 we revised our 2002 pre-feasibility and upped the capital and operating costs for the Tongon project,” Bristow states. “Then, going back to drilling at the beginning of 2007, we moved in a number of rigs and drilled some 22 000 m of core so far this year. What’s happened is that we have demonstrated a significant extension to both ore bodies – the north and the south – and we have proved that the northern zone (never previously included in the prefeasibility) also has significant mineralisation. So suddenly the project is looking potentially a lot bigger than in our original estimates,” he adds.

In the trench at the Tongon
project in Côte d’Ivoire

BFS COMPLETE BY END 2008
“We have to complete the bankable feasibility study (BFS) by December 2008, with the intention of starting construction of the mine as of January 1 2009,” Bristow reveals, “and that includes getting all the licensing and permits in place, plus roads, dams, power stations, people, training, building, and so on. One of the things we were very keen to do was to test the scope so as to design the facilities to match the mine with the deposit,” he points out.

According to Bristow, with all the new information now available, the Board felt it prudent to re-scope the project for two reasons.

“First, we want to know what the optimum size would be, and to re-cost, broadly, the capital and operating costs; and second, although we’ve only planned to complete the BFS by the end of next year, we need a very good knowledge of the project by the end of this year, because we are going to have to go at risk ahead of the final report and order long-lead items,” he elaborates.

“We really need that information, as the lead time for some of the mill components is of the order 22 months, and our view is that we want to commission the mine during the course of the H2 of 2010,” he emphasises.

MINE WILL COST UP TO US$175 MILLION
Today, according to Bristow, the equivalent would be about US300/oz and US$175 million (R1.3 billion) for the same facility. “And if we were to increase that production to 250 000 or 300 000 ounces, the capital expenditure would jump above the US$200 million (R1.5 billion) mark, although operating costs would remain at around $300/ oz,” he calculates.

Tongon core in the foreground –
project offices in the background

The original minable resource for the deposit – announced in 2002 and revised last year – was 1.4 million oz at 3.54 g/t. The total resource is 3.1 million oz at 2.68g/t. “I must point out that we are converting those figures as we speak, and they will come out as an upgrading to the first measured and indicated resources in our next quarterly report in early November,” Bristow reveals. “This will be our first conversion to measured and indicated resources, and we see an upside in the total resources profile as well,” he adds.

“We have a US$10 million (R70 million) budget to take this project to BFS, starting at the beginning of this year and enduring till December 2008,” says Bristow. “Half of it is for the feasibility drilling, and the other half will be spent on the feasibility work – engineering, social and environmental impact studies, design, scheduling, and negotiation with government of the final working parameters. We are busy with all of this already,” he says.

“Looking ahead, an exciting development for us is that we have started getting information on some of the satellite deposits in the immediate vicinity, and our exploration is showing that this area is in a very significant setting geologically,” Bristow reveals. “We are particularly encouraged by the potential to add to the resource – not only by extending the current known deposits, but by finding new ones. And we are not short of opportunities – Côte d’Ivoire is one of the most unexplored countries in West Africa, and there are numerous other anomalies and opportunities for new discoveries.”

SENEGAL EXPLORATION PROJECT
Turning to Senegal, Randgold and IAMGOLD Corporation have concluded a joint venture agreement on IAMGOLD’s Bambadji gold project in the east of the country. The 343 km2 permit is adjacent to Randgold Resource’s Loulo mining complex across the border in Mali.

The open pit at Yalea

In terms of the agreement, Randgold Resources will earn a 51% stake in IAMGOLD’s interest in the project by funding and completing a pre-feasibility study. IAMGOLD can then retain a 49% interest by co-funding a full feasibility study or dilute to 35% by allowing Randgold to provide the full funding of a bankable feasibility study.

Bristow says the agreement extends and consolidates the company’s ground-holding in the Loulo region, which it believes to be one of the most prospective gold exploration areas in the world at present. “Past exploration on Bambadji has indicated the presence of favourable geology, geochemical anomalies and gold mineralisation with strong similarities to the Loulo project area,” he adds.

Randgold has no confirmed resource statistics for Bambadji at this stage. “What I can say is this,” Bristow explains. “Loulo is growing rapidly and Bambadji would be an extension of that. If you look at Loulo’s Yalea and Gara operations, you are talking about between two and three million-ounce deposits. While it would be foolish to try and pin down what a deposit at Bambadji would be, I can say that two or three million ounces is what the deposits come like in this terrain,” he insists.

“The project is still very far off the radar screen at this stage, but it will double our presence in Senegal. I can also say that the next big discovery and development of a gold mine would be the first major gold mine in Senegal, and if we were to discover it, it would be our first one in the country,” Bristow claims.

EXPLORATION TEAM IN BAMBADJI
“We already have a team there completing an interpretation of the Senegal-Mali structural corridor, which includes a 25 m by 5 km gold in soil anomaly that has seen very little drilling,” he explains. “The next phase will be target generation and the design of field exploration programmes to start in the last quarter of this year,” he says.

“We will have finished our review of all the information by the end of the year, and then we will be able to progress towards defining drill targets. We’re not drilling at this stage, but we will be by the beginning of 2008,” Bristow contends.

“By the end of next year we will have spent about US$1 million (R7 million) – and subject to receiving good exploration results, to take it to any sort of decision we would spend between US$2 million (R14 million) and US$5 million (R35 million) over the next three to five years,” he points out.

According to Bristow, Bambadji has huge potential – but he hastens to point out that potential has to be taken to reality. “We believe that it is as prospective as the Loulo asset – same structure, same setting, same rock types, and significant mineralisation. One just has to vector into where you think it might be, and that’s our job,” he says.

“What is significant about the Bambadji project,” Bristow emphasises, “is that if you make a discovery, it is easy and quick to bring it into production because you have all the infrastructure and supporting structure nearby from the Loulo operation in Mali.” 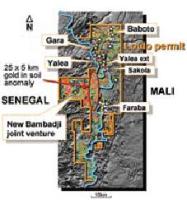 SHARED INFRASTRUCTURE
So setting up Bambadji would save both time and money through sharing infrastructure – there are a lot of synergies, even though it would be across-border.

Another big plus is Mittal’s significant iron ore operation which shares our footprint in the area. “They are going to be doing an enormous amount of sterilisation drilling, but we own the gold rights, so this will provide additional assistance,” he points out. “The very exciting thing is the infrastructure the Mittal project could bring to the region,” he adds.

“You cannot have an iron ore mine without infrastructure – and that includes a possible railway line. It’s a massive iron ore deposit, and they are talking about spending billions of dollars – so that is a factor which could make the area more accessible for smaller gold projects,” Bristow explains.

Bearing in mind that the average capital expenditure for mining projects in Africa breaks down into 40% on plant and equipment, and 60% on infrastructure – the savings for Bambabdji could amount to a significant proportion of that 60% infrastructure spend.

Moving on to Mali, the two underground mines in Randgold’s massive Loulo project are also on time and within budget.

The Yalea underground mine will be producing its first gold before the end of this year, and its mining rate will rise to 80 000 tpm – an increase of 60% on the originally planned 50 000 tpm over the next three years. Total ore reserve now stands at 3.63 million ounces, and life of mine is estimated at 18 years. Capital expenditure on this project over the first four years is calculated at US$65 million (more than R450 million), with ongoing development expenditure of US$3.8 million (close to R30 million) a year thereafter.

Hard at work underground at Yalea

GARA WILL PRODUCE IN 2009
The Gara underground mine is scheduled to produce its first gold in 2009, reaching an eventual mining rate of 100 000 tpm by 2014 – more than 60% above original calculations.

The total ore reserve is estimated at 1.38 million ounces, with a life of mine of 13 years. The project will cost a total of US$45 million (R220 million) over the first four years, with ongoing annual capital expenditure of US$5.5 million (almost R40 million) thereafter.

The Yalea and Gara open pit mines – on which Randgold spent some US$200 million (almost R1.5 billion), including the cost of the processing facility, and recent upgrades to power stations and infrastructure which will also service the underground mines – will cease to operate around 2014, but there will first be an overlap of four to five years with both the open pit and underground operations underway.

“In overall terms, we are forecasting an increase from 400 000 to more than 600 000 oz pa – that’s a 50% rise in production – between 2008 to 2011, and this includes absorbing the decline of Morila as it moves towards closure in 2011,” Bristow estimates. “If you compare this to the industry as a whole, industry gold production has been going down since 2001, and we are definitely opposing that trend, “he says.

“Overall gold industry production is in decline and costs are under pressure – primarily because gold production has shifted out of the traditional countries like Canada, the USA, Australia and South Africa, into third world, emerging countries, whether in Africa, South America or Russia. When you move into these emerging countries you have to carry more and more of the infrastructure, and it becomes much more expensive,” he concludes.