RSV Enco Consulting (Pty) Ltd (Enco), which becomes involved with projects from the exploration stage, is also active with a number of execution phase projects, and CEO Neels Engelbrecht says that from his experience, the ratio of projects currently progressing from the study phases to execution is about 5:2.

At the moment Enco is undertaking a significant amount of execution phase work in the coal sector. One of these projects is Sasol Mining’s Thubelisha mine where construction is underway and this is targeted for completion at the end of 2012. Enco is also due to begin site establishment on the Impumelelo project in Secunda this year for Sasol Mining.

The Impumelelo project, due for completion in October 2014, saw Enco awarded the contract for the engineering, procurement and construction and management (EPCM) of a new 8.5 million tonne a year coal mine, which is upgradable to 10.5 million tonnes a year. After the first section is delivered in 2014, the mine will build up to full production with 13 continuous miners and six stonework sections in 2016. The new mine will produce coal for the Sasol Synfuels plant.

The project includes the development of service, ventilation and decline shafts, as well as materials handling systems (including a 28 km overland conveyor, surface surge bunkers, underground conveyors and surge bins) and all supporting mine infrastructure.

Enco has also been awarded the detailed design and execution work for Total Coal South Africa’s new Dorstfontein East mine, near Kriel in Mpumalanga. Here, Enco will design and construct the mining operation to produce coal from an opencast mine at 3.6 million tonnes a year and process the ROM production in a coal processing plant. The product will be transported by overland conveyor to a rapid load-out terminal, which is connected to the Transnet Freight Rail system that services the Richards Bay Coal Terminal. Enco will undertake the engineering to cover the detail design of all areas, excluding the beneficiation plant, overland conveyor and product stockpile arrangement at the rail loop. These designs will be done by others and reviewed/project managed by Enco. In addition to this project, Enco is also involved in various studies for Total Coal South Africa.

The company has also just been awarded the feasibility study of the Makhado project by Coal of Africa.

In addition, Enco is involved in a number of feasibility stage studies, including one for Xstrata’s Tweefontein project. It is undertaking a pre-feasibility study related to export and domestic coal production in the Waterberg for an Australian company, Resource Generation, and it is also doing due diligence work on Rand Uranium on behalf of the MSA Group.

This is indicative of the ongoing growth of Enco since its formation, about two years ago, a group focused on the mining and energy sectors in Africa. Engelbrecht, who also oversees the company’s Australian operation, says, “The mining sector globally has been through a difficult time, and during such times it cuts back on studies and planned projects and focuses on its operations that generate cash. However, now we are seeing some studies being released. There are positive signs, but no fireworks at this point.”

In terms of commodities, Engelbrecht says that the coal sector remains strong, while iron ore has raised its head as an area of interest. However, he does see base metal projects in South Africa encountering problems due to a lack of power availability.

Apart from the presence in Australia, the company has a branch in Arizona, USA, and a company in Mozambique where it remains involved with Riversdale in support of the owner’s team. It set up the office in Mozambique after it was appointed by Riversdale for site establishment works on the Benga project. 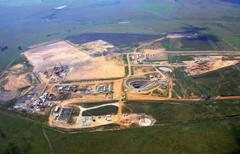 A bird’s eye view of the Thubelisha site
near Secunda.

That work included the design of bulk earthworks and terracing for the plant and office facilities, water distribution and management system, provision of power, and preparation of the site for construction activities.

Engelbrecht says that Enco has two quite different skill sets that come to the fore at different times, the transition between these skill sets usually occurring when the project goes through its bankable feasibility stage.

The first skill set applies during the exploration stage of projects and Enco can manage this phase of a venture. It does not have its own geologists, but will interact with the competent person’s report process and undertake the scoping and pre-feasibility work. The company has two mining and resource specialists, Ian MacFarlane and Michael Wright who usually head up the projects during this phase.

“We will then move on with the project as it goes into the feasibility stage, and it is at this point, as it enters the construction and execution phases, that a different set of skills comes into play,” Engelbrecht says.

Enco can take a project through that transition phase, take the plan which has been prepared up till then and make it work.

The execution phase takes into account issues such as contract management and in particular safety, where Engelbrecht says the company stays abreast of evolution of best practices. Enco subscribes to the RSV safety programme, Gear Up, a system that is designed to deliver expertise, and a broad knowledge base which can be implemented and applied in any dynamic work environment. Gear Up offers massive value with applied discipline from a dedicated and skilled work team.

Procurement, where the company is particularly strong, is also a critical aspect for a successful project and Enco’s Rodney Craig, who has a background working for Anglo and JCI, heads this section.

Enco’s plan is to become involved in projects during the early stages so that it is well positioned to undertake the execution phase, but of course not all projects progress from the study phase to the point where they actually go ahead. “At the moment the ratio is about 5:2,” Engelbrecht says. “In good times when companies have more risk capital, this ratio is higher, but now many of the projects being assessed are those with a sound basis.”

With the mining industry being a global one, the levels of activity in mining districts such as Australia are not substantially different from those in Southern Africa. “There are major differences of course,” Engelbrecht says. “The labour force in Australia is more skilled while in South Africa it requires more people to undertake a project, which also has safety implications. Also in Australia there are more juniors compared with this region. Another variation is the difference in contract philosophy with Australia being more litigious whereas the approach in South Africa provides a good balance to enable the job to be done.”

Going forward, Enco has focused both inwardly and outwardly. “Inwardly we have spent a lot of time and money on systems development. An example is on the project management side where we have invested in project management tools and on developing our people. We use the Project Management Book of Knowledge (PMBOK) principles.

“Looking outwardly we continue to target the energy sector as well as the mining sector, with Africa being our focus. Uranium is one of the areas of particular interest,” Engelbrecht concludes.