Montreal based SearchGold Resources has been undertaking definition drilling on the Bakoudou- Magnima gold project in Gabon that it shares with Moroccan group Managem. The goal of this drilling is to increase the proportion of measured resources in the final resource calculation of the orebody’s Zone A. This is part of a feasibility study underway on what is Gabon’s most advanced gold project. Archean rocks underlie approximately 50% of Gabon’s territory and the country’s gold potential for gold is severely undeveloped.

Bakoudou-Magnima is located in the south eastern part of the country, near the border with Congo-Brazzaville and sits about 55 km south west of the country’s second largest city, Franceville.

The mining company Comilog is active in the area and its main operations are located in Moanda, 45 km north of the Bakoudou-Magnima project. Moanda is a manganese mining centre as the deposits being exploited there represent about 25% of the world’s known reserves. 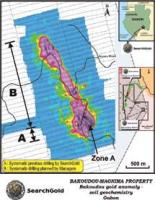 The Bakoudou-Magnima
project in Gabon

Work has been carried out in the Bakoudou area since the early eighties by essentially two parties; the French (Mostly Comilog and BRGM for regional studies) and Golden Gram Gabon / SearchGold. When SearchGold reactivated the project in 2003 sufficient geological and metallurgical information was available to initiate a scoping study.

SearchGold chose Zone A, located at the southern extremity of the Bakoudou gold corridor, to be the object of the scoping study because the density of information (drilling and pits) was sufficient and reliable enough to provide a reasonable estimate.

Once finalised, the study recommended the execution of a bankable feasibility study, and SearchGold established a logistical and operational base in Bakoumba, the town nearest to Bakoudou and mobilised the drilling equipment from Canada to Gabon.

In July 2005, SearchGold signed a strategic joint venture agreement on the Bakoudou-Magnima Gold Project with Managem, which earned 54% of SearchGold’s 90% initial interest in the project through a payment and work commitments, and it will acquire an additional 9% interest to take its shareholding to 63% in the project once it has completed the bankable feasibility study. Managem is the project operator and exploration and development programs are determined jointly by both SearchGold and Managem.

The objective of the study is the design of an openpit mine on Zone A and metallurgical test work has confirmed that gravity circuit processing allows a recovery of 88.25%. The study is being done on the basis of a 500,000 tonne a year operation.