Gem Diamonds, which was in cost cutting and cash preservation mode during 2009, has resumed its growth strategy by launching a special project to determine how to increase the value of its flagship Letseng mine in Lesotho.

Gem Diamonds owns 70% of Letseng Diamonds in partnership with the government of Lesotho, which owns the other 30%. Production at Letseng mine reached 91,000 carats last year, and is expected to be close to 100,000 carats in 2010.

Chief operating officer Alan Ashworth tells Mining Review Africa, “We have kicked off a project we wanted to start a year ago, but didn’t because we were in survival mode at that time. It comprises a suite of smaller projects associated with it in terms of recovery techniques, more appropriate plant equipment and new technology,” he says.

“An important part of the project will be to determine exactly what the optimum level of production should be. We know that the two million tonnes per annum (mtpa) of ore extracted from the satellite pit will not increase dramatically, but as far as the main pipe, which is much bigger, is concerned, we don’t know at this stage what the maximum extractable rate there is,” Ashworth says. “We have just commenced work on that aspect. Once we have established the maximum extraction rate, we will look at our treatment capacity to determine how best we can move towards treating that sort of tonnage. For example, should we modify the current plants, put up a third plant, or is there a smarter way of doing it?”

Gem Diamonds has not set a strict timeframe for the project as a whole, but has established a number of work-streams from its January kick-off and brainstorming session. “The maximum extractable rate, which is really the foundation of the whole exercise, should be determined by mid-year,” Ashworth estimates. “Meanwhile we are examining what technology we would consider appropriate, and where it could fit into the operation. We’ll be looking at different crushing techniques, possibly different recovery techniques, and we are also looking at preserving the physical integrity of the diamonds. The very good diamonds at Letseng are quite brittle, so anything we can do in terms of using better technology to reduce the damage should have a payback.

Aerial view of Gem’s Letseng
diamond mine in Lesotho

“The ore gets harder as we go deeper, so we need to address liberation and crushing techniques generally. And of course we are looking at ways of reducing the unit costs of treatment at the same time,” he continues.

All the early work should be over in the first half of this year, which should give the company potential targets to aim at. “We may decide to adopt a phased approach – it’s unlikely to be a single programme,” Ashworth believes.

“We may want to change crushers first to obtain, say, a 20% increase in production; then at a later stage we could put in another plant and pick it up by another 20% or 30%, and so on.

This switch from a cash preservation strategy to a growth initiative follows a particularly difficult period for the global mining industry – particularly the diamond mining sector.

“The period from late 2008 into early 2009 was obviously more than a hiccup. It was probably the worst recession ever in the diamond mining industry, and 2009 became very much a year of consolidation. We had significant impairments at the end of 2008, and we put a lot of the non-producing projects onto care and maintenance and concentrated on our two cash-generative mines, Letseng in Lesotho and Ellendale in Australia,” he adds.

“In the Central African Republic (CAR) we stopped everything at our Mambere concession. We retrenched the majority of the employees and only kept a minimal number looking after the mobile assets. We have been looking to sell that asset, but we have not been successful as yet,” he adds.

“In early 2009 we started cutting back on our Democratic Republic of Congo (DRC) operations, which comprised a number of alluvial diamond projects and a kimberlite exploration programme across three broad areas. We eventually sold all our assets there at the end of the year, but have retained the right to a percentage of any kimberlites discovered by the new owners in the future,” Ashworth says. 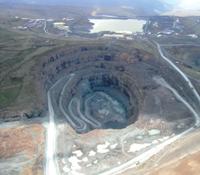 The satellite pipe at Letseng

“In Angola, we completed a pre-feasibility study of the Chiri kimberlites, but the project was not viable at the time. It was placed on care and maintenance, and we will have another look at this project as prices improve. We don’t own anything there – we did the work with an option to take a piece of the equity, which we still have,” he explains.

Gem Diamonds has largely suspended all work at its Gope project in Botswana, and has cut the resident team down to three people, but still has high hopes for the future of the project.

The government of Botswana has extended the validity of the retention licence to the end of this year. “We are reviewing the project, capital estimates, mining methodology and the mineral resource, and rehashing all the figures,” Ashworth says. “We are scheduled to make a presentation to the government in August, and we hope to reach an agreement with them regarding the exploitation of this deposit. It’s a long-term project, and it still looks exciting to me. It’s just a case of how and when we go about it,” he says.

The original feasibility study for Gope was based upon a six mtpa operation producing about a million carats a year. But the deposit sits under 70 or 80 metres of sand, and it’s also 160 km away from a power source and needs an access road. The up-front capital outlay would be quite large, and obviously to get pay-back on that one it would need to be quite a sizeable operation.

“In terms of mining methodology we are looking at whether it would be possible and viable to establish a small underground mine instead of the larger pit,” Ashworth reveals.

Reverting to Gem’s Letseng mine in Lesotho, the company says in its 2009 results presentation that in 2010 the mine is expected to process close to 15 million tonnes of ore, to yield its projected almost 100,000 carats.

The average price for 2009 at Letseng was US$1,894 per carat. “We certainly look forward to a higher price than that this year,” Ashworth says.

Indicated and inferred resources at Letseng at the end of 2009 stood at 222.6 million tonnes containing an estimated 3.7 million carats with an assumed in situ value of US$6.5 billion. Based on current prices and exchange rates this gives an economic life of mine for Letseng of more than of 25 years. 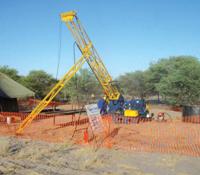 As far as nearside exploration to increase resources and extend life of mine is concerned, the only way to achieve this is to go down to greater depths. “We have debated it, and we decided that the expense of putting down a drill hole for that purpose only is not worthwhile at this stage. All it would do really is tell us that there is kimberlite there, which we are pretty sure of anyway,” he says. “And as far as other regional exploration is concerned, we are not considering it in Lesotho at the moment. There are other pipes and deposits in the area held by a variety of companies as a result of exploration back in the sixties and seventies,” he points out.

As far as Gem’s Ellendale mine in Australia is concerned, the company signed an off-take agreement with Tiffany’s towards the end of 2009 for the fancy yellow component of the mine’s production. “We have entered into a longterm agreement with them,” says Ashworth.

Ellendale produces about 200,000 carats a year, but the value is considerably lower than that of Letseng.

“So to sum up, we came through 2009 with both our cashgenerative mines operating well, and we are now moving back into our growth strategy in 2010 with our projects to generate expanded production at Letseng in Lesotho, and to extend mine life at Ellendale. We are continuing our beneficiation initiative, and have an action plan aimed at restarting our Gope project in Botswana,” he concludes.