South African-based Gold Fields Limited – the biggest operating gold force in Ghana with annual production of more than 900 000 oz from its Tarkwa and Damang mines – plans to boost its West African annual production to more than 1 Moz attributable within five years.

“My portfolio is to grow Gold Fields in West Africa to that level, and to achieve this we will not be confining our focus to Ghana,” said company executive vice president and head of its West African region, Peter Turner. “My duty is to look more broadly at West Africa,” he told Mining Review Africa.

“We are already busy with exploration in Ghana and in Mali, and we are looking at other opportunities in several other West African countries as well,” he said. “I cannot go into any detail at this early stage, because most of the preparatory work and discussion is confidential, but I can confirm that we are looking more broadly in the region, and that we are engaging in negotiation with various governments,” he added.

“Gold Fields is keen on expanding in this region, we believe there are opportunities, and we’ve got the brand, the franchise, and the business model that works in West Africa,” Turner emphasised. 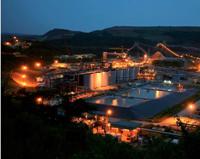 The CIL processing plant at
Tarkwa gold mine

MALI, SENEGAL OR COTE D’IVOIRE NEXT
“We prefer to do business in countries that are politically stable and business friendly, and most of the countries in this region – such as Senegal, Mali, Burkina Faso and Cote d’Ivoire – meet this requirement,” he claimed.

“Being in Accra gives us the ideal opportunity to gauge when to start exploration in our various neighbouring countries,” said Turner. It’s all about timing,” he insisted.

“In each case we have to measure risks and rewards, and decide if the risk profile of a particular project meets our investment criteria; we must understand clearly what we need to do; and then we must move when the timing is right,” Turner explained.

“It must also be borne in mind that my brief is the growth of Gold Fields in West Africa by which-ever method will best suite the profile of our company,” he added. “This means it can happen through exploration, through mergers and acquisitions, or through both, but our preference is to grow through exploration,” Turner declared.

“We cannot guarantee it at the moment, but we are reasonably confident of achieving our 1 Moz attributable from the West African region, he suggested. “We are keeping an eagle eye on all potential opportunities in the region with a specific view to achieving that 1 million mark. We would also consider opportunities further afield in Africa if they could add value to the Gold Fields stable,” Turner revealed.

Turning to the existing operations in Ghana, Gold Fields had invested a total of more than US$1 billion (R8 billion) in Tarkwa and Damang by the end of the last financial year on 30 June 2009. The downstream benefits to Ghana included such support infrastructure as roads, housing, schools, hospitals, the extension of electricity supply, on the job training and transfer of skills and technology.

GHANA TO AVERAGE 950 000 OZ
Annual average production for the two mines in Ghana over life of mine would be in the vicinity of 950 000oz. Tarkwa will continue for 12 to 13 years till 2021, given its 11.3Moz reserve, and at the moment – failing any new discoveries there – Damang will continue to 2018 – another eight to nine years.

Tarkwa – which is located about 300 km west of Accra – operates six open pits, two heap-leach facilities and CIL plants. It has just completed a big mill expansion project which is pushing mill throughput from 400 000 to 1 Mtpm. The CIL is the largest of its kind in the gold industry in Africa.

“We will then process 1 Mtpa through CIL and 1Mtpm through heap leaches. It’s a monster operation, and we expect resultant gold production to rise above 750 000 oz for 2009,” said Turner. Last year’s production at Tarkwa had dropped 7% to 646 100 oz. He went on to point out that average annual life of mine production would settle in excess of 750 000 oz pa.

Damang is in its 12th year of production, and operates the main pit plus five satellite pits. The mine has a 3.4Moz resource containing a 1.34 Moz reserve. Gold production last year amounted to 194 200 oz, and will reach 200 000 oz, and possibly more in 2009. Output for 2010 will be about the same. Current life of mine is expected to exceed eight years.

“At Damang, we are also busy with a process plant upgrade, putting a secondary crushing circuit in, essentially to be able to crush and mill harder product,” Turner revealed.

This has become necessary because as we are running out of soft oxide resource we are faced with high-grade hard rock,” he stated. “Therefore our ratio of hard to soft ore will be rising to almost 90% hard rock. We should still be able to maintain our current production ounces and throughput, because we will be improving the grade quality through the higher grade hard rock. This means we should be able to increase our production ounces,” he pointed out. Target date for the project is April 2010.

MILLION MARK A DIFFICULT TARGET
“One thing has become clear,” Turner emphasised. “It is seems unlikely that our current reserves in Ghana will enable us to achieve our goal of 1 Moz attributable – we are going to have to either physically start another mine or buy another mine – whether in Ghana, Mali, or elsewhere in West Africa – to reach the magic million,” he declared.

“Without a major discovery in our drilling programme at Damang over the next two years, I would say 1Moz from Ghana it is unlikely but not impossible,” Turner declared.

“Because Damang is already a mature mine, we are going to really be pushing exploration for the next two to three years with a view to establishing whether or not we will be able to extend life of mine. We will be putting at least US$10 million (nearly R80 million) a year into looking at additional exploration opportunities there,” Turner continued.

“We are also pushing intensive local exploration in areas close to our current operations with the emphasis on quality, and we are also actively pursuing tenements in other parts of Ghana,” he said.

“In terms of underground mining, Damang also has potential, and there are deposits called the Abosso Deeps that we will be exploring during the course of this year, he added. “We are about to start that exploration to test the deep level opportunities.”

At Tarkwa Gold Fields has actually explored and delineated the ore body and is drilling out the resource.

“All operations eventually come to an end, he pointed out. “What we really have to do is to keep on making new discoveries; to have new projects in the front-end of the pipeline; to ensure that we have enough exploration out there to fund the pipeline; and to ensure that exploration is progressing so that there are projects in development or reaching completion,” Turner concluded.