Having launched its R820 million Modder East operation, Gold One International is shifting focus to its other main projects at it reaches for its objective of 500,000 ounces of gold a year in less than five years time. 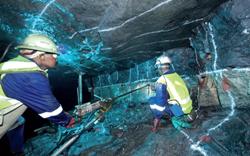 “Milling capacity will reach 70,000 tonnes per month (tpm) by the end of this year, rising to 100,000 tpm by the end of next year with the installation of a secondary crusher.”

A noteworthy aspect of the project was that the plant, originally earmarked for capital expenditure of about R320 million, eventually cost about R260 million. “One of the reasons for this was that, unlike most companies, we did the entire EPCM contract in-house,” Froneman says.

“As far as production costs are concerned, we are achieving our budgets, and our cost targets are US$330/oz for this year, dropping to US$250/oz once we are in steady state in 2011,” Froneman says.

“There are good reasons why our costs are lower than anyone else’s; it’s primarily to do with our shallow nature. At least 50% to 60% of costs in the deep level gold mining industry are related to labour. Bearing in mind that travelling time can take up about half of a shift in some deep level gold mines, this means they only really work for half a shift at the face. Not only that – the environmental conditions are quite harsh, and the rate of work in those conditions is much lower,” he notes.

“Our productivity should, therefore, in all rights be double that of deep level mining, and our labour costs would be about half.”

Of other projects, there are two parts to Gold One’s Sub- Nigel project. There is Sub-Nigel One, which is where the training takes place, and that will always be a small tonnage producer. Then there is Sub-Nigel Six (which consists of Vlakfontein West and the Spaarwater mine) which has a 5.6 million ounce inferred resource consisting of Main reef and Kimberley reefs.

A hydropower station at Modder East.

“This is essentially a brand new mine. It has the potential to be reopened at Vlakfontein West as a large mine mining virgin areas,” Froneman says.

“It would be a mine with a tonnage profile fairly similar to that of Modder. We don’t know the grades, so it’s hard to predict production.

“Our new in-house project team is dealing with both this and our Ventersburg project. Ventersburg has just moved into pre-feasibility phase and we are analysing the results there too,” he adds.

“We should be in a position to say something on both these projects by the end of this year when conceptual and pre-feasibility work will have been completed. We would then have to take both to feasibility, which will take us to about the end of 2011.

“I would like to think that our Modder East, Sub Nigel and Ventersburg projects will enable Gold One to become a mid-tier international gold producer heading towards, or even exceeding, our 500,000 ounce vision in the next five years or so.”

But there are more possibilities. "At Modder East, which is the first new East Rand gold mine to come into production in 28 years, the resource has not been fully delineated, and there is considerable upside on the Kimberley reefs. It could end up being double what it is today,” Froneman says.

“We believe the best way to expand the Kimberley resource is to get underground and put in the appropriate development, rather than trying to drill it from surface. In the course of the next few years we will be able to put out guidance on the way that resource is increasing.

The 345 m vertical shaft for
transportation of working
teams to the operating
faces at Modder East.

“We also have phase two, called the wide reefs, which underlie the Black reef horizon that would be mined in phase one. However, we have made a decision that this will only happen at the end of the mine’s current eight-year life, thus we already know where some of the life of mine extension is going to come from.”

“One exciting prospect, the Tulo property, right in the north of Mozambique about 20 km from Lake Malawi, has progressed and could even produce a little alluvial gold by the end of 2010,” Froneman suggests. “It is a very small operation at this stage. We acquired a mining licence and established access and an initial camp in the area. There is a lot of alluvial gold which we will mine initially just to finance the project and help fund further exploration.

“We want to access the site off the shore of Lake Malawi. We identified a harbour position, and purchased a boat which we use to move our supplies up and down. This is quite unique, but effective,” Froneman says.

“Our main interest is in the source of that alluvial gold. Obviously it came from somewhere, and we identified the source as vein-hosted deposits which we intend drilling and exploring.

“Our other Southern African prospect is the Etendeka project, a 64,000 hectare property in Namibia.”