Golden Pride to up production after year of low grade blending 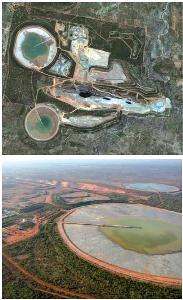 Resolute’s Gold Pride mine in Tanzania produced some 127,000 ounces of gold in 2009 at a cash cost of US$488 an ounce. Ore for the operations was sourced from the Golden Pride open pit and low grade oxide stockpiles. The ore is treated using conventional three stage crushing, ball milling and carbon-in-pulp processing.

In spite of an increase in tonnage processed, gold production in 2009 decreased from the previous year due to reduced grade from the open pit together with significant blending of low grade stockpiled ore for plant feed. Blending of this low grade oxide ore assisted with plant throughput and gold recoveries, with the overall cost per ounce marginally higher.

The open pit mined 5.0 million m3 of material at an increased strip ratio of 9.4:1 compared with a strip ratio of 4.8:1 in 2008. The increase in waste movement was predominately from the central pit cutback so that ore mining could commence towards year end. Waste stripping has also commenced on the western section of the open pit.

The Golden Pride mine has now produced in excess of 1.68 million ounces of gold since commissioning in 1998.

Resolute believes that this year should see an increase in gold production with ore grade from the open pit increasing as the fresher ore is exposed in the central pit. The majority of the ore from the central pit will be mined in the first half of the year so that weather conditions do not hinder mine production. Minimal ore will be exposed during the stripping of the western pit.

Plant throughput will decrease from the record tonnage of the past year. The increase in fresh material with a limited amount of low grade oxide blend will see a slowing of the circuit to maintain gold recoveries.

The Kavsav deposit located eight kilometres north-east of Golden Pride has been the principal focus for Resolute’s Tanzanian exploration team. The deposit was identified, after a detailed re-evaluation of the previous Anglo- Ashanti exploration data, and subsequent deeper reverse circulation and diamond drilling. This work has resulted in a large low grade resource being defined at Kavsav.