Founded in October 1915, and operating from headquarters in Port Elizabeth and Johannesburg with a manufacturing plant in Uitenhage, the company employs more than 400 people. It supplies superior quality conveyors, hose and power transmission products, with approximately 80% of production dedicated to producing conveyor belts for both the mining and industrial sectors.

A WIN-WIN BEE MODEL
In 2005 GEP began its move towards empowerment. For the next 18 months the company worked closely with the Secretariat of the South African Preferential Procurement Forum to form a win-win model for BEE compliance, the challenge being to implement transformation initiatives while at the same time educating a foreign shareholder base which remained largely uninformed about the previous imbalance in economic distribution.

According to David da Silva, director sales & marketing, Goodyear Engineered Products Europe & Africa, GEP took the time to understand the entire process of BEE compliance in order to do it right the first time. “As an international company there was no room for failure,” he says. “The company strongly believed that it owed it to both staff and shareholders to ensure that the highest technical and manufacturing skills were maintained in order to offer users the best possible products and services. Rushing in would have been a mistake, and each step taken evolved into a better plan.”

As GEP moved towards embracing the principles of BEE, it was clear that the process should make good business sense for all involved. Simply creating a “middle man” in the form of new distributorships would cause price increases and defeat the object of the exercise.

VALUABLE BEE PARTNERS ELECTED
GEP is operationally very strong and as such was determined to source strategic partners who would not only be BEE appointments but would also bring value to the company. It took almost six months to short-list potential shareholders, and only after extensive negotiations were the following partners elected and appointed.

Mr. Manne Dipico:
Manne Emsley Dipico matriculated at St Boniface High School in Kimberley. Between 1981-1984, he studied towards a BA (Personnel Management) at the University of Fort Hare in the Eastern Cape, later attending the University of Pennsylvania as part of the Wharton School’s Emerging Economic Leadership Programme.

Manne is a former Premier of the Northern Cape who served two terms in office spanning the decade between 1994 and 2004. He is the chairperson of Ponahalo Capital and vice-chairperson of De Beers Consolidated Mines. One of Mr. Dipico’s many accolades includes his appointment as parliamentary counsellor to President Thabo Mbeki in April 2004.

Anthony started his career in human resources management in the mining industry with De Beers Consolidated Mines, has worked for Samancor, and has held various senior positions. He is currently chairman of FloorworX Africa and chief executive officer of Burk Mining, as well as a director of various companies.

She started her career as a Social Worker. This was followed by a senior management position with the North West Parks and Tourism Board, after which she joined the Council for Scientific and Industrial Research (CSIR) as senior manager, business development. In 2005 she took part in the Wits University Mining Executive Programme. She currently holds the position of chief executive at Kgare Resources.

GEP recognises that empowerment is sustainable only if there is proper skills transfer, and to this end complies fully with the Skills Development Act. Preferential procurement also supports Goodyear’s empowerment initiatives. The company is one of the industry leaders in procurement from companies owned and run by historically disadvantaged individuals. Black Economic Empowerment companies account for some 30% of procurement expenditure.

NEW SERVICE CENTRES
GEP is also committed to maintaining its status as the most tried and trusted in the business. The company strives to maintain a set of global values that ensure it remains the world’s finest manufacturer of engineered rubber products. In the mining industry, a day of downtime can cost millions of rands, and customers need to assess the risks of these opportunity costs against the costs of a good maintenance schedule and a quality product. With this in mind, GEP has committed itself to opening service centres in outlying ‘mine rich’ areas across the country.

Traditionally seen only as a supplier of products, GEP has made a strategic decision to focus also on the servicing of products sold to clients, as well as on training clients on how best to use the products they have purchased. The new service centres will be one-stop shops for supplying, installing, splicing and maintaining GEP conveyor belts.

The most recent branch to be launched was in Saldanha Bay in August, and another is scheduled to be opened in Francistown, Botswana in October. This initiative will guarantee optimal before- and after-sales service. The two new branches will operate along the same lines as GEP’s existing service centres in Kathu and Welkom, as part of the company’s mission to “add guts” to its business.

The service record of a product materially impacts on the life and output effectiveness of that item. Clients who are prepared to spend money on a high-end brand deserve to have easy access to the maintenance required to keep the product in optimum working condition. Customers who want to maximise belt life and efficiency would be wise to purchase a top quality product complemented by effective servicing and maintenance. GEP clients are encouraged to budget for predictive maintenance, which will ensure that the belt functions at optimal capacity. 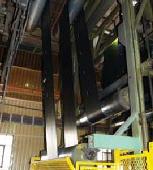 Part of the production process
at Goodyear’s factory

NEW PRODUCTS IN AFRICA
In line with its policy of expansion, GEP has also begun an aggressive drive into the rest of Southern Africa. Headed by export manager Chris Nicol, the division has the mandate to secure opportunities, as far afield as Ghana. (The Northern African countries fall under the directive of GEP Europe).

Significant progress has already been made in Tanzania which – because of its gold and nickel mines – is a ready market for underground conveyor belt solutions, and the company has been called on to supply products to the Tanzanian cement industry. Next in line is Zambia, followed by the DRC, the latter being particularly receptive due to foreign investor interest shown in the country’s copper mines.

Although GEP’s push north of the border has started with the provision of high-end conveyor belting to the mining industry, it won’t be long before the company starts looking at distributing other GEP products, such as petrol hoses, which will be distributed via existing pump distribution channels. The language barrier is a specific challenge facing the company in Africa, and for this reason it will seek out distributors who speak the language and use export houses based in South Africa.

Power transmission and automotive products will be sold through local distributors. These distributors will be required to commit to keeping adequate stock levels, thereby ensuring continued availability to the local market.

Although GEP faces fierce pricing competition from India and the Far East, many clients now realise that it is not only the short-term cost advantage that should be looked at, but rather the long-term durability and peace of mind that comes with buying into a well known brand like Goodyear.

GEP’s ultimate vision is to penetrate the African market with both products and service centres, thereby providing a holistic and integrated solution-based offering to clients. Plans are afoot to establish a service centre on the Zambian/DRC border in due course, to cater for both countries.