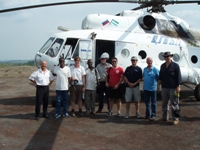 Mano River Resources Inc. (Mano) – the Toronto and AIM-listed exploration company focused on gold, diamonds and iron ore in West Africa – has come out earlier than expected with the announcement that it will go ahead with its Putu Range iron ore project in eastern Liberia.

The company holds an 80% interest in the project through its subsidiary, the African Iron Ore Group (AIOG). Its decision to give the project the green light comes in the wake of the positive conclusions of an independent technical report by SRK Consulting (U.K.) Limited.

“We intend fast-tracking the deposit to the pre-feasibility stage,” says Mano CEO Luis da Silva, “and we plan to undertake a scoping study on the transport and shipping options via the potential deep-water port at Greenville, only 100km southwest of Putu.”

SRK is of the opinion that there is a notable resource upside potential when considering the extent of the magnetic anomaly over a 12km strike length. Mano is targeting a potential resource of 900 million tonnes – well in excess of the historic estimate of 455 million tonnes at 45% iron – and SRK considers this to be a reasonable objective.

The SRK report emphasises, however, that the exploration of Jideh Mountain is in its infancy, and that the Mano target will have to be verified by further reconnaissance and drilling using modern techniques, without which the true nature of the ore types and grades remains speculative at this stage.

Mano is planning to start an initial drilling programme before the end of the current Q4 of 2007, and will focus on the eastern zone of Mount Jideh. In addition, a series of widely-spaced drill holes will be completed along the strike of the Mount Jideh magnetic anomaly.

Mano director Guy Pas says that at this stage the project is exhibiting many of the hallmarks of a sizeable iron ore deposit. “Potentially it could be significantly larger than initial estimates,” he contends.