As the Moma titanium minerals mine on the coast of northern Mozambique stands poised to reach full ilmenite, zircon and rutile production of 865,000 tpa this quarter, its owners have approved and raised funding for a US$245 million expansion project.

This expansion will boost its production by 50% to 1.3 million tonnes per annum (mtpa) from 2012.

The Moma operation, which contains one of the largest deposits of titanium-bearing mineral sands in the world, is wholly-owned by Kenmare Resources, quoted on the Irish and London Stock Exchanges. Moma is Kenmare’s principal project.

“We have overcome problems with the delivery of equipment, and with some circuits in the mineral separation plant not working as effectively as we had hoped, and Moma is back on track, and should reach its full production targets by mid-2010,” Kenmare managing director Michael Carvill tells Mining Review Africa.

“After these disappointments there has been a steady upward progression, and the present forecast is that we will be at 100% of our planned ilmenite recovery. That’s a rate of 800,000 tpa by the middle of this year,” Carvill says. “At that stage we will have reached 90% of zircon recovery, which will then move up gradually to 100%. That 90% will represent 45,000 tpa, of our ultimate objective for zircon of 50,000 tpa,” he adds.

“Rutile will have reached about 75% at that stage, and is unlikely to reach full production capacity,” Carvill continues. “We expect that we would rather reach 85% to 90%, which will be about 15,000 tpa. But rutile represents only about 5% of the total economic value of the project,” he explains, “and if we achieve even 80%, only 1% of the overall economic value of the project would be affected. It will probably be easier to push the ilmenite circuit just a little bit harder to make up that 1%,” he continues.

Aerial view of the mineral
separation plant at Moma

“Our original cost forecast for the project was US$410 million, but because it has taken longer it has of course cost more money. From the point that we decided to build this mine to the point where we started commercial production in mid-2009, our capital expenditure amounted to a total of about US$500 million,” Carvill says.

After a comprehensive study of current and future trends in the international titanium market, Kenmare decided to raise US$270 million through a share placement to fund a substantial expansion to the Moma mine.

“I am happy to report that this placement has just been implemented successfully. Although the shares were sold at about a 40% discount to market price, we were successful in raising the full US$270 million we required,” Carvill says.

He confirms that Kenmare’s expansion study, which was completed in January this year, calculates the cost of the planned expansion at US$200 million. This includes a 10% contingency. “That study had an accuracy of about 25%, so including that 25% we have allocated US$245 million to fully fund the expansion,” he states. The balance will be used for corporate purposes.

“This is a significant investment in expansion at Moma, and it is important to understand the reasoning that motivated Kenmare to go ahead with the project,” Carvill suggests.

“We believe that we are due for a period of abovetrendline growth in pigment demand, and we expect that to last for five to seven years,” he explains. “And that is not purely Kenmare sentiment. Most commentators agree with that view. For example, Dupont recently stated that they expected growth of between 5% and 10%, while trendline growth stands at only 3%,” he adds.

“Demand growth, driven by a cyclical recovery and increased demand from China and other developing economies such as India and Malaysia, is increasing at rates above the average historic trend,” Carvill points out. “This, coupled with constrained supply, is expected to result in a titanium-minerals deficit by 2012,” he predicts.

“At the same time as we are experiencing this strong demand curve, existing producers are facing a set of difficult circumstances which constrains many of the major players from easily expanding their capacity,” he declares. 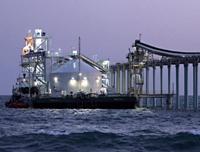 “Years of underinvestment in these minerals, due to the inadequate revenue realised by the feedstock market, has left the supply industry unable to respond sufficiently to increasing demand – hence we expect a significant supply deficit to remain, despite the expansion of Moma,” Carvill says.

“Looking at the main elements of the expansion, the second dredge pond is the first key element. Others include a wet high intensity magnetic separation (WHIMS) system in front of the mineral separation plant, which is a standard technology, but one that we did not have in our project previously,” Carvill explains. “It involves a separate plant in a stand-alone building, and we are also putting in an auxiliary ilmenite plant for additional processing capacity.

“We’re in the design phase at the moment, and we hope to allocate construction contracts by the middle of year,” says Carvill. “Our intention is to have the project mechanically complete by the end of 2011. Production will kick off at the beginning of 2012, and we have allocated a year for ramp-up to allow us to reach full production by the end of that year.”

The total resource under licence to Kenmare is 181 million tonnes of ilmenite, with 12.6 million tonnes of zircon and 4.1 million tonnes of rutile. “While an increase in this resource is certainly possible, we have not devoted any time to enhancing that number,” Carvill points out. “We believe that it is already a very large number, compared with our ability to mine it at the moment. We don’t see any need to demonstrate by drilling that we can push this up.”

The Moma ore body is in two distinct zones. One is called Namalope, which Kenmare is presently mining, and the other is called Nataka, which lies southwest of Namalope with the mineral separation plant between them.

Final product being loaded on to
Kenmare’s trans-shipment barge,
the Bronagh J, at its dedicated
shipping terminal

About 60% of the commercial value of the project and 50% of the revenue come from ilmenite, 35% from zircon and 5% from rutile. The zircon and rutile are sold on fixed volume variable price contracts with the price adjusted to market for each shipment. Of the ilmenite, 40% is sold on long-term, fixed price, fixed volume contracts. The rest is at fixed volume, annually price re-negotiated contracts.

“That 40% of fixed price, fixed volume contracts will continue in 2011, and then drops to only 18% in 2012. All of these figures refer only to the unexpanded project,” Carvill points out.

“We perceive that with the shortage it’s likely that ilmenite prices will move forward, and they have to do so substantially in order to justify further development, so we don’t want to go into any more fixed price contracts right now as far the expanded production is concerned.”

As far as other projects are concerned, Kenmare is not moving ahead with its other exploration activity in Mozambique.

“There is nothing really happening on this score, and there is no likelihood of anything happening in the foreseeable future. Our absolute focus for the moment will be directed at delivering the expansion at Moma on cost and on time,” he assures.

“Looking ahead, we believe that, with many of the developing countries now emerging, we can expect significant demand increases over the coming years, but we also think that there is a significant cost push in terms of being able to create titanium feed-stocks,” Carvill continues. “Hence there is no justification at present prices for meeting that rise in demand by increased supply. So it seems to me that there will either be rationing or an increase in supply, and I believe there will probably be a combination of the two. Prices will go up, which will to some extent dampen increases in demand, and at the same time there will be developments to increase supply,” he forecasts.

“As far as our Mozambique operation is concerned, we believe we have a huge resource which, if we manage to do our job right, has the opportunity to be at the bottom of the cost curve,” Carvill believes.