The Mandala project in Guinea operated by Stellar Diamonds entered commercial production in April this year. By the end of May it had processed over 7,600 carats at an average grade of 44 carats per hundred tonnes, including gem and non-gem diamonds.

Stellar is a diamond exploration and development company with a portfolio of properties and joint ventures in West and Central Africa, ranging from alluvial mine development in Guinea, underground bulk sampling in Sierra Leone, kimberlite pipe discoveries and bulk sampling in Liberia, through to grass roots exploration in Liberia and the Democratic Republic of Congo.

The Mandala alluvial diamond mine, 85% owned by Stellar commissioned its plant on 20th April 2009. The project comprises an independently verified diamond resource of 535,000 carats. 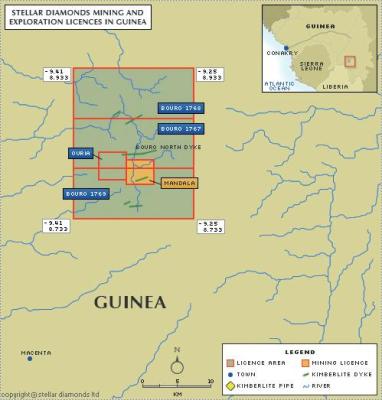 Since January, the 55 km access road from the town of Macenta to Mandala was rehabilitated and upgraded and the plant transported to site, where it was erected and commission- ed within eight weeks. The plant has a nameplate head feed of 100 tonnes an hour and a DMS capacity of 30 tonnes per hour. Diamond recovery is by Flowsort X-ray with a grease table backup, all performed under strict security conditions.

Commissioning and initial production material has come from numerous areas within the mining concession as Stellar Diamonds effectively embarked on large-scale bulk sampling to test the resource and the plant’s capability to handle the material. This led to the recovery of some 7,670 carats at an average grade of 0.88 carats/m3. The largest diamonds produced to date weigh 31.33, 12.94 and 10.93 carats, though these are not believed to be of gem quality. However, some excellent quality gemstones of 4.66, 3.98, 3.73 and 3.33 carats have been recovered.

Modifications to the plant will see the daily production increase from 300 m3/day to about 500 m3/day, equivalent to some 1,000 tonnes a day, in the near future.

Karl Smithson, CEO of Stellar says, “The initial grades at Mandala are high for an alluvial diamond project and, with the confirmed presence of some larger diamonds, bodes well for the future economics of the project.”