Anglo American’s Kleinkopje Colliery in Mpumalanga is an open cut operation that depends on its mechanised capability to meet demanding tonnage volumes. It recently expanded its fleet with the addition of a Caterpillar 994F wheel loader in September 2009.

One of South Africa’s largest collieries, Kleinkopje currently operates four pits, three of which produce export quality coal (namely 3A North, 2A North and 2A South), with the fourth (5 West) supplying virgin coal for the Eskom market. In terms of saleable product, the current overall run of mine annually is estimated at some 4.5 million tonnes.

Overburden stripping is carried out by dragline, with waste handled by the mine’s face shovels and coal loading performed chiefly by Kleinkopje’s Cat wheel loaders, which rotate to the various pits in terms of the daily production requirements. Some 70% of this workload falls on the shoulders of the Cat 994F, with its rated payload of 32 tonnes in high lift configuration.

As a high production loading tool,
the chief advantage that the Cat
994F offers is its manoeuvrability in the pit

Weighing in at around 195 tonnes, the 994 is Caterpillar’s largest wheel loader, and since it was first introduced in 1990 has become the undisputed global leader for this machine class. This reputation for durability and availability is underscored by an older unit running at Anglo Coal’s Kriel colliery, which has recorded more than 67,000 hours.

In performing its daily tasks, the Cat 994F comes equipped with Caterpillar’s field-proven 3516B HD EUI (High Displacement) turbocharged and aftercooled diesel engine. The engine delivers 1,072 kW at 1,600 rpm, a 14% increase when compared to the previous generation 994D’s 3516B power plant. A 32% torque rise translates into high lugging forces during digging, and acceleration in high rimpull conditions, for maximum efficiency and faster cycle times.

“As a high production loading tool, the chief advantage that the Cat 994F offers is its manoeuvrability in the pit, with the machine optimally designed to load well-fragmented materials in quick cycle times that minimise the crowding time for waiting trucks, particularly in the toe area of the cut,” explains Nico Coetzer, product and application manager: off-highway trucks and wheel loaders at Barloworld Equipment.” (Barloworld Equipment is the exclusive distributor of Caterpillar equipment in Southern Africa.)

“However, whilst production is always top of the list, safety is of equal importance,” Coetzer continues, “and in this respect, the Cat 994F has been designed from the ground up to ensure compliance with the highest global mining standards.”

Cat’s 10/10 Payload Policy
A case in point is Caterpillar’s 10/10 payload policy, which ensures that steering and braking systems have sufficient capacity to perform even at a 10% overload on the bucket, with fail-safe mechanisms installed. For example, the service brakes are actuated by modulated hydraulic pressure, while secondary and parking brake functions are spring applied and hydraulically released. This guarantees braking in the unlikely event of a complete hydraulic failure. The Cat 994F also has a backup steering system, which allows the operator to maintain control of the loader in the event of a failure in the main steering system.

For enhanced visibility during machine operations, Kleinkopje’s 994F has been fitted with a rear vision camera, providing a 115° field of view via a coloured monitor located in the cab, which enables the operator to see directly behind the loader.

Safety has also been built into the maintenance programme, with an engine shutoff and transmission lockout switch accessible via a panel at ground level.

Transmission lockout prevents gear engagement while the operator is not in the cab; whilst a starter lockout switch prevents the starter from being activated while a service is being performed.

“Given coal’s combustible nature, Kleinkopje has further boosted machine safety by including an additional line in the fire suppression system running below the engine,” Coetzer says, “with its own linear wire to pick up any possible fires starting on the belly plate. This extra line has its own dry powder and foam tank.”

Man & Machine Interface
Along with the power to perform is the Cat 994F’s ability to feedback critical machine information that ensures availability remains at the highest levels at Kleinkopje.

“In this respect, a key aspect of Caterpillar’s overall solution is the Vital Information Management System (VIMS) installed on the 994F, which enables machine owners to get the best possible return on their investment,” explains Niel Jordaan, a Cat certified salesman at Barloworld Equipment’s Middelburg branch and responsible for the Kleinkopje account.

“The VIMS system monitors more than 200 parameters and establishes a two-way communication, allowing the operator to make informed decisions that directly affect their safety, machine availability, and ultimately the productivity of the mine.”

As a condition monitoring tool, VIMS proves invaluable in terms of life cycle costing, simplifying troubleshooting, reducing downtime and lowering operating costs by identifying abnormal conditions well before they can cause extensive damage.

Adds Jordaan: “Downloaded payload information can also be used as an accounting tool, an indicator of cycle time efficiency, and truck overloading or under-loading, further providing an intelligent interface between man and machine.” 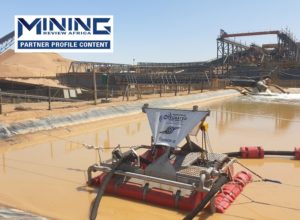