Homeland Energy Group, a Toronto-listed coal exploration and development company which has been producing in South Africa for less than a year, is poised to move ahead with other projects.

In an interview with Mining Review Africa, president and CEO Stephen Coates says two new planned operations would cost in excess of R1.2 billion in their entirety.

“Our first and only producing mine at this stage is the Kendal colliery, located near the Kendal power station, about 100 km east of Johannesburg in Mpumalanga Province,” Coates explains.

“We started digging in late April 2008, we produced our first tonnes from the pit in July, and we got into production in earnest in October. The ramp-up over nine months since then has taken us to the stage where we are doing close to 120,000 tonnes per month (tpm) run of mine, which is yielding 65,000 tpm of actual product.

During the April shut-down of the Kendal
colliery plant to install upgrades, the mine
continued to operate on schedule
creating a stockpile

“In other words, we are getting just over a 50% yield, and I believe that yield will increase further over the coming months, with our target being between 60,000 and 75,000 tpm of product. That’s full production as it stands,” Coates says, “but there is an expectation of a 50% increase in production in the first half of 2010, and that would involve the expansion of the current wash plant to add an additional 60,000 tpm of throughput capacity, namely a third unit which will raise run of mine production from 120,000 to 180,000 tpm. This would obviously push production to beyond 90,000 tpm.”

A major development for Homeland Energy is the recent granting of a mining right for the Eloff project, a significant coal resource largely mineable by open cast methods, which lies on the western extremity of the Witbank Coalfield, about 100 km east of Johannesburg and some 10 km south of Delmas in Mpumalanga. “The mining licence is for 500,000 tpm run of mine, and I understand that this is the largest licence issued in Mpumalanga in well over a decade, if not more,” Coates reveals.

“It’s very big operation, and will have a life of mine of decades, depending on how it ends up being mined,” he says. “The size of the deposit, its location and the coal being of generally lower quality, all make it most suitable for power station supply.

“If we are supplying a power station, that 500,000 tpm throughput would result in about 350,000 tpm of actual feed,” Coates points out. “Our belief is that Eloff could supply a mine-mouth power plant, but obviously there are a lot more players involved when it comes to something of that nature.”

The Eloff project has a total measured and indicated resource of 250.3 million tonnes, which according to SAMREC one can call a reserve, and the total inferred resource is 210.5 million tonnes.

“We have drilled the whole property, and there are a few holes that we need to finish drilling, about 30 that we need to reproduce. All of those will come in to our measured and indicated resource figure,” he says. 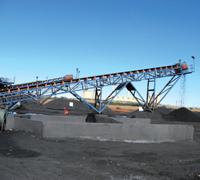 Kendal in full swing, coal
coming off the conveyor

As far as capital cost is concerned, Coates estimates that R1 billion would be a fair approximation for the type of operation required for Eloff. “That is of course subject to the finalisation of pre-feasibility and feasibility work, as well as an analysis of where the market is for this product,” he emphasises.

The first of the two key deadlines, the completion of pre-feasibility, was expected to have been completed as early as the end of July this year, followed by the second deadline, which will be the feasibility study. “That can often be a two-year process, but I don’t expect it to be nearly that long with us, because we have already done an extensive amount of the work that would be feasibility related,” Coates says.

“It will be about a year from now before we have completed the feasibility study, and can start to take actual development capital decisions, so Eloff is certainly two years-plus away from actually producing.”

Coates says that Homeland Energy is involved in further exploration aimed at bringing in increased reserves, resources and production.

“We are always looking for new opportunities. To leverage off current infrastructure makes sense, and we do have two other projects, Varsvlakfontein and Onbekend. Varsvlakfontein can be either a potential stand-alone mine, or a feeder into the Kendal plant.

“We are moving both properties forward in terms of desktop work and a little additional drilling is required, but they are fairly well advanced. In fact, I would say that both Vlakvarkfontein and Onbekend are beyond the exploration stage,” he says. “We are in the process of mine licence applications and pre-feasibility work for both projects. They are quite small and easily handled with our own internal cash flow, and we will move them along at their own pace. I am quite certain, however, that both of them will see the light of day in the next twelve to eighteen months.”

Onbekend is a small project. It is only a two to three million tonne resource of high quality coal, which might entail a 25,000 tpm operation. “In Varsvarkfontein’s case, however, the initial thoughts are that it could be in the 100,000 tpm range, similar to first stage of Kendal that has been completed, with expectations of a 10 to 12 million tonne resource. 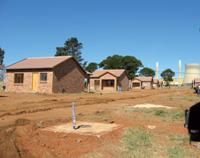 Turning to Homeland Energy’s marketing of its coal, current production from the Kendal mine is all sold locally, but Coates says, “this situation is not likely to continue indefinitely.”

He adds: “It has been and remains our plan to be able to produce some product for the export market as well. We believe that balance of business involves a suitable spread of risk between export and domestic product.”

Homeland Energy is in discussion with a number of potential export parties, and there has been interest from several of them. “Turkey, Europe and India have been the main areas of primary interest so far,” Coates confirms, “and I should think that we will very likely have our first export contract in place before the end of 2009.”

“In terms of other possibilities for projects, there are a lot of opportunities in South Africa, and a number of coal opportunities that are either under-funded or under-advanced technically, and need a technical and financial team to move in,” Coates ventures.

On the subject of other countries he says that Homeland Energy had some ongoing exploration in Botswana, but scaled that back recently to basic care and maintenance for the time being.

“It is our belief, however, that coal and coal assets will continue to be of increasing value to the marketplace. When the market warrants it, we will step up our operations in Botswana. We are also interested in Mozambique and Zimbabwe, and we continue to watch both those countries closely and review opportunities as they are presented to us.

Coates is one of three directors who have resigned from Homeland Energy to allow for the appointment of three directors nominated by the company’s largest shareholder, GMR Energy. Coates, however, did remain on as president and CEO throughout this transitional phase.