These are the main findings published in the PricewaterhouseCoopers report “Mine — Riding the Wave” — a review of global trends this year in the mining industry. The annual study is now in its fourth year, and provides a comprehensive analysis of the financial performance and position of the global mining industry. It looks at 40 of the world’s largest mining companies representing over 80% of the global industry by market capitalisation, and also discusses the current global trends affecting the sector.

“During 2006, the global mining industry witnessed some dramatic events,” says the report. “Takeover activity picked up from its rapid pace in 2005, and a number of ‘mega-deals’ were sealed during the course of the year, with Brazilian mining company Companhia Vale do Rio Doce (CVRD) leading the way, moving abroad to purchase Inco.” 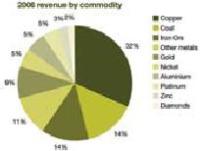 2007 LIKELY TO BE BETTER
Commenting on the situation, PricewaterhouseCoopers Global Mining Leader Hugh Cameron says: “With phenomenal results such as these, we couldn’t help asking ourselves whether this is as good as it gets. Even with the high production volumes we witnessed last year, demand is still outstripping supply driving higher commodity prices. This is handsomely rewarding those that invested at times when prices were low, despite supply side challenges that are impacting input and development costs across the board,” he adds.

Cameron makes the point that unprecedented demand, primarily driven by China, continues to increase. At the same time supply is static and struggling to catch demand, partially as a result of under-investment in the 1990’s. “There remains confidence that fundamentals will lead to the continuation of high commodity prices,” he emphasises.

“We don’t believe that 2006 was as good as it will get for the industry. Although challenges remain with cost control and supply shortages, the industry has entered 2007 on a very high note, and the fortunes of companies will depend on how they ride the wave.”

The impact of hedge funds on the mining industry has been felt particularly dramatically in the last two years, through their involvement in metal trading activities and the volatility this creates in commodity prices. The report suggests this trend will continue due to high cash flows and easily accessible funds.

The most significant challenge is the impact hedge funds can have on metal prices during cycle changes, it adds, and a number of significant derivative or physical positions may result in metal markets being destabilised. There are also growing indications of potential for private equity funds to share in the returns from the industry.

CHANGES IN TOP 40
The make-up of the top 40 makes interesting reading –— they have changed significantly, even just in the past four years, and this edition looks back at what has happened to those original top 40.

One third of the companies are no longer featured on the list. A period of significant consolidation funded by commodity prices has lead to nine being acquired by those in the remaining 27. Not only have the company names changed, but the sheer value of industry participants has also grown enormously, it adds. The 40th company in 2006 would have been 19th in 2003, based on its current market value.

The lowest market capitalisation has increased by 2.9 times and that of the largest by 2.2 times. Individually the net profit of each of the top four in 2006 is higher than the aggregated net profit of the top 40 companies in 2002.

One of the most striking changes in composition pointed out in the report is the reduction in the number of Canadian companies, down from 12 to six, due to acquisitions. A look at the market capitalisations of the emerging mining groups headquartered in Australia shows that a rejuvenation of mid-tier mining companies is well underway. Canada is also well positioned with its historically strong junior and mid tier sectors. The United Kingdom has now surpassed Canada as the top 40’s primary access point for capital, the report continues, and the emergence of Asia is also worthy of note, as there are now four companies domiciled in Asia, while in 2003 there were none.