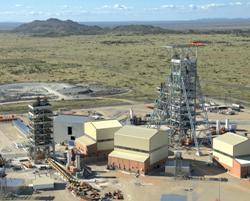 Winner of this year’s Steel Award in
the Mining and Industrial category
was Impala’s No 17 shaft.

The main shaft headgear of Impala Platinum’s No 17 Shaft won the Mining and Industrial Category at the 2009 Steel Awards. The judges said that while one’s immediate impression could be that a mine shaft headgear may not be an obvious choice for an award of this nature, the numerous exceptional qualities of the project made it an easy one.

The Steel Awards, held on the 3rd of September 2009 at the Vodadome in Midrand and simultaneously at the Sun Coast Casino in Durban, was hosted by the Southern African Institute of Steel Construction (SAISC).

“This was truly an outstanding steel project,” the judges said. “It embodied several qualities that made it stand both literally and figuratively head and shoulders above other entries.”

These qualities included it being the tallest steel headgear in the world; its expert design with the most modern winding gear technology; its well planned methods of erection that were built into the design; its topflight corrosion protection involving galvanising, hot metal spray and duplex paint coating guaranteeing a long maintenance-free life and its superb quality of workmanship.

The Impala No 17 shaft headgear can best be described as a propped centre tower with two sets of raking legs designed to accommodate Koepe winders at right-angles to one another. The connection of two raking legs, each 161 tonnes, to the centre tower was designed as a true pin connection. These legs were lifted into position in two sections, braced back to the main tower.

The floor levels were trial assembled in the workshop prior to delivery to site. The headgear was preassembled in modules adjacent to the shaft. This enabled Shaft Sinkers to continue with the pre-sink for as long as possible before the headgear erectors and shaft sinkers had to share the same area. These modules were assembled complete with flooring and hand railing to minimise the amount of work involved directly over the shaft. The largest of these modules, the first floor, was 130 tonnes.

The hoisting depth is 1,900 m making No 17 Shaft the deepest ground-mounted Koepe winder in the world. The design, erection and commissioning of the dual purpose headgear (1,650 tonnes in two years) was, in itself, a momentous task the judges said.

In addition, the interfacing of permanent condition, which will occur only four years after the commissioning of sinking condition, meant that all the engineering interfaces and change over requirements had to be resolved upfront. “This made steel the obvious material choice for construction.”

In terms of the use of steel on the headgear, the judges noted that some of the unique features of the headgear were the extensive use of tubular sections for bracing members, cruciform plate girders for columns and the size of some of the beams.

The judges said that it was patently obvious that the special client-contractor relationship played an important role in the success of this project. “For example, discussions around the design continued unabated throughout the project to optimise the design for constructability.”

The headgear was erected with no serious injury or lost time incident in 125,000 man-hours spread over six months. These man-hours included the intermediate and final coat corrosion protection, which were applied on site.