In time, IFM hopes to more than double production

International Ferro Metals (IFM) hopes to almost double production to more than 200,000 tpa this financial year, but the shortage of electricity and the global economic crisis has led the company to put on hold its multi-billion-rand expansion programme to more than double the company’s ferrochrome production within the next five years.

Sydney headquartered IFM, which produces 3.5% of the world’s ferrochrome supply, has its chromite mine and adjoining ferrochrome processing operations situated at Buffelsfontein in the North West Province, 100 km north-west of Johannesburg.

Construction of IFM’s existing facilities, involving the Lesedi mine, a pelletising and sintering plant, an ore beneficiation plant and two furnaces, began in October 2005 and was completed in February 2007. Overall capital outlay was R1.6 billion, and full production capacity is 267,000 tpa.

“Our open-pit Lesedi Mine can deliver 40,000 to 50,000 tonnes per month (tpm) run of mine, and we are putting in a lot of effort to ensure that the underground mine will deliver its planned output,” general manager operations Hannes Visser says.

“We have had to buy in chrome ore to be able to produce the quantities of ferrochrome we require. We were able to push the opencast production up as high as 60,000 tpm or more in certain months, but this still left us short of the 100,000 tpm we require,” he adds.

Sunrise over the IFM plant
at Buffelsfontein

“We are now developing the underground mine and some volume will start coming from the mine in November. Production will start ramping up in February, and by mid-2010 we should be processing some 100,000 tpm of chrome ore, which will yield about 65% to give us between 60,000 and 70,000 tpm from the underground operation.”

The Lesedi resource amounts to 23 million tonnes, of which 3.0 million tonnes is accessible via surface mining, giving IFM a life of mine of 15 years at the current rate of production.

“Besides continuing the Lesedi underground operation after the surface reserve has been exhausted, we have acquired the rights to the Sky Chrome property some 10 km away,” Visser says. “A new mine will be started there by IFM (80%) in partnership with the local tribe, the Bapo Ba Mogale (20%), and the 94 million tonne resource will ensure our self-sufficiency in chrome ore for in excess of 40 years.”

The past year proved very challenging for IFM as demand and prices plummeted from mid-2008, but the company responded quickly and cut production, focused on cost cutting, cash preservation and monetising inventory.

“We were already running at only 90% because of Eskom cutbacks,” he points out. “Then in early November we cut back to 60% of installed capacity, and at the end of November we made the decision to take both the furnaces completely off line. During the down-time we revamped both of the furnaces, installed new equipment, conducted various repairs to the furnace roofs and shells, improved the refractory linings, and also did some modifications downstream of the furnaces to improve handling of the hot metal,” Visser adds.

Improving demand and stronger ferrochrome prices in recent months enabled IFM to re-start both furnaces. “We recommissioned one of the furnaces in April, running first at 60% for a couple of months,” he explains. “The other furnace was re-commissioned in August and went straight to full production. Both furnaces are currently running at 100% of capacity.”

Needless to say, the effect of this shutdown had a detrimental effect on the company’s annual production, which dropped 46% in the financial year ended 30 June 2009 to 110,364 tonnes, compared to 205,607 tonnes the previous year. 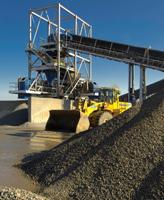 Final product being prepared
according to customer specification

Despite this drop, the company had a strong balance sheet at 30 June 2009 with R340 million in cash, and also secured a R500 million three-year working capital facility from the Bank of China. In July 2009 the company raised R284 million, mainly to fund its co-generation project.

“As far as production for the current financial year is concerned, we should exceed the 200,000 t level again,” Visser predicts. “We regard electricity as probably the scarcest commodity in our country at the moment, and we have embarked on a co-generation project that will generate electricity from the furnace off-gas. The installed capacity of the plant will be 17 MW, and it is scheduled to be commissioned in September of next year. This will provide close to 11% of our electricity requirement,” he calculates.

“There is a general expectation that Eskom tariffs will be increasing substantially once again in the near future. Supplementing our requirements from within like this, where we are not susceptible to price increases, obviously places us in a much better position,” Visser contends.

The other factor affecting revenue and profits is of course the price. “Prices are set quarterly in negotiations in Europe between the biggest producers and suppliers of ferrochrome, as well as the biggest consumer,” Visser explains. “Those prices set in Europe are normally used as the basis for all other price negotiations.”

Before the slump a year ago the price was as high as US$2.05 per pound of chrome, but this fell to around US$0.69 by early this year, and at those levels producers cannot make a profit. The price at present is around US$1.03/lb.

Currently China takes about 60% of IFM’s ferrochrome, Europe 25 to 30%, and the balance goes to the United States.

The company has two furnaces, one 400,000 tpa pelletising and sintering plant, a 1.0 mtpa ore beneficiation plant and the Lesedi mine.

“Our expansion was of course put on hold in the wake of the slump in prices and demand last year, but we are now planning to move ahead as soon as possible,” Visser reveals. “Our intention is to increase capacity incrementally over the next four years using technology such as the co-generation plant. Once Eskom is in a position to supply electricity, IFM will review its larger expansion plans that originally anticipated an additional three new 66 MVA submerged arc closed furnaces, and an additional 700,000 tpa pelletising and sintering plant, a new 1.8 mtpa ore beneficiation plant, and the new Skychrome mine as a source of supply,” he adds. “In the mean time it is possible to obtain up to 30% increased capacity through technology,” Visser says.

Raw materials stockpile area
with furnaces in the background

“The whole expansion plan is being reviewed at the moment with the aim of achieving three objectives; optimal use of available electricity; and improved efficiency of the entire process in order to boost production,” Visser explains.

He points out that the major problem is obtaining confirmation and commitment from Eskom of details of its expansion timetable – latest available information suggests that the new Medupi power station at Ellisras should be on stream and able to provide the power IFM requires by 2013 or 2014.

“Bearing in mind that it takes some three years to develop a mine, we would need to start with the development of the new Skychrome mine as soon as possible,” he points out.

“We have already applied for a mining licence, which we hope to have by the end of the year. The three-year time-line from start of development to start of production in 2013 will slot in well as our Lesedi open-cast operation winds down,” Visser says.

“There is also a strong focus at the moment on improving our electricity efficiency, and we have informed Eskom that we will take a staggered approach in terms of the new furnaces. We will build them one at a time. Also, we are looking at some technology improvement on an alternative raw material reductant to further reduce the power consumption of the process.”

The stainless steel market has been growing by between 4% and 6% pa for the past 15 to 20 years, which implies that roughly every 10 years the ferrochrome industry needs to double its production to keep pace with demand.

“In general terms the ferrochrome industry is healthy,” Visser says. “I believe that we will see some new technologies being developed in our industry to improve the efficiency of electricity. We will see utilisation of lower grade ores, specifically UG2 platinum ore, and I think we will probably see some changes in legislation on the export of chrome, possibly the imposition of a duty on chrome ore,” he suggests.

“We at IFM have a strategy of growing. We want to grow faster than the South African industry in order to increase our market share. And we also want to improve our reserves through acquisitions – primarily of chrome, but also of some of the reductants, like coal,” Visser adds.

”Over 70% of the world’s chrome reserves are in Africa, and we believe that our ferrochrome production must reflect that. South Africa is currently producing some 3.4 mtpa of ferrochrome, and for 2008 world production is estimated at 7.5 mtpa” he says. “We are confident that the recent resumption in demand and stronger ferrochrome prices are sustainable, and that IFM is back on track to take advantage of this with an improved cost base.”