Indigenisation will not stop Mwana expansion

Mwana Africa does not expect the Zimbabwean government’s latest indigenisation promulgation to divert it from its plans to double current gold production at its recently re-opened Freda Rebecca mine by the end of this year.

Zimbabwe’s Indigenisation and Economic Empowerment Act instructs all companies worth more than US$500,000 operating in the country to arrange for 51% of their shares or interests to be owned by indigenous Zimbabweans within five years. A government promulgation on the 29th of January 2010 calls on all companies to submit a detailed indigenisation implementation plan by the 15th of April this year.

This announcement has sparked off widespread criticism and growing fear that this could be the final nail in the foreign investment coffin of Zimbabwe.

But Mwana Africa CEO Kalaa Mpinga states, “Talks between the various parties involved in the mining industry are underway, and are actually progressing very well. We are virtually at the point of agreement. I can tell you that there is consensus between the Ministry of Mines, the ministry of Indigenisation, the Ministry of Finance, and the Chamber of Mines that this 51/49% will be difficult to implement in the mining industry.

“We have been discussing a system whereby companies will be given indigenisation credits in terms of corporate and social responsibility requirements,” Mpinga continues. “My own view is that it is not going to be very different from the situation in South Africa,” he says.

“The text of the amendments to the Mining and Minerals Act has effectively been completed, and a document where the opposing views are being developed further is being prepared. All of this documentation has to be circulated to the various members for evaluation and feedback before the final draft is prepared for submission to parliament,” he says.

“Turning to our Zimbabwean operations, the re-opening of our Freda Rebecca mine, which is situated near Bindura, some 90 km north-east of Harare, involved an initial target of bringing the first phase of the project back into production within four to six months,” Mpinga says. 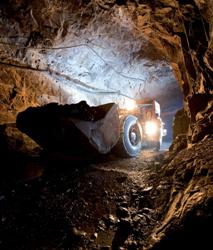 “We started production on schedule towards the end of September last year, and we produced our first gold in the first week of October. We are now milling at a rate of close to 50,000 tonnes per month (tpm), which yields some 2,500 ounces a month. Our actual target is 30,000 ounces a year, thus we are on target despite the usual commissioning problems,” he points out.

“We had to deal with an unusually large number of power cuts in December, and we were also faced with a number of challenges regarding the old mining equipment we tried to recycle. Phase one cost us about US$6 million as budgeted, and we are moving ahead with ordering new equipment ahead of time so that we can complete phase two as planned by the final quarter of this year,” Mpinga says.

“We are already hard at work on phase two, which is costing us another US$6 million, and will take us to 80,000 tpm through the mill, yielding an annual production of at least 50,000 ounces. We plan to hit this production level by September of this year.

Freda Rebecca has a resource of about a million ounces at 2.44 g/t, which means a life of mine of about 10 yearsplus.

Turning to finances, Mpinga reveals that Mwana Africa has negotiated a US$10 million facility with the Industrial Development Corporation (IDC). At the time of this interview more than 80% of the conditions precedent had been fulfilled by Mwana, and the final agreement is expected to be signed very soon.

The three main challenges facing Freda Rebecca all appear to have been faced and handled without any major problems occurring. “Our fears of labour problems did not really materialise, and we were able to recruit more than enough qualified engineers and artisans,” Mpinga says.

“Our power problem was solved when we switched to our Bindura power source from Cahora Bassa in Mozambique. We now have a reliable power supply, and are in a good position compared to our fellow gold producers in Zimbabwe,” he adds.

“And thirdly, we tackled the equipment problem by confining our spending on the phase two second mill and leach tanks, and devoting sufficient funds to the purchase of reliable new equipment,” he continues. 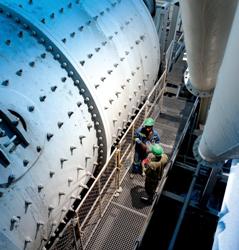 Looking down on the Freda Rebecca
SAG mill

“To sum up, things are moving well, and we cannot complain. I am very optimistic with regards to going forward in Zimbabwe,” says Mpinga.

“When I compare where we were 12 months ago with where we are today, the two situations are centuries apart. These improvements are just going to get stronger and stronger as we move into the future. There will be a few hiccups here and there, but I think that, generally speaking, the Zimbabwean mining industry is very well on its way to recovery.”