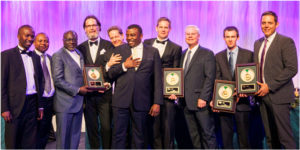 Democratic Republic of Congo – Robert Friedland, Executive Chairman of Ivanhoe Mines and Lars-Eric Johansson, Chief Executive Officer, announced today that members of the Ivanhoe Mines exploration team have received the prestigious Thayer Lindsley Award from the Prospectors & Developers Association of Canada (PDAC) for the discovery of the Kamoa Copper Deposit in the Democratic Republic of Congo (DRC).

The Thayer Lindsley International Discovery Award, which is presented annually by the PDAC, recognises an individual or a team of explorationists credited with a recent significant mineral discovery or series of discoveries anywhere in the world.

The award honours the memory of Thayer Lindsley, who was inducted into the Canadian Mining Hall of Fame in 1989 and was one of the most accomplished mine finders of the past century. Throughout Mr. Lindsley’s long and extraordinary career, he either founded or was involved in the development of many famous Canadian mining companies, including Falconbridge, Sherritt Gordon, Frobisher, Giant Yellowknife, Canadian Malartic and United Keno Hill. It is estimated that his geological and creative genius touched the fortunes of more than 185 mining companies throughout the world.

“The PDAC’s recognition of the efforts of key members of the Ivanhoe exploration team in the extraordinary Kamoa discovery is an honour and a proud achievement for our company,” says Friedland.

“Kamoa, which now ranks as Africa’s largest high-grade copper discovery and is the world’s largest undeveloped high-grade copper discovery, was formed more than 500 million years ago and was subsequently hidden under a thin layer of Kalahari sand for an estimated tens of millions of years. The discovery, first announced in April 2009, was the collaborative effort of a global team of exceptionally talented geologists, mine finders and financiers – creative thinkers and doers – with a deep esteem for science, technology and grass-roots exploration.

“The largest major copper discovery in the DRC since the early 1900s, Kamoa represents the discovery of a previously unrecognised and richly endowed district within the Central African Copperbelt – geologically distinct, yet geographically next door to the well-known Kolwezi deposits. We have a strong belief that the Copperbelt in DRC holds the potential for additional world-scale discoveries,” Friedland adds.