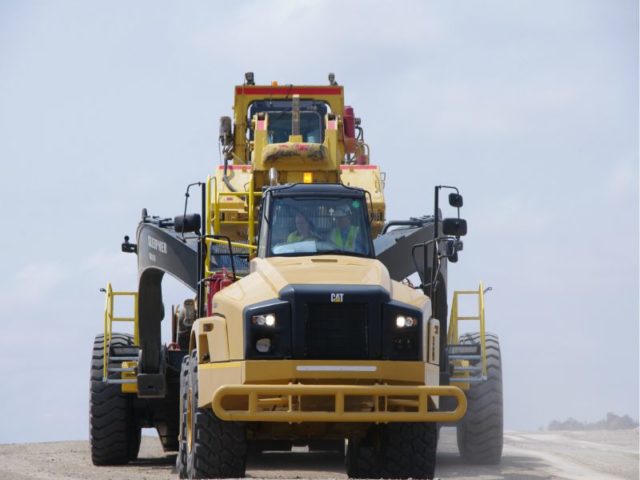 JCR Equipment has realized significant growth over the past six years, having recorded five sales in its first year as a Sleipner agent.

By the end of this year it will have a population of 46 mobility solutions in various mines across southern Africa.

Since the establishment of JCR Equipment in 2012 as the southern African distributor for the Finnish mobility solutions provider the company has experienced strong interest in the project range which tackles one of the industry’s longstanding problems of transporting large tracked equipment.

Headed up by MD Rory Hollins, JCR Equipment has grown from strength to strength on the back of Sleipner’s mobility solutions – the brainchild of Finnish excavator operator, Ossi Kortesalmi.

Kortesalmi developed the system as a way to overcome the loss of productivity and damage to machine undercarriages associated with moving tracked machinery around a mine.

The Sleipner system is a purpose-built and innovative mobility solution which can quickly load and safely move tracked or rubber-tyred earthmoving and mining equipment of virtually any size or nature to address the problem of machine wear and loss of production.

“Following the first few sales of Sleipner solutions in Africa, the idea of giving tracked machines a set of wheels for simpler transportation really took off in Africa,” says Hollins, who believes this growth trajectory is set to continue.

2018 was testament to the acceptance and growth of the Sleipner brand in Africa and was the best performing year in terms of sales that JCR Equipment has experienced in the last four years.

“Although the mining industry has certainly stabilised, we have not seen any large growth, but rather steady incremental growth,” says Hollins, noting that operations and projects that had temporarily been put on hold about two to three years ago, are finally gaining momentum.

This growth is certainly being felt by JCR Equipment who has signed orders with about 50% of customers who had previously shown interest in purchasing equipment when the mining industry rebounded.

Sleipner mobility solutions at a glance

The success of Sleipner was founded on the E-series of solutions, specifically for the transport of excavators – the ‘E’ stands for excavator.

The Sleipner E-Series, which is able to handle excavators ranging from 30 t through to 565 t, reduces the frequency for track and undercarriage repairs, significantly reducing maintenance costs, while also increasing operational flexibility and utilisation uptime.

With no additional equipment or operators required, the process of loading the excavator onto the Sleipner E-Series is simple.

The second product added to the line-up was the Sleipner DB-Series – the ‘DB’ stands for ‘drill’ and ‘bulldozer’. The is used for the transportation of bulldozers, drilling machines and other heavy tracked machines, even rubber-tyred equipment, weighing up to 120 t – which includes the largest of bulldozers currently available in the market.

The only product currently in the series, the DB120, has a hydraulically-controlled tilting travel bed with high ground clearance of 60 mm allowing for all-terrain operation. The DB120 is powered by an articulated dump truck – whose dump body has been removed.

The loaded unit can travel at speeds of up to 30 km/h, and its double articulated design – with a tuning radius of less than 11 m – ensures a high degree of manoeuvrability.

The DB120 is fitted standard with an innovative fail-to-safe, first-of-its-kind, emergency drag braking system, which eliminates the possibility of runaway of jack-knifing.

Since the start of 2018, all units of the DB120s delivered have been fitted with a full CAT 777 disk braking system on each of the four wheels or the DB120 which is fully integrated with the ADT braking system.

As part of its service offering, JCR Equipment completes a full mobility evaluation of a mining operation.

In doing so, the company can ensure that it is able to achieve fleet mobility of between 97% and 100% throughout the mining operations’ entire tracked equipment fleet as well as between 40% and 50% mobility of rubber-tyred equipment or ancillary equipment.

JCR Equipment, who has had a busy year delivering five units, is currently underway with its last three deliveries for 2018, says Hollins.

These include the delivery of DB120s to mining operations in Namibia, the Democratic Republic of Congo and South Africa.

Having attracted interest from the opencast contract mining sector, JCR Equipment’s second largest market apart from the owner operator market, launch its DB75, 75 t machine during the first half of 2018, aimed at addressing the needs for a smaller mobility solution aimed at the transport of Caterpillar D9 and D10 bulldozers.

Despite its success, Sleipner has not been resting on its laurels when it comes to product innovation, the company plans to launch to market its DB120 Mach 2 mobility system in Q1, 2019.

The difference between the original BD120 and DB120 Mach 2 is its ability to carry a larger size drill machine, Hollins explains, noting that the Mach 2 will be able to load the largest available Atlas Copco Pit Vipers currently on the market – the 271, 275 and 371 – the sizes of which falls outside of the DB120s load capacity.

“Although a niche product designed specifically for large hard rock drills, the DB120 Mach 2 will still be able to carry the same equipment as the original DB120, in addition to the drills,” says Hollins.

When asked about JCR Equipment’s strategy for 2019, Hollins noted “aggressive market growth is the future for JCR Equipment, predominantly targeting new Sleipner sales to both new and existing clients as a means to provide a full mining equipment mobility solution throughout Africa.

“While the principle of mining will ultimately remain a drill, blast and haul activity, it is the way in which you go about mining by using innovation, efficiency and new technology that will take the mining industry forward.”

“Sleipner is testament to using innovation as a means to reduce mining costs and optimise productivity, Hollins includes.