Tiger Resources, which is developing the Kipoi project in the Democratic Republic of Congo (DRC), is working on a high grade starter operation with a three year life while it does the feasibility work for a larger longer term mine.

“Kipoi has 12 kilometres of outcrops, and has been exposed to artisanal mining, but is essentially a greenfields deposit,” Tiger Resources joint managing director Brad Marwood says. The first drilling immediately returned good results with spectacular interceptions such as 100 metres at 8% copper and Tiger realised it had a project with great potential.

The project has seen two feasibility studies done, the first completed during September 2008. However, the conclusion of the first feasibility study coincided with the arrival of the global financial crisis and the project was re-evaluated to reduce initial capital expenditure requirements. 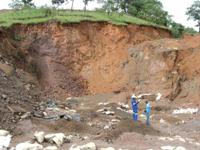 During 2009, JORC resources at the Kipoi North and Kileba South deposits expanded the overall resource base at the Kipoi project to 644,000 tonnes of copper.

The revised feasibility study for Kipoi, completed during 2009, looked at a high grade starter project, one with capital costs of only US$30 million. This will see a stage one project scheduled to begin production during the second half of 2010. It will use a HMS plant to produce a 25% concentrate, with the estimated cost for the plant and infrastructure being some US$12 million. The pre-strip and mining cost will be an estimated US$13 million.

The rationale behind producing the oxide copper concentrate is that the operation will be simple, and importantly, in addition to low capital costs, will achieve operating cash costs of US$0.34/lb with a fast track to production.

South African engineering group DRA was awarded a contract to review all process and infrastructure requirements for the stage one development and provide a lump sum proposal to undertake the design, construction and commissioning of the stage one project. The ore will be mined from the single pit in multiple stages and the anticipated stripping ratio will be 5.5:1.

The cash costs comprise US$0.21/lb mining costs and US$0.07/lb processing costs, with the rest attributed to general and administrative costs. Nedbank was selected to do the financing for the project and, subject to completion of due diligence, is providing a US$16 million facility. The remainder of the development costs are being funded via a subordinated debt facility provided by the off-taker. The off-taker for the material from the stage one project is Trafigura, the world’s second largest commodity trader, a company with a turnover of US$73 billion.

Pre-stripping will commence in the second quarter of 2010 and the Kipoi stage one project will have a life of three years. At copper prices in February 2010 this project will have a seven month payback period, and the phased approach taken towards developing it has derisked the whole venture.

The no-frills stage one project at Kipoi will achieve a mine throughput of 900,000 tonnes a year of material with an average copper grade of 7.15%. It will mine a total of 2.7 million tonnes of open pit ore and have a recovery rate of 60.83% amounting to 116,000 tonnes of copper.

“This stage one project will show the market that we can operate a project in the DRC and will lay the platform for the second stage,” Marwood says.

At the same time as stage one is underway, Tiger Resources will look at securing funding to achieve the stage two project at Kipoi. That would see the establishment of a SXEW plant including either leach pads or leach and solids liquids separation components. This is a more expensive venture and will cost some US$100 million to US$200 million (depending on the size of the plant built) for the long life project to process oxide ore containing less than 3% copper from Kipoi Central, Kipoi North, Kileba and other deposits.

The full feasibility study for the stage two project will be done over the next 18 months, and the initial focus is a SXEW plant with a 25,000 tonne a year capacity. This capacity would be expanded in stages, doubling within three years and eventually targeting 100,000 tonnes a year of production. The expected recovery of copper would be 80% to 90%.

In addition, further drilling will be undertaken to convert existing resources to reserves and develop a resource at the nearby Sase project which Tiger Resources also owns. Sase is located less than 25 km from Kipoi. At this stage, the group is not targeting sulphide resources, as this step will not be necessary for at least 15 years at Kipoi.

Like much of the Katanga copperbelt, Kipoi also has significant cobalt resources, and the ore from the stage one project will contain 0.65% cobalt. Tiger is looking at a low cost processing route for this cobalt. A possibility is production of cobalt salt within three years. There is a benefit of getting to the market sooner rather than later as cobalt is usually produced as a by-product, and major copper-cobalt projects in the DRC coming on stream are expected to push the cobalt price from its current level of about US$16/lb closer to its floor of about US$8/lb.

Taking into account the volatile political situation in the DRC, with the review of mining projects now over, the project should benefit from the fact that it will be in production before the next elections in 2012. It will have demonstrated that it is trying to mine and create opportunities, and the fact that the company did not leave during the tough times over the past two years should hold it in good stead. “Part of the reason we were able to stay was somewhat fortuitous. When the downturn struck we had completed a drilling campaign and were able to maintain a presence in the DRC while reviewing the exploration and scaling back a bit,” Marwood says.